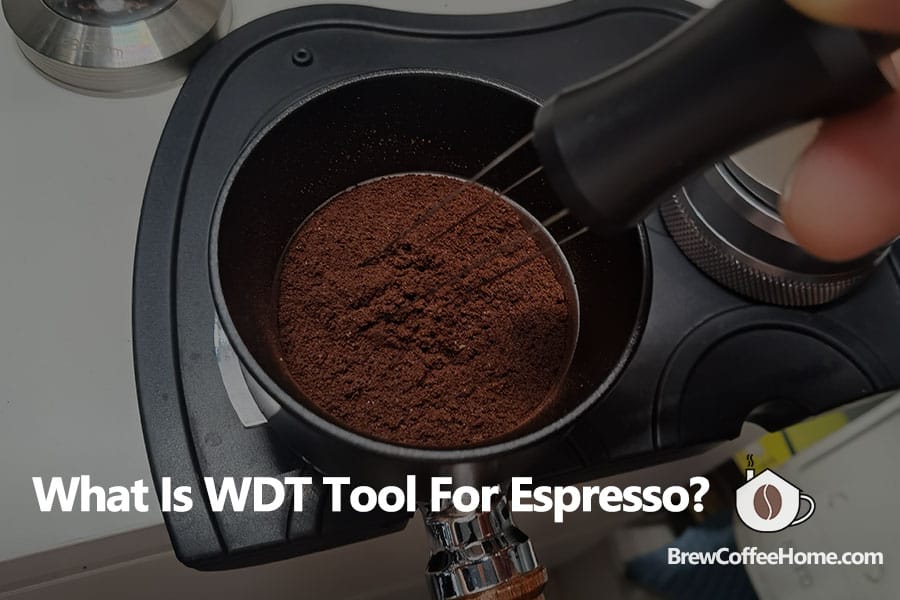 Many elements make a beautiful and flavorful espresso. However, one of the most important is the consistency of the extraction, which can acutely affect the flavor of the finished beverage.

Because espresso brewing has several important steps, it can easily overlook other aspects that can improve your espresso’s quality.

One such element is the distribution of the grounds in your portafilter. If the grounds are not distributed evenly or are clumped, it can lead to channeling, which creates uneven extraction and an unsatisfactory result.

But what’s the best way of ensuring you get an even bed of beautifully distributed grounds? Step forward to the Weiss Distribution Technique (WDT) – a deceptively simple means of helping you get even extraction.

But which is the best tool to use for the method, and are there some best practices to ensure that you’re employing the WDT most efficiently? This article examines those questions so you’ll know exactly what you need to use the WDT efficiently.

What Is WDT – Weiss Distribution Technique

WDT is short for the Weiss Distribution Technique. It’s a term that might put some people off as it sounds complex. However, it’s a deceptively straightforward method that helps domestic brewers make better espresso.

A WDT coffee distributor works as an espresso coffee stirrer. It has a few very thin needles that stir the grounds and remove larger lumps to offer a more even extraction.

Traditionally, baristas would distribute the grounds using a finger. Meanwhile, others would tap grounds before tamping. However, in recent years, many espresso lovers have begun using a wedge distributor tool to smooth the grounds to offer a flatter surface for easier tamping.

The WDT offers baristas an additional option for helping to distribute grounds. Also, its effectiveness is backed up by research, which proves that, if carried out correctly, it works better than other methods.

Why Do You Need A WDT Tool Or Espresso Coffee Stirrer?

While the WDT is effective, is it absolutely necessary to introduce need another step into the espresso brewing process? The short answer is “yes.”

Firstly, when you grind the coffee, the grounds fall directly into the portafilter basket and create a natural mound. However, while that’s not ideal, the situation is worse than that, because the mound is usually lopsided. So, there’s also usually a big gap between the grounds and the portafilter’s wall. Therefore, if you tamp down the grounds directly, the mound in the center will be denser than the grounds around the edges.

Secondly, clumps form easily when you grind beans using domestic espresso grinders. Since espresso grinds are fine, the grounds will squeeze together and remain clumped in the filter basket after tamping.

Hot water from coffee machines is harder to get through those denser areas and increases the water contact time. This increases the chance of channeling and promotes uneven extraction.

The WDT tool, together with other espresso tools, help you remove the clumps and distribute the grounds more evenly. This process helps improve extraction and, ultimately, the espresso flavor.

How Do You Know If WDT works?

If you tamp the ground coffee directly without WDT or proper puck preparation, you can observe the problem using a bottomless portafilter.

You will find the liquid first comes out from the edge of the basket and slowly makes its way to the center. So the center part of the puck actually is under-extracted and easily causes acidic flavors, while the outside ring of the puck is extracted a few seconds earlier, increasing the risk of over-extraction.

Even if you’ve leveled out the coffee bed before tamping, the clumps can still cause channeling. You’ll see spurting here and there. Since under such high pressure, water will find weaker areas to get through.

If you do the WDT right, you should see your espresso starts everywhere simultaneously from the bottom of your filter basket. That’s a good sign for more even extractions.

Pulling an espresso is not easy, the beverage size is just around 2 fl. oz, and the total brew time is so short. The extraction is so sensitive to the details.

There are several WDT tool designs, but the most common has between three and five thin needles attached to a holder, which can be made from a number of materials. For example, some use natural wood, while others are made from plastic or as a result of 3D printing.

As a rule, the diameter of the needles is between 0.2mm and 0.4mm, which is the ideal range. If the needles are thicker, they are more likely to compress the fine grinds, causing more clumping and channeling and defeating the purpose of the tool. Let’s take a closer look at some of the different types of WDT tools.

This type of tool combines a wedge distribution tool and a WDT. You use it by putting it on top of the portafilter basket and twisting it to move the needles around the grounds and break up the clumps.

With this tool, the needles don’t go far into the grounds. However, one of our favorite coffee YouTubers, Sprometheus, tested the extraction rate and found that the rate is very consistent despite this. It’s also extremely efficient. You can tamp the grounds after using it without needing to distribute again with an OCD-style wedge distributor. The biggest drawback is that the tool is expensive.

WDT With A Looped End

As its name suggests, this is a specially designed WDT with a looped end. However, most coffee experts don’t recommend it as it creates more clumping. It’s better to use sharp-ended needles for a better result.

If you enjoy DIY, you can make your own WDT tool inexpensively.

One way to do so is to take a cork top from a wine bottle and buy some acupuncture needles. Meanwhile, if you have a 3D printer, there are free files you can download for the holder.

Just make sure to check the diameter of the needles you use. Ideally, they need to be around as thick as a dissecting needle, and thinner than 0.4mm. We’ve seen domestic baristas make a WDT tool using tooth sticks or paper clips, but they are too thick and will cause clumping rather than remove it.

Best Practice To Use WDT Tools For Delicious Espresso

Even though using the WDT sounds straightforward, there are several ways to do it. Remember, the ultimate aim of to create a more even extraction.

Regardless of your chosen method, adding a dosing funnel to the top of the filter cup is always best. Without it, the grounds can easily spill onto the table and make a mess when you stir them. If this happens, you will not only lose several grams of grounds, but it will have a negative impact on the overall consistency.

Dosing funnels don’t cost much, and you can find one that fits the particular filter size of your machine. Here are the three main WDT methods.

As the name suggests, this method ensures the needles go deep into the grounds in the filter basket. Stir and move in overlapping circles to ensure the coffee powder is evenly distributed from the base. This can be done rigorously for around 10 seconds.

If any possible clumps at the base are broken up, lift the WDT tool a little higher and continue stirring until you achieve a very even bed of coffee.

This method is useful if you’re grinder creates a lot of clumps. However, on the downside, you’ll have lots of channeling if you don’t do the method well.

This is very similar to the deep WDT method and is the brainchild of John Buckman’s, the founder of Decent Espresso. This uses a common WDT tool with 0.4mm needles. Unfortunately, it was discovered that anything thicker than 0.6mm starts to compress the grounds. Meanwhile, if the needles are thinner than 0.3mm, they’re ineffective.

Buckman recommends that you grind directly into the filter basket and gently use a WDT tool to push the grounds on the surface until they level out. This removes the mound of the grounds. Then, tap the portafilter on a hard surface or portafilter mat to gently settle the grounds. Next, you can check the coffee bed and tweak the distribution until you have a consistent surface, then tamp.

This is the most suitable method if your grinder is good enough that it doesn’t create large clumps.

A comparison and analysis of different puck raking techniques were made. The results between deep WDT and puck raking were almost identical. However, it was found that puck raking has a higher puck resistance and higher peak pressure when brewing. However, the deep WDT offers a higher extraction rate.

Scott Rao recommends this method on his Instagram, and you can see him using it here.

Rather than the deep WDT method, you position the tool’s needles just beneath the coffee bed. Then, you move the tool around in a circular motion to level the top. Like puck raking, the shallow WDT method best suits domestic brewers with a better espresso grinder that creates largely clump-free grounds.

The Weiss Distribution Technique may appear almost inconsequential to espresso-brewing home baristas, but it can make a significant difference to the quality of the extraction of your drink.

However, while utilizing the method is surprisingly easy, and the tools needed to do so are inexpensive, there are still some things to be aware of to ensure you’re getting the best results.

That means taking into account elements including the quality of your grinder, the size of your portafilter, and – if you make your own WDT tool – the diameter and materials of the needles you use. A paper clip or tooth stick won’t do the trick.

Nevertheless, if you do your research, there’s no reason why you can’t benefit from the WDT quickly and easily, meaning that using less efficient methods of evenly distributing your grounds – like smoothing them out with a finger – can soon be a thing of the past, along with the inferior extraction those methods tend to bring.

Contents
1 What Is WDT – Weiss Distribution Technique
2 Why Do You Need A WDT Tool Or Espresso Coffee Stirrer?
3 Different Types Of WDT Tools
4 Best Practice To Use WDT Tools For Delicious Espresso
5 Final Thoughts