How Much Caffeine Is In A Nitro Cold Brew Coffee At Starbucks? 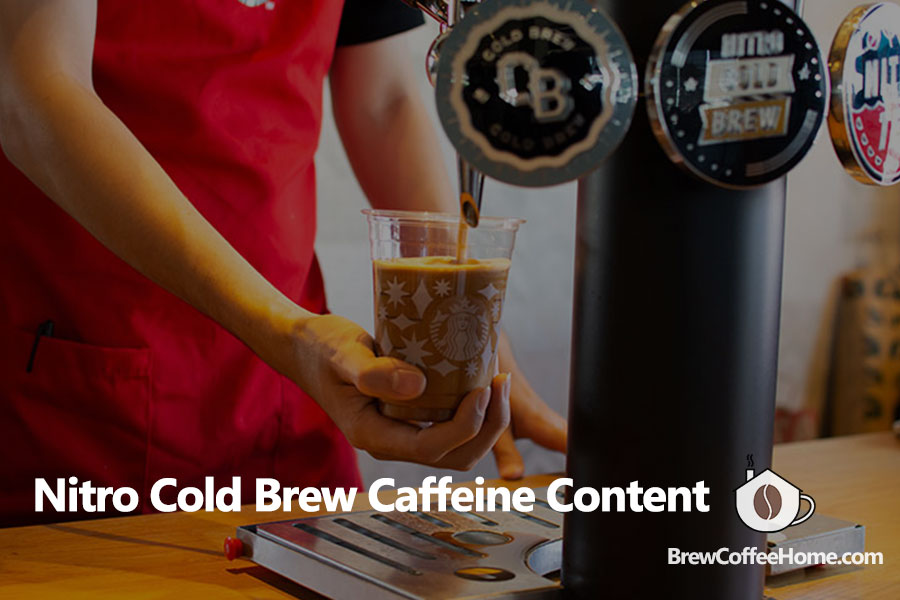 Starbucks’ latest creation, the Nitro Cold Brew, has silenced the sound of swirling iced coffee. The nitrogen-infused drink has been around for some time, but the latest changes to the beverage have created a buzz. The velvety-smooth cold coffee is bound to become the new summer obsession that will keep you awake and refreshed on a sunny, hot day.

Anyone who has yet to hear about it may wonder what the Nitro Cold Brew is all about. Before you run to your local Starbucks or grocery store, here’s some info on the cold brew.

What Is Starbucks Nitro Cold Brew?

Starbucks Nitro Cold Brew is their signature cold brew coffee infused with nitrogen gas as it pours from the tap.

At Starbucks, they steep the ground coffee beans in cold water for 20 hours. As it is poured from the tap and charged with nitrogen, the signature Cold Brew becomes the smooth, subtly sweet coffee drink. Most coffee shops serve nitro coffee in a similar way.

Nitrogen gas infusion is nothing to be concerned about. It is a colorless and odorless gas that creates a frothy texture. The taste and texture the nitrogen creates are the main reason for Nitro Cold Brew’s rising popularity. It’s also easy to make it yourself with the home nitro coffee makers.

The cold drink is creamier and has even lower acidity than the traditional cold brew. Even if you don’t drink coffee without milk or sweeteners, you’ll enjoy the natural sweetness the nitrogen provides. The flavors brought out by the nitrogen gas reduce the number of sweeteners you would need to add to your dark coffee and therefore have fewer calories.

Nitro Cold Brew is said to have certain benefits. It can promote weight loss by increasing your metabolic rate and stamina. Since it is less acidic than the standard cup of coffee, anyone who suffers from digestive issues may find this drink easier on the stomach.

The frothy drink also contains antioxidants that help the body fight toxicity and damage. In addition to the antioxidants, cold brewing also retains other essential nutrients from the coffee bean, such as manganese, potassium, and vitamins B2, B3, and B5. The antioxidants and natural sweetness help reduce the risk of diabetes and certain cancers.

How Much Caffeine Is in a Starbucks Nitro Cold Brew?

Unlike most coffee drinks served at Starbucks, the Nitro drink is only available in two cup sizes. The tall size cup of Nitro Cold Brew caffeine amounts per cup is 215 mg for the 12 oz and 280 mg for the grande size 16 oz.

Does Nitro Cold Brew Have More Caffeine Than Regular Cold Brews at Starbucks?

However, you can reach the same or greater level of caffeine with a larger size of Cold Brew. A venti Cold Brew has 275-310 mg, and the Trenta size has about 320-360 mg of caffeine.

The level of Nitro coffee caffeine, however, has nothing to do with the nitrogen gas. So the caffeine level of your homemade nitro cold brew coffee depends on the coffee beans you use, the grind size, and your brew time.

Nitro cold brews are made with strong coffee and are more concentrated than traditional drip coffee. It is typically served black without any add-ins as it does not require any. You get the most caffeine in a cup without any milk, ice, syrup, or sweetener.

Is Nitro Cold Brew the Most Caffeinated Drink at Starbucks?

However, venti nitro cold brew is not available on the menu. Based on other cup sizes, Nitro Cold Brew has less caffeine than other drinks in the larger venti size. A venti-sized regular brewed coffee, Cold Brew, Americano, and Iced Shaken Espresso contain about 300 mg or more caffeine.

You can enjoy the taste of Nitro Cold Brew from the comfort of your house or on the go if you can’t access your local coffee shop. Starbucks offers ready-to-drink Nitro Cold Brew cans available at select stores and online. All cans are 9.6 oz in size and come in various flavors, including:

The Black Unsweetened is the traditional Nitro Cold Brew flavor that contains 155 mg of caffeine per can.

The Vanilla Nitro can is enhanced with vanilla flavor and sweet cream and contains 110 mg of caffeine.

Is Starbucks Nitro Cold Brew Too Strong for You?

Caffeine can potentially have health benefits, but too much can pose a risk to your health. FDA suggests limiting your caffeine intake to 400 mg per day to prevent any dangerous, negative side effects.

Consuming too much caffeine can cause insomnia, anxiety, increased heart rate, nausea, headache, and dysphoria, a feeling of unhappiness.

According to the FDA standard, one grande cup of Nitro Cold Brew is within the limit and deemed safe. It is best to play it safe and avoid a second cup of the Cold Brew as it may be too much.

For taste, many people who enjoy Nitro Cold Brew prefer black coffee and do not find it too strong. Anyone who fears it may be too strong and prefers a lighter touch can dilute the strength of caffeine by adding sugar, flavored syrup, sweet cream, or milk. Keep in mind that add-ins will change the flavor and texture of the Nitro Cold Brew.

The Nitro Cold Brew from Starbucks is thick, creamy, sweet, and safely caffeinated. Slowly steeped for hours and then infused with nitrogen gas, this frothy Starbucks beverage offers you as much caffeine and creamy texture. Available in cans or at your local Starbucks location, all coffee lovers agree – the Nitro Cold Brew is the perfect addition to your list of favorite summer iced drinks.