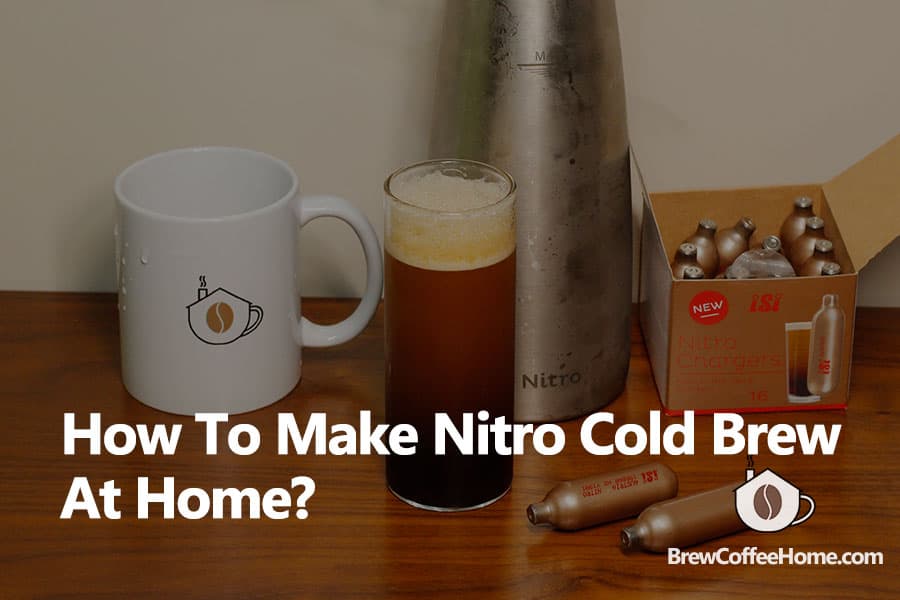 There are plenty of options for refreshing iced coffee. Still, one of the most interesting is nitro cold brew coffee, which combines a smooth mouthfeel, creamy head, and slightly sweet flavor to make it one of the most popular options.

There is a catch, though – it’s not cheap. Indeed, you can expect to pay around $6 for a Grande size (16oz) at Starbucks and similar amounts in specialty coffee shops.

Thankfully, there is a way around this. If you have the correct brewer, you can make nitro cold brew at home in batches of four glasses for less than $3, representing a substantial saving over the shop-bought alternative.

A few years ago, making nitro coffee was a more ad hoc process than today, often involving equipment from home brewing to perfect the drink. Nowadays, there are several options, and one of them, from the traditional baking world, is worth trying if you don’t want to spend more money on specialty equipment.

This guide will show you how to make beautiful nitro cold brew coffee at home.

There are two ways to get the cold brew coffee you need to make nitro cold brew. The simplest method is to buy it from the supermarket. This will speed the process up considerably, as you won’t face the relatively long waiting time needed for the regular cold brew coffee to extract fully. However, it is the more expensive option.

We recommend brewing your own cold brew concentrate to cut down on the cost. While the cold brew process takes time, it’s not complicated.

First, it involves grinding your coffee beans to a coarse size, then adding coffee grounds to a Mason jar or French press. Next, pour room temperature water or cold filtered water over the grounds and allow the liquid to steep for 18 and 24 hours.

Finally, you need to filter the grounds, and you’ll have a cold brew.

On the other hand, if you’re brewing ready-to-drink cold brew, a 1:10 or 1:12 coffee-to-water ratio will suffice. Here is a detailed cold brew coffee recipe.

To turn cold brew coffee into nitro coffee, you need a machine to diffuse gas into it. There are three options for this process: A standard whipped cream dispenser, a nitro coffee dispenser designed to use pure nitrogen gas, or a nitro keg kit.

Each has its advantages. For example, the least expensive option of the three is the whipped cream dispenser using N20. However, the nitro coffee dispenser with N2 gas will maximize the flavor, while the nitro keg system is excellent for large batches.

Nitrous oxide gas is readily available and cheaper than the alternative, making it a popular option for anyone brewing nitro brew coffee at home. It’s generally available in 8g capsules, but one issue is they produce nitro coffee that’s a little different than the type you’d buy at Starbucks. The N20 capsules produce more foam because nitrous oxide creates larger bubbles that don’t last as long in the glass. As a result, the mouthfeel also won’t be quite as creamy.

The foam on the coffee made with N20 capsules will resemble a frothy Guinness beer more closely, with the bubbles in suspension. In contrast, the N2 nitro coffee has a smaller head with tighter, smaller bubbles that are easier to pour. Those tight bubbles will also have a cascading effect – so they’ll move upwards through the beverage to the surface, which looks beautiful and enticing.

Many people prefer the smaller, longer-lasting bubbles and creamier mouthfeel of the N2 cartridges. However, they’re more expensive than the N20 cartridges and not as easy to find.

Regular whipped cream dispensers are inexpensive and readily available. There’s even a decent chance you’ll already have one, particularly if you enjoy baking. In the same way you dispense whipped cream, you need N20 gas capsules, which work out at less than $1 per serving.

Let’s look at the steps in greater detail.

Tip: When you pour Coke directly into a glass, carbon dioxide bubbles are larger so they can spill over. The same is true of the nitro coffee produced using N20 cartridges. The best practice is to slightly tilt the glass to give it the angle and dispense the coffee along the edge.

How To Make Nitro Cold Brew With A Nitro Dispenser

What Is A Nitro Dispenser?

That means it’s compatible with Nitrogen cartridges to offer that smoother texture and maximum flavor you’d find in your local coffee shop. You can make authentic nitrogen-infused coffee.

Generally, they have a capacity of either 16oz or 32oz, meaning you can make one or two cups per batch.

Step 1: Pour the cold brew into the carafe.

Step 3: Add your nitrogen cartridge and screw it on until it hisses.

Step 4: Give the canister a good shake for around 30 seconds to infuse the liquid and gas.

Step 5: Flip the canister down, then pull the trigger, so coffee dispenses into the glass.

Tip: Unlike the technique for pouring with the cream whipper, it’s preferable to pour directly into the glass when using a nitro dispenser because it creates more aesthetically pleasing layers.

Also, because those bubbles are far smaller than the ones produced by the N20, so you don’t need to concern yourself with too many bubbles appearing on top of the glass.

What Is The Nitro Keg System?

Using a mini-keg system such as the Royal Brew, there is a keg for pouring the coffee in, a cap with a valve, a spout with a handle, and a stout faucet for dispensing coffee. Like the other two options, it also uses a gas cartridge and is compatible with either type.

Nitro keg systems are usually larger than dispensers and often have capacities between 50oz and 64oz. As we mentioned earlier, this makes them ideal for large batches. Here’s how to use them.

Tip: Ensure you check the manual for specific instructions. Some keg systems and models require two nitrogen cartridges for a full keg of nitro coffee.

Do You Have To Use Cold Brew Coffee?

There are several reasons why nitro cold brew coffee is becoming increasingly popular, including the smooth mouthfeel, refreshing, less acidity, natural sweetness, and the aesthetic. However, you’re not restricted to using cold brews with the machines.

So, you can also use diluted espresso to make Americano, French press, AeroPress, and pour-over coffee. While none of these will offer as smooth a coffee as cold brew, they’re less time-consuming. You can play around with the coffee recipes with different brew methods.

Just ensure you chill the beverage using ice cubes before adding the coffee to the dispenser or keg. Then, use the machines like with cold brew for bubbly coffee with a creamy mouthfeel.

If you want to experiment even further, try making nitro tea, lemonade, or refreshing, bubbly beverages using other fruit juices.

Nitro cold brew is an increasingly popular summer coffee drink, but the price can be prohibitive when you buy it at Starbucks. Thankfully, there are solutions for making it far more cheaply at home, and you don’t even need a costly, specially built machine to do so. In fact, in the case of the whipped cream dispenser, there’s a good chance you already have all the equipment you need already.

And once the nitro coffee is brewed, you can store it in the fridge for up to two weeks. So that you can serve it immediately whenever you want, getting your morning cup and caffeine boost in no time.

If the idea of preparing traditional cold brew and the waiting time for it to brew puts you off, there are even options to get around that, including using other types of coffee, including pour-over and AeroPress.

Of course, if you want to replicate the Starbucks nitro cold brew as closely as possible, using cold brew with a keg system or nitro dispenser and N2 cartridges is the best option, which will work out as more expensive.

However, it’ll still be far cheaper compared to coffee-shop-bought nitro cold brew. Even better? You can enjoy beautiful nitro coffee from the convenience of your home, and you can have great fun brewing it, too.