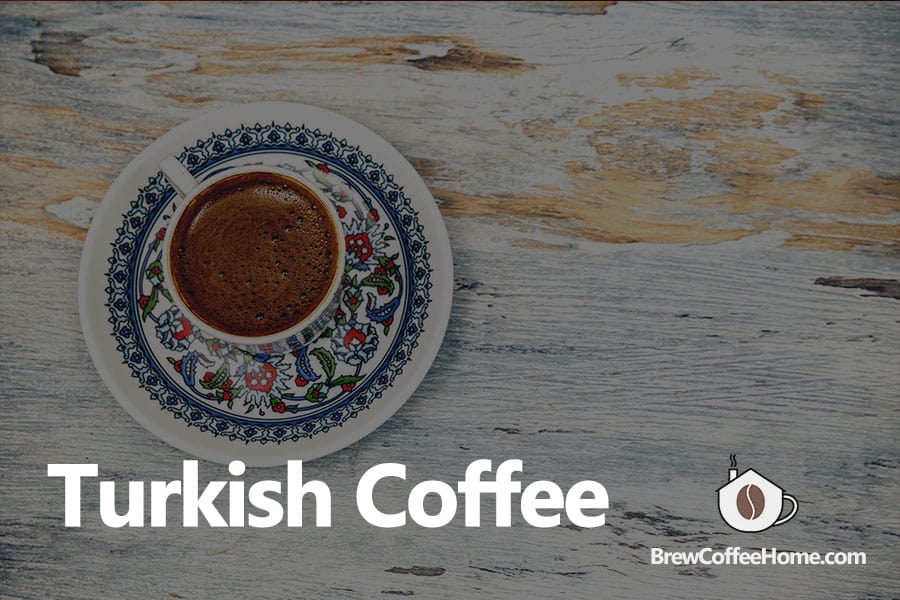 Brewing a superb cup of Turkish coffee is a great way to showcase your coffee-making abilities. It also differs greatly from other brewing methods, while the coffee it produces is both delicious and draws from centuries of tradition. It may sound complex, but it’s actually a relatively straightforward process. Making Turkish coffee can also make for a satisfying experience, while it will produce a beautiful coffee aroma as you do so.

This article details the origins of Turkish coffee and how to brew it at home, including the equipment you will need and the steps necessary to brew it correctly.

What Is Turkish Coffee?

Turkish coffee is a beverage that you brew using a coffee pot with a cezve (a long handle). You brew Turkish coffee with Arabica beans ground extremely finely, so it has a flour-like consistency. The coffee is unfiltered, meaning – somewhat unusually – that the grounds are included in the drink. You can also make Turkish coffee with a range of sweetness levels or even leave it unsweetened if you prefer. The finished product will be a thick, rich and satisfying coffee that you can enjoy at a sedate pace with family and friends.

One regular misconception is that Turkish coffee uses beans sourced in that country, similar to Ethiopian or Colombian coffee. However, that is not the case. Rather, whether or not you have Turkish coffee is determined by the brewing method.

Turkish coffee is frothy and thick with a robust smell. The brewing method can vary depending on the household and region. However, whichever variation you choose, it is relatively straightforward but will require practice to get the traditional (and crucial) foam on top that’s a feature of Turkish coffee.

There is a traditional way to serve Turkish coffee. It is poured into small, traditional cups. The coffee is not stirred either while brewing or afterward, so the grounds are not disturbed. Meanwhile, it should have a foam on top. You would often serve it with a glass of water to cleanse the palate because it’s such a strong drink. Another option is to serve it with either chocolate, Turkish delight, or other candies or desserts.

How To Make Turkish Coffee At Home

As we have already mentioned, brewing Turkish coffee is not difficult. However, you will require certain equipment to make traditional Turkish coffee.

A Turkish coffee maker is a pot known as a cezve in Turkey and called an ibrik elsewhere. They are generally fairly cheap to buy, although hand-crafted ones using better-quality materials and a beautiful design can be more pricey. There are different sizes to choose between, from brewers with a capacity of a few ounces for single-serve use to those that can hold upwards of 22 ounces. We reviewed the best traditional and electrical Turkish coffee makers for your reference.

Whichever ibrik you opt for, it’s necessary for making traditional Turkish coffee because it is crucial for helping the all-important foam reach the top, thanks to its small surface area.

Because Turkish coffee refers to a brewing method, rather than the source of the coffee beans, you can use any Arabica bean, but it must be very finely ground.

A standard hand coffee grinder or electric coffee grinder will not grind the beans finely enough. Even if your regular grinder does produce a fine enough grind, it isn’t designed for grinding that finely, so you could break the grinder or put too much strain on it, reducing its longevity. However, you can buy a Turkish grinder if you plan on drinking Turkish coffee regularly.

Traditional Turkish coffee cups are made of thin porcelain for retaining the coffee’s warmth. They are also small in size. Some cups have a copper holder with a lid, which also helps keep the beverage warm. The cups are a crucial element of a satisfying Turkish coffee.

The cup is also useful for measuring the amount of water you need to brew the coffee. For example, you will usually aim for one and a half cups of water for each serving cup.

While sugar is not essential, some people like to have their Turkish coffee sweetened. In Turkey, when being offered Turkish coffee, one of the main questions will be how you would like the coffee to be made. It would be remiss of the host not to ask how much sugar you would like. The answers will be as follows:

After the guests have stated their preferences, the brewer has the responsibility of preparing the coffee correctly. In Turkey, that falls to the household’s youngest female.

How To Make Turkish Coffee With An Ibrik/Cezve

With all the equipment and ingredients on hand, it is simple to brew traditional Turkish coffee by following these straightforward instructions: 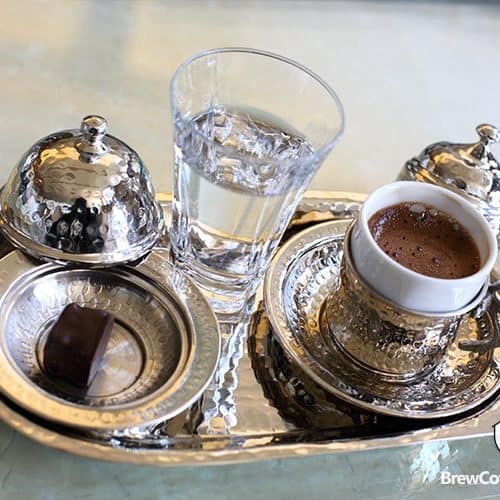 Making Turkish Coffee Without An Ibrik/Cezve

If you don’t have an ibrik or would simply like a smooth coffee you can brew on a stove, a small saucepan will suffice.

The brewing method is similar to using a cezve/ibrik.

Turkish coffee is bitter, which puts some people off trying it. However, that bitterness is usually a result of over-extraction. If you’re not a fan of the strong flavor, there are some ways to make it more palatable. These tweaks may not be in keeping with the traditions of Turkish coffee. However, they will reduce the bitterness.

If you begin brewing with water at this temperature rather than room temperature, the heating time will reduce to between two and two and a half minutes.

2. Add the coffee to the cup when the foam expands

Using a thermometer, we measured the real-time temperature while our coffee was brewed. At between 200F and 203F (94C to 95C), the foam expands, which is the correct time to pour. If you wait any longer, it will boil and burn the coffee.

Reheating the coffee generates more froth but takes longer to cool. This extended time at a higher temperature leads to over-extraction and greater bitterness.

Disturbance will lead to more coffee extraction. Except for stirring the coffee at the outset when the water is at a low temperature, don’t stir the coffee while heating or in the cup.

Syrian traders brought Turkish coffee to Istanbul in the 1500s [1]. Over time, its popularity grew until it became a central component of culture and tradition, becoming a factor in ceremonial roles such as marriage customs or political meetings. It even became important in fortune-telling rituals in some areas of the world.

Over the centuries, Turkish coffee has become popular in many areas of the world, including North Africa, the Middle East, and Eastern Europe.

The culture and tradition of Turkish coffee gained recognition from UNESCO on its Representative List of the Intangible Cultural Heritage of Humanity on Turkey’s behalf in 2013. [2]

Experimenting with a range of brewing methods is a rewarding experience for coffee fans. You don’t need to have access to an expensive coffee maker to brew beautiful coffee at home. Using a cheap Turkish coffee pot, you can easily brew traditional Turkish coffee that’s both enjoyable and beautiful.

If you follow the instructions we have given in this article, the process of brewing Turkish coffee should be enjoyable, relatively straightforward, and result in a beautiful beverage that you can either enjoy on your own or in valued company.

Turkish coffee is far more than a drink. Aside from its unique, robust taste, it also represents a lifestyle. Enjoying coffee is a social event that is pivotal in bringing friends, families, and communities together, and that’s particularly true of Turkish coffee. Don’t be afraid to take things slowly when drinking Turkish coffee, and enjoy the experience with your family and friends.

How do you produce the thick foam that sits on top of Turkish coffee?

The foam is the more crucial element of Turkish coffee. If you have struggled to generate the thick foam while brewing Turkish coffee, try this:
After you combine the coffee, sugar, and water, stir it three or four times, but don’t overdo it. For the initial pour, ensure you pour equal amounts in each cup, and the foam should appear. When you get to the second pour, make sure you do so very slowly to not break the foam. 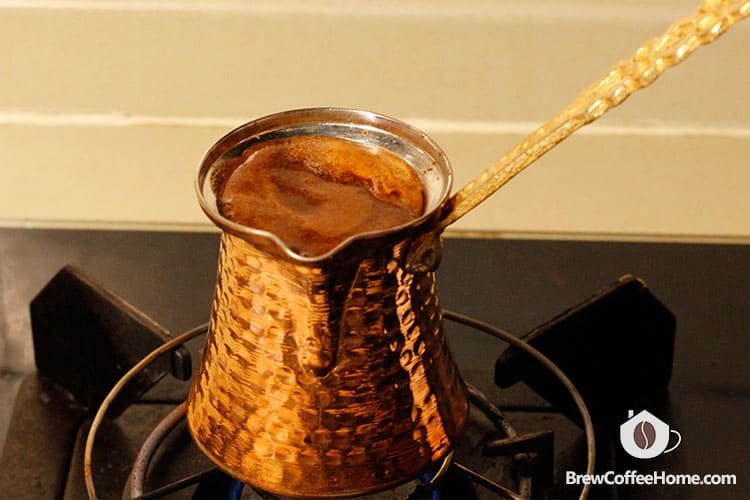 What is the most organized way to make Turkish coffee for more than one person with various sugar preferences?

Because we don’t put sugar in Turkish coffee after brewing, we need to add it before we begin. If you are brewing the coffee for multiple people with different sugar requests, there are a couple of options:
The first is to brew the coffee in separate pots. However, this will either require more than one ibrik or the necessity to make more than one brew.
The second option is to begin brewing the coffee without sugar and add the first pour to all the cups before adding the sugar for the second pour.

Where can I purchase Turkish coffee cups?

If you visit Turkey or one of its neighbors, it is easy to find Turkish coffee cups. However, if you can’t do this, there are plenty of options on Amazon. More often than not, a Turkish coffee cup has a capacity of 2 fluid ounces, so espresso cups are acceptable too. Just ensure you don’t measure the water with an 8oz mug.

What is Turkish coffee fortune-telling?

Once you have finished your drink in Turkish tradition, you turn the cup upside down and allow it to cool. Then, someone you’re with will “read the cup.” This ritual is an enjoyable tradition where whoever is reading the cup (and is good at inventing stories) will observe the cup and predict your future due to the formation of the coffee residue that will be on the cup’s sides. If you believe in fortune-telling, this can be enjoyable and interesting.

Why is water served alongside Turkish coffee?

Turkish coffee is always served alongside a glass of cold water. The water is to help you prepare your palate for the strong, rich coffee. In keeping with tradition, you first drink the water, then the coffee, to receive the maximum aroma.

Turkish coffee is renowned for its very strong smell, so traditionally, it is not made using milk. However, if you are not that concerned with brewing the most authentic Turkish coffee, you are free to add anything you like to it to make it more palatable, including milk.

Is Turkish coffee stronger than espresso?

Both espresso and Turkish coffee have stronger tastes and caffeine levels than standard coffee. Because Turkish coffee is unfiltered, it has a more robust taste than espresso. This lack of filtration also leads to higher caffeine content. Also worth noting is that the foam that’s so critical to Turkish coffee is different from the crema you associate with espresso.

Because Turkish coffee is unfiltered, does that mean I will drink the grounds?

You will likely consume some of the grounds while drinking Turkish coffee. If you would prefer not to, let it sit for a few minutes once it is served to you to allow the coffee grounds to settle at the bottom of the cup. Also, don’t stir when the brewing process is done, and make sure you consume it slowly. After your drink is finished, you will see the coffee grounds at the bottom of the cup.