October 1, 2021October 1, 2021 // Chris Clark
Last Updated: October 1, 2021
We review and suggest products independently, but if you buy a product via the links in our posts, we may earn an affiliate commission at no cost to you. 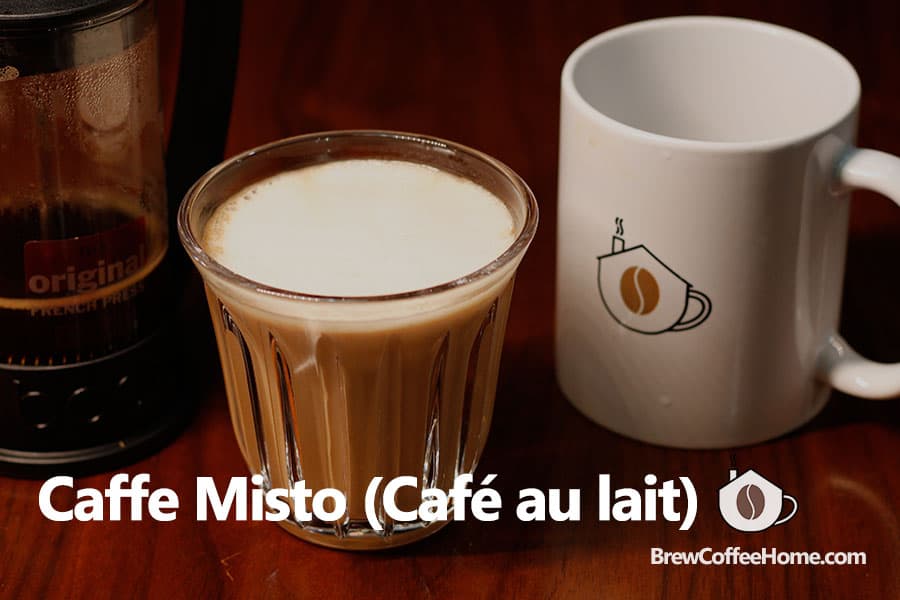 Imagine you’re at your local independent coffee shop or Starbucks craving a milk-based hot coffee, but you’re predictably spoiled for choice. You peruse the menu, and all the usual suspects are present – latte, cappuccino, flat white, and macchiato, among others. Then you see a name you’re unfamiliar with – Caffè Misto.

But what exactly is Caffe Misto? It’s a drink made with coffee and milk and looks a lot like a latte. So, how do the two drinks differ from each other? Also, can you brew Caffe Misto at home?

This guide will answer those questions meaning that the next time you visit a coffee shop with your friends, you can show off your knowledge about this previously unfamiliar drink. Plus, you’ll also know how to brew it yourself! 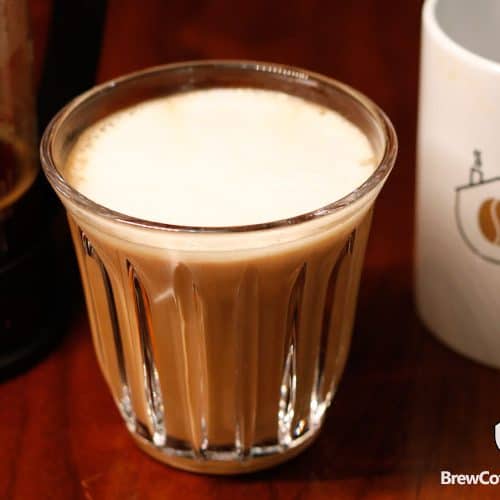 Perhaps “coffee with milk” neither sounds sophisticated enough on the menu nor is descriptive enough to properly differentiate between it and other milk-based coffee drinks. Therefore, many shops call the drink Caffe Misto. However, it really is no more than regular brewed coffee combined with hot milk in a 1:1 ratio.

The recipe sounds incredibly simple, but that doesn’t mean all Caffe Misto is the same. Indeed, the one you order at Starbucks may differ significantly from a Caffe Misto that you buy in another coffee shop. For example, the bean roast, how you heat the milk, and how you brew the coffee all affect the overall flavor.

However, one thing is certain – this is a drink you can make at home, regardless of exactly how you choose to do so.

How To Make Caffe Misto At Home

Many of the drinks you’ll find at the local coffee shop require a decent espresso machine to make well at home. However, one significant advantage of Caffe Misto is that you don’t need any expensive equipment. Indeed, you can use whatever brewing method you please, including French press, pour-over, a drip coffee maker, or AeroPress.

While you’re brewing the coffee, heat your milk. Then, when both the coffee and the milk are prepared, pour equal amounts into a coffee cup for a delicious cup of Caffe Misto.

Let’s go into more detail with some step-by-step instructions.

Caffe Misto is a drink you can brew using your favorite coffee beans. However, medium to dark roasts work particularly well for pairing with your milk.

We recommend dark roast Colombian, Brazilian, or Sumatran coffee beans as they have earthy, nutty notes that pair beautifully with milk. Meanwhile, African beans, including Kenyan and Ethiopian, are light roasted with higher acidity, making them better suited to black coffee.

Although any brewing method is appropriate for Caffe Misto, the flavor will differ depending on your choice.

For example, pour-over makers use paper filters, so you can expect your Caffe Misto to be sediment-free, mellow tasting, and with a clean flavor if you use that method.

Meanwhile, using French press will give you a full-bodied coffee with a more robust flavor. However, one drawback is a few grounds may reach your cup.

Drip coffee makers are the simplest way to make Caffe Misto, as you can make freshly drip brewed coffee with little more than a touch of a button. If your drip maker has strength options, choose the strongest brew.

Whichever brewing method you use, keep in mind that because you’re using simply half brewed coffee and half milk in the cup, your Caffe Misto will taste weaker if you use the same brewing strength as you normally use. So, we suggest you use more coffee and less water while brewing. For example, if you normally use a 1:18 coffee to water ratio, try 1:13 instead.

You can make Caffe Misto with whatever milk you like, including whole milk, 2% milk, coconut milk, soy milk, almond milk, or oat milk. You’ll also have the option of choosing which milk you’d like when you’re ordering Caffe Misto at Starbucks.

If you buy Caffe Misto at a coffee shop, there’s a good chance it’ll have steamed milk. However, unlike a latte, milk foam isn’t a requirement – you just need heated milk, so there’s no need for an espresso machine with an accompanying steam wand or a milk frother.

As we mentioned earlier, a stovetop or microwave is all you need to prepare your milk. Meanwhile, because your freshly brewed coffee will be hot, your milk doesn’t need to be boiling. Warm milk will suffice.

So far, this article has detailed what Caffe Misto is and the best way to brew it. However, it can still be hard to ascertain how it differs from a latte. So, let’s look at those differences.

As we know, Caffe Misto combines equal parts of freshly brewed coffee and hot milk. In contrast, the latte consists of espresso and steamed milk with a light layer of foamed milk on top.

The main difference between the beverages is their ingredients. So, for Caffe Mistro, you use freshly brewed coffee, while latte uses espresso. While you make both brewed coffee and espresso with grounds, they are completely different beverages.

For example, espresso is an intense drink served in one to two-ounce cups, while we drink brewed coffee from larger cups. Meanwhile, brewed coffee tastes far milder than espresso.

There are the basic ingredients of these two popular coffee drinks, you can also add whipped cream, syrups, or whatever you like to make the coffee drink you like.

To brew an espresso-based drink like a latte, you’ll need an expensive espresso machine with a steam wand. First, you grind the coffee beans into fine grounds, then tamp them in a portafilter and rapidly extract the coffee using around nine bars of pressure. Then, you use the steam wand to froth the milk. Each of these steps needs some experience.

By contrast, Caffe Misto is far more straightforward to brew at home. You just need to know how to make fresh brewed coffee. It also doesn’t require expensive equipment – an inexpensive coffee maker such as a French press, pour-over dripper, drip coffee machine, or AeroPress is sufficient.

Latte requires frothed milk, which you’d ideally use a steaming wand to achieve. Steam wands often come with espresso machines, although you can use a cheaper milk frother to get air bubbles into your milk, too. Meanwhile, Caffe Misto only needs hot milk – you can froth the milk if you like, but it’s not a requirement.

Here comes another question, you can order an iced latte at Starbucks and many places. Is there a coffee drink called iced Caffe Misto? Although hot milk is mentioned in the definition of a Caffe Misto, you can definitely add cold milk to equal parts brewed coffee or cold brew to make yourself an iced Café au lait.

The caffeine level in both latte and Caffe Misto depends on the amount of coffee and the type of beans you use.

There are many variables. However, in general, if your latte has a double shot of espresso, there will be around 150mg of caffeine. Meanwhile, if you make 8oz of Caffe Misto, you’ll have between 70 and 140mg depending on the brewing method and beans you use.

For more details, here is a chart about how much caffeine and how many calories are in Starbucks Latte and Caffe Misto.

As this article has shown, while the appearance of Caffe Misto on a coffee shop menu might confuse even the most enthusiastic coffee drinkers, it is just coffee that uses very straightforward ingredients and needs very little equipment.

Despite this, though, don’t make the mistake of assuming Caffe Misto isn’t a high-quality drink. In reality, it offers a beautiful and satisfying alternative to the usual range of milk-based coffee drinks on offer, including cappuccino, latte, flat white, and macchiato.

Not only that, but there’s no set rule as to which type of beans, roast level, or brewing method you use. Meanwhile, you can use any milk you want. Therefore, not only is it simple (and inexpensive) to make at home, but you can easily tweak the recipe to enjoy lots of subtle variations in flavor.

So, next time you’re in your local coffee shop and see Caffe Misto on the menu, there’s no need to decide against ordering it because you don’t know how it’s made or what’s in it.

Better still, if you’re ever at a loss as to which coffee to brew at home, you now have a straightforward and delicious addition to consider that you can either enjoy on your own or impress friends and family with!