Keurig Mini Vs Mini Plus – Side By Side Comparison

November 4, 2021November 4, 2021 // Chris Clark
Last Updated: November 4, 2021
We review and suggest products independently, but if you buy a product via the links in our posts, we may earn an affiliate commission at no cost to you. 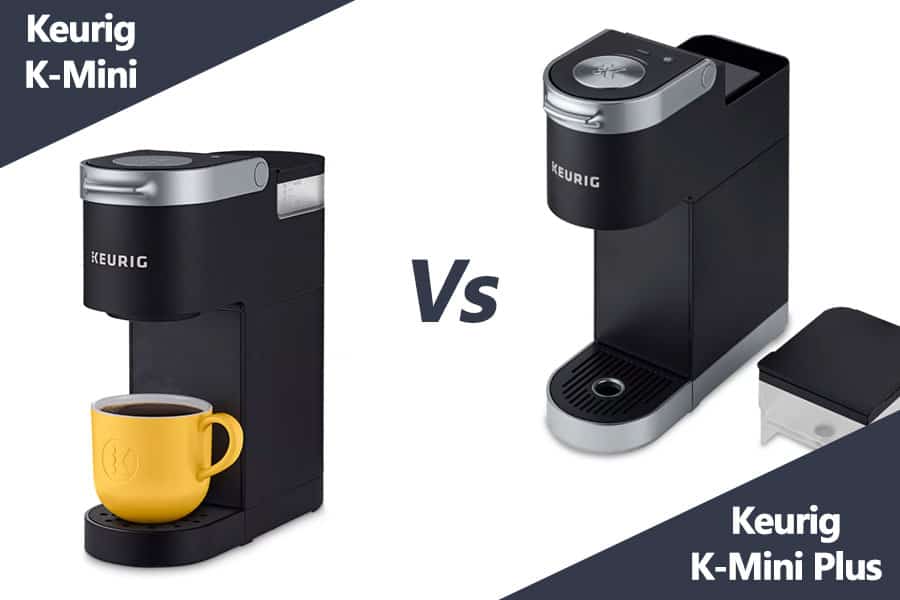 Keurig K-Mini and K-Mini Plus are aimed squarely at those with limited countertop space.

At first, it isn’t easy to see much difference between the two Keurig coffee machines, which is where this article comes in. We’ll examine in detail what separates one from the other to help you decide which is the best coffee maker for your needs. We’ll also offer a brief comparison between the K-Mini Plus and another Keurig in the same price category, the K-Slim. Let’s get started.

Keurig Mini Vs Mini Plus – The Major Differences

The primary differences between Keurig K-mini and K-Mini Plus are found in the following areas: 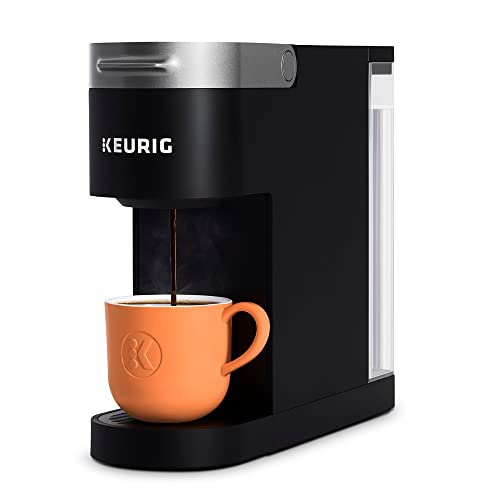 Last update on 2022-12-07 / As an Amazon Associate, if you buy via the links, Brewcoffeehome earns a commission at no extra cost to you.

The Keurig K-Mini’s water tank is attached to the body (in other words, you can’t remove it). However, the Mini Plus’s tank is removable, which makes cleaning the coffee maker far easier. This can also improve the brew quality because you can easily rinse it to remove bacteria, thus ensuring the cleanest water for brewing. In contrast, it’s trickier to clean the K-Mini properly.

The top of the Keurig K-Mini Plus has a “Strong” button. However, this is absent on the K-Mini. It may seem a small difference, but this is pivotal to the brew quality.

When you press the brew button on either coffee machine, the water pumps from the water reservoir through the heating elements. Then, finally, it reaches the coffee grounds via the needle. 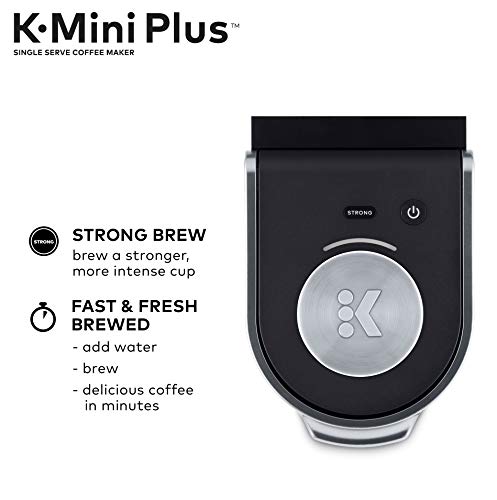 The two machines have some less significant differences, which we touch on. However, they are similar in several ways, too. Let’s examine those in detail.

What Do The Keurig Mini And Mini Plus Have In Common?

The two coffee machines are the same size. Each coffee machine stands 16.8in tall when the lid is open, 4.5in wide, and 11.3in deep. Meanwhile, there’s a 6in gap between the drip tray and the coffee spout, which is ample for most coffee cups. However, if you want to brew the coffee into travel mugs when you’re on the move, you can take out their drip trays, offering an extra inch of clearance. 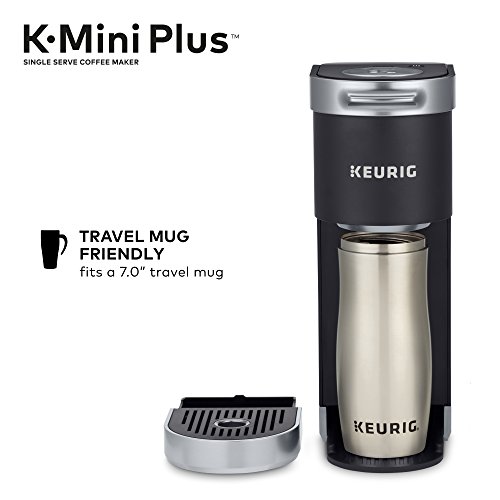 As the dimensions above reveal, the machines are incredibly compact, while they each weigh just 4.6lbs, too. Therefore, they’re ideal for even the smallest countertop space. You can enjoy delicious coffee in your office or even in an RV. Also, the machines each have a 24in the cord, which fits snugly in the cord storage at the back.

The Keurig K-Mini and K-Mini Plus designs are minimalist, with a large, circular brew button at the top. The latter also has the “Strong Brew” button we mentioned earlier. Overall, each coffee machine is aesthetically pleasing and cute, meaning they’re unlikely to appear incongruous in most smaller kitchens.

Design: K-Mini vs K-Mini Plus

The two machines may look similar, but the K-Mini Plus is the more robust of the two. For example, the removable drip tray has a chrome accent, whereas the K-Mini is completely plastic.

The machines are each available in six colors. However, they have different tone options. So, the K-Mini’s poppy red is more vibrant than the K-Mini Plus’s calmer cardinal red. The K-Mini is also available in pink, while you can only get the K-Mini Plus in beautiful evening teal. Therefore, if you’re not too concerned about other differences, your choice of which coffee maker to buy may come down to aesthetics.

The coffee machines have identical brew units with a needle that pierces the K-Cup and injects water into the grounds. As well as coffee options, you can also brew tea, hot cocoa, and other gorgeous beverages. There are many K-Cup varieties, so whichever drink you want, you can probably find it.

This range of drinks options is one of the main reasons that Keurig machines are second only to drip coffee makers in popularity in the US.

Last update on 2022-12-02 / As an Amazon Associate, if you buy via the links, Brewcoffeehome earns a commission at no extra cost to you.

To add to the machines’ versatility, both are compatible with the My K-Cup universal reusable filter, so you can use your own beans rather than rely solely on the availability of K-Cups.

The two machines perform identically for regular brewing, meaning you can expect the same coffee using the same K-Cup pods. However, as we mentioned earlier, the “Strong Brew” function of the K-Mini Plus offers a slower flow rate for a higher extraction, giving it the edge over the K-Mini if you prefer a more robust drink.

The water reservoirs of both machines are the same size, offering a minimum of 6oz and a maximum of 12oz. There are water level marks on the side to determine the volumes, making filling the water tank straightforward.

To brew your coffee, you need to pour water into the tank anywhere between the two levels, and then the machine will brew the coffee with whatever volume of water you’ve added. Of course, this means the water tank will need refilling with each brew. This is one of the main differences between these smaller machines and other Keurig machines with a multi-cup water reservoir.

Both machines brew coffee identically and have the same water reservoir capacity. The main difference is that the K-Mini Plus has a removable water tank, making it easier to refill and clean.

Pod Storage Feature – Only Available In The K-Mini Plus

The K-Mini Plus has a pod storage container, which the K-Mini lacks. The container holds nine K-Cup pods, while you can slide it out while brewing and slide it back in when you’re finished. This fantastic space-saving accessory makes the K-Mini Plus an even more attractive option for those with limited countertop space, as you have somewhere to store your K-Cups, reducing potential clutter.

Both the Keurig Mini and Mini Plus are entry-level Keurig machines. As such, they are relatively inexpensive. The K-Mini was Keurig’s most affordable coffee maker before it released the K-Express Essentials. That machine has a 36oz removable water tank and a refined design. You can read our comprehensive K-Express review here.

The K-Mini Plus is more expensive than the Mini. You have a removable water tank, strong brew function, and an extra pod storage container. You need to decide whether you want to pay more for those extra features.

Keurig K-Slim vs K-Mini Plus

The K-Slim has three cup sizes – 8, 10, and 12oz. Meanwhile, the K-Mini Plus brews between six and 12oz of coffee, determined by how much water you pour in the tank. This affects the overall flavor because the K-Slim cannot brew less than 8oz and doesn’t have the “Strong Brew” function. Meanwhile, the brewing time is even shorter than the K-Mini, and each of these factors leads to a weaker drink.

Note: On Keurig’s official website, we noticed they released a new K-Slim with their latest MultiStream Technology. It has 5 needles instead of one in the previous version for better and even extraction. We haven’t tried that yet, however, according to our review of the latest K-Supreme series, this change will make a difference.

Both machines are compact but, confusingly, the K-Mini Plus is slimmer than the K-Slim! This is because the K-Slim has a larger water tank, which gives it more depth.

The K-Slim also doesn’t have the pod storage container and is only available in black. This contrasts with the K-Mini Plus, which is available in six colors and has a container.

Overall, we prefer the K-Mini Plus, as it offers better value for money and brews better-quality coffee. However, if you prefer a larger water reservoir, the K-Slim may still be the best option for you.

Our Final Verdict – Keurig K-Mini Vs K-Mini Plus

If you’re comfortable investing a few extra bucks, the K-Mini Plus is clearly the better of the two machines. The “Strong Brew” function makes all the difference for coffee enthusiasts who enjoy a strong drink. Meanwhile, the removable water reservoir cuts out a lot of hassle while cleaning the coffee maker. Finally, the K-Mini Plus’s pod container is a welcome addition, too.

More and more coffee lovers like to prepare their daily coffee with a K-cup single-serve coffee maker for convenience. Indeed, it would be hard to find an alternative to either the K-Mini or K-Plus that is so affordable and compact and makes freshly brewed coffee in a minute at the touch of a button.

Keurig has many coffee machines to suit any budget, and while it’s always great to have a choice, many Keurig models are quite similar, with features that can be confusing.

We hope that this buying guide has offered clarity on two coffee makers that seem strikingly similar at first glance so that you can make an informed decision on which is the best for you.