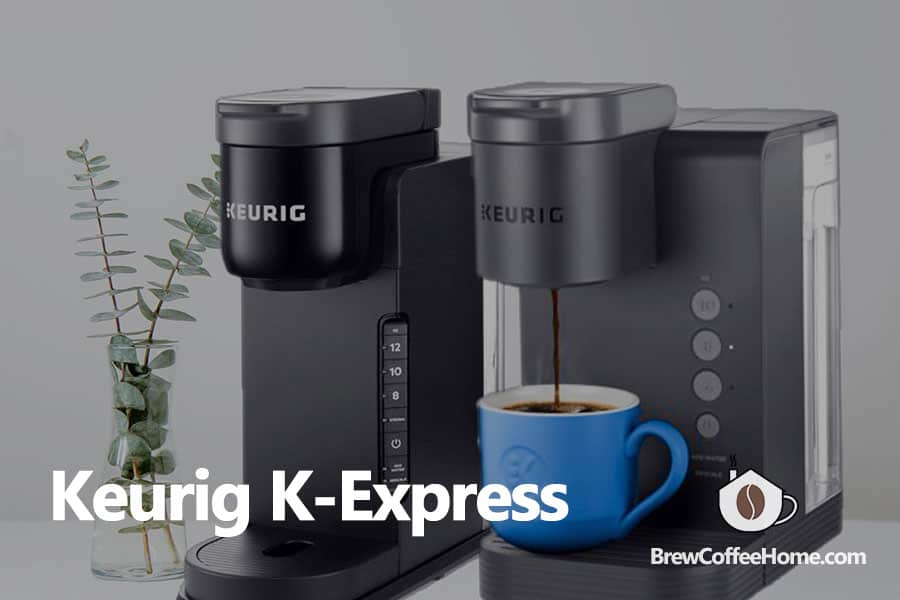 If you’re hoping for fresh brewed coffee that’s quick to make and hassle-free, you won’t need to look much further than a Keurig single-serve coffee maker.

Keurig is one of the most popular coffee brands, so it’s no surprise that its product line is always expanding to meet demand and offer customers an array of choices in every price category. Indeed, in 2021 alone, the company has released two products, the Keurig K-Express and K-Express Essentials.

This article will examine how the two models differ and reveal whether the products are superior to the older models, such as the popular K-Mini.

In short, there’s not a huge difference between these two models. However, the K-Express is the most recent release of the two. We’ll focus on that machine and highlight the differences between it and the K-Express Essentials. 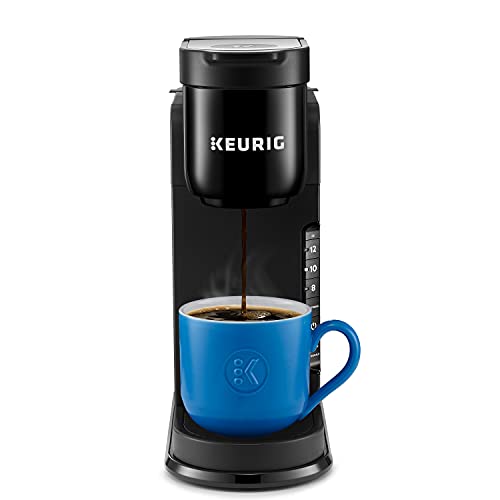 Last update on 2021-12-01 / As an Amazon Associate, if you buy via the links, Brewcoffeehome earns a commission at no extra cost to you.

The K-Express is a slim, compact coffe maker, which is in keeping with most of Keurig’s other machines (Check our top-picked Keurigs). Indeed, the overall design bears similarities with established models, including the K-Slim and K-Mini. However, there are a few differences, which are worth considering before you decide which coffee maker to buy.

The K-Express targets entry-level buyers, so it’s among the most affordable Keurig coffee machines. Because of this, the build quality is not as high-end as premium Keurig machines. Indeed, the K-Express is plastic. However, the exterior of the machine has a sleek finish, giving this modern coffee maker a pleasingly contemporary appeal.

The machine has a relatively small removable drip tray. When you remove the drip tray, there is a clearance of 7.25in beneath the spout, which is ample for thermal travel mugs.

On the right edge of the coffee maker is a row of buttons with indicator lights. Each button has a number (8, 10, or 12fl oz), which indicates the cup size to brew. Press the button for whichever size you like, and the machine will get to work. Meanwhile, if it’s time to add more water, or if the machine needs descaling after 250 brews, an indicator light will alert you, which is a useful and convenient feature.

The most obvious differences between the two Keurig machines are their design and appearance. For example, the K-Express Essentials is wider, while the two machines have slightly different layouts. Also, the Essentials has a matt finish, while the K-Express is shiny. Meanwhile, on the K-Express, the buttons and indicator light are at the front of the machine towards the right-hand side, rather than on the edge.

Finally, the K-Express is only available in black, while you can purchase the K-Express Essentials in red, black, or tropical blue – something to consider if you place importance on color coordination with either your kitchen Décor or other kitchen appliances.

Whichever machine you choose, the numbers are marked clearly on the buttons to avoid any confusion.

If you like a more robust coffee, the “Strong Brew” option should pique your interest. Many people are put off by Keurig machines because there are complaints that the K-Cup pod coffee tends to produce weak and watery coffee. However, the company has tackled this issue by including the “Strong Brew” feature in many of its models. This extends the brewing time for a better extraction.

On the K-Express, the “Strong Brew” button is positioned beneath the brew sizes. So, if you activate it before choosing the cup size, it’ll brew a noticeably stronger coffee.

Unfortunately, the K-Express Essentials machine doesn’t have the “Strong Brew” option, and while it brews coffee within a minute, it is weaker and milder than the coffee the K-Express can brew.

So, if you don’t mind weaker coffee, the K-Express Essentials is a good choice. However, if you want a stronger coffee using the K-Express essentials, you can use the reusable K-Cup, which allows you to brew your own ground coffee rather than rely on the pre-loaded grounds of a standard K-Cup. Or you can simply brew a 6 oz coffee, which will also taste stronger.

Both machines have a removable water reservoir at the back. The water reservoir on the K-Express holds a generous 42oz, while the K-Essentials equivalent holds just 36oz. This is a surprise considering the K-Express is the smaller of the two machines, and it’s something to consider if the prospect of refilling your machine between brews is an issue for you. 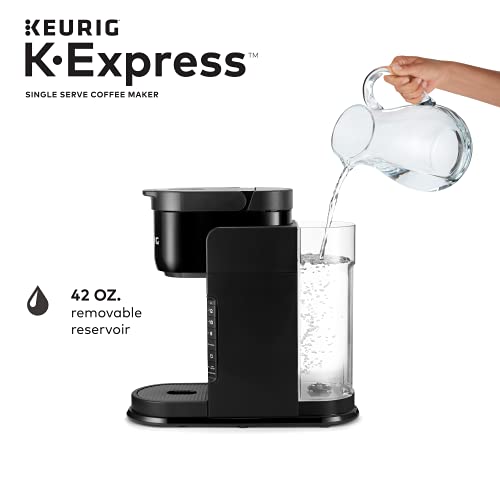 The K-Express is no different from many other Keurig coffee makers in that a needle pierces the lid of the single-serve K-cup pod, fills it with water, and extracts the flavor from the grounds. If you’re brewing an 8oz cup of coffee, it takes around 7 seconds to see the first coffee emerge from the spout. Then, approximately 50 seconds after that, the coffee is ready, which is extremely rapid. If you have only a few minutes for your daily coffee routine, this coffee machine will fit you.

The brewed coffee is around 195°F (90°C) when it leaves the spout, reducing to around 168°F (75°C) in your cup, which is really hot. You can also immediately brew a second cup after the other without waiting for the machine to reheat because the heating element works well – another convenient factor that removes much of the hassle and time to brew coffee.

Both the machines are new models. However, neither has the latest Keurig MultiStream Technology. How can you tell? Well, if you open the lid, you’ll see one needle rather than five that higher-end models, including the K-Supreme Series and the new K-Slim have. Nevertheless, the brewed coffee is still consistent and tasty, so, considering the price, it shouldn’t present too much of an issue.

Both machines have identical internal designs. Even the sound the two machines make is the same, which is a sure sign that the internal mechanisms are identical. Of course, this also means that the quality of the brewed coffee is the same with each machine.

The difference? The “Strong Brew” option of the K-Express. When you activate it, it will lead to a 10-20 second longer brewing time. However, you’ll benefit from a more robust coffee.

Both the K-Express machines are energy-saving thanks to their auto-off function. This means that if they sit idle for over five minutes from the last brew, they will switch off. Not only does this make each somewhat eco-friendly, but it also offers you peace of mind if you forget to turn your coffee maker off manually after using it.

You can also purchase a My K-Cup universal reusable coffee filter so you can use your own favorite ground coffee.

The Keurig K-Express offers excellent value for money and has a truly attractive price. It costs the same amount as the Keurig K-Mini. However, the K-Express offers more thanks to the “Strong Brew” strength enhancer and a multiple cup water reservoir large enough not to need refilling every time you use it. However, despite these extremely useful additions, it’s only slightly larger than the K-Mini. This means that if you have a limited countertop space, it’s still suitable. Overall, it’s one of the best value-for-money Keurig machines on the market.

Meanwhile, the Keurig K-Express Essentials is even cheaper than the K-Express, making it the most affordable coffee maker in Keurig’s lineup. It is slightly larger than the K-Express. However, if you have the countertop space for it, can manage without the “Strong Brew” function, and don’t mind the fact it has a smaller water reservoir, it’s worth considering.

At present, the K-Express Essentials single-serve coffee maker is available exclusively at Walmart. Meanwhile, you can purchase the K-Express either via Keurig’s official website or on Amazon.

The Keurig K-Express and K-Essentials are great options if you want a single-serve coffee maker for a hassle-free caffeine hit but have a limited budget. Similarly, suppose you’re new to single-serve brewing. In that case, both machines offer an excellent introduction to Keurig machines, as they offer the same brewing options and functionality as the company’s more expensive models. Also, there are many K-Cup options, from standard black coffee to hot cocoa or tea.

Of course, one of the primary reasons coffee lovers opt for single-serve coffee machines is their ease of use, and the K-Express and K-Express Essentials are no exception. Simply place the K-Cup of your choice into the Keurig machine, and select the cup size you require. Then, after around a minute, you will have a cup of delicious freshly brewed coffee.

Furthermore, neither machine is difficult to maintain, and you’ll only need to descale them every 250 brews.

Finally, both the K-Express and K-Express Essentials are inexpensive, meaning that even if you’re on a limited budget, you can experience genuine Keurig quality and enjoy a delicious cup of coffee every day.