July 6, 2022July 6, 2022 // Chris Clark
Last Updated: July 6, 2022
We review and suggest products independently, but if you buy a product via the links in our posts, we may earn an affiliate commission at no cost to you. 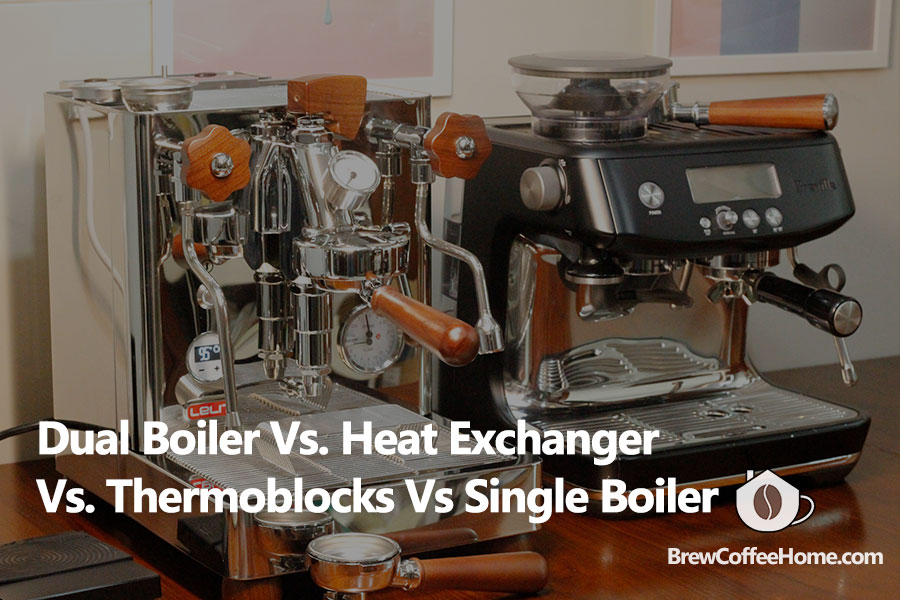 Boilers are essential components of any espresso machine. After all, it’s the part of the machine that heats water for brewing coffee and steaming milk.

Thermoblock or single boiler machines are ideal for domestic brewing and are the most inexpensive. However, if you want to move your brewing up to another level by simultaneously pulling an espresso shot and steaming milk, heat exchange machines or dual boiler machines are your best options.

But how do the different types of boilers you find in an espresso machine differ from one another? This article will answer that question.

Thermoblock boilers are usually found in either an inexpensive entry-level espresso machine or a super-automatic espresso machine. Thermoblocks essentially consist of a block of aluminum with many narrow pipes inside. As water goes into the Thermoblock and begins swirling through the pipes, the heating elements rapidly heat the water to the correct temperature.

In the past, thermal blocks weren’t the best option because they had substandard temperature stability and steaming ability. Nowadays, they’re much improved and stabilize the water temperature well.

Higher-end machines, like the Ascaso Steel Duo, even have two Thermoblock heating elements that let you brew and steam simultaneously.

Thermocoil is similar to Thermoblock in efficiency and the way it works, but it presents less leakage risk. As a result, though, it costs more.

Two of the biggest advantages of Thermoblock are its compact size and ability to heat water on demand. This means that espresso machines with Thermoblocks take only seconds to heat water. Because they’re small, they often ensure the espresso machine is cheaper and has a smaller footprint. You also don’t need to worry about the boiler emptying and refilling, meaning you’ll have access to unlimited hot water and steam with better energy efficiency.

Espresso machines that use Thermoblocks include the Breville Barista Express or Pro, De’Longhi machines, and a range of entry-level espresso machines.

Who Is The Thermoblock Machine Suitable For?

Espresso machines equipped with Thermoblocks are a good option for anyone beginning in espresso-making who doesn’t want to invest too much. Also, as we mentioned earlier, they heat water quickly, with some models reaching their ideal temperature in a matter of seconds. That makes them excellent for anyone on a tight schedule who wants to make espresso fast, without a long preheating time.

As the name suggests, these machines have one boiler. As a result, they are more compact and cheaper than the more complex heat exchanger or dual boiler machines. This is also the most common type of domestic espresso machine boiler, and popular machines that use them are the Gaggia Classic Pro and Rancilio Silvia.

One of the great things about the boiler is it can store a higher volume of water for either brewing or steaming. The heating elements inside the boiler heat the water to the ideal temperature.

Most single boiler machines control the temperature with a mechanical thermostat. This leads to the water reaching a certain pressure related to the temperature, and the thermostat kicks the heating element off. This causes the pressure to drop, at which point the element comes back on.

Unsurprisingly, this leads to an oscillation of the temperature. To offset this, some manufacturers add PID for more consistent temperature control, which adds to the cost.

Using a single boiler means you can’t brew and steam simultaneously because different temperatures are needed. As a result, you’ll have to steam some milk first, then do some cooling flush or wait until the water cools to the brewing temperature. Another option is to pull an espresso shot first, then wait for the water to attain the steaming temperature.

Single boiler machines have better temperature stability than those with Thermoblocks. They also generate more powerful steam pressure. Thanks to the consistent brew temperature and steam pressure, you can pull higher-quality espresso shots.

The most significant drawback is you can’t steam and brew simultaneously, so you’ll have to do some “temperature surfing” after steaming to get the ideal brew temperature.

Many mid-range espresso machines have a single boiler and a Thermoblock, the former for brewing water to the most consistent temperature and the latter for steaming milk for efficiency. Also, there’s no waiting time between shot and steam.

Who Is The Single Boiler Machine Suitable For?

Espresso machines with single boilers are usually entry-level. They are ideal for anyone who prefers Americano and espresso but only occasionally uses milk for specialty coffee as they can’t brew and steam simultaneously.

Heat exchangers (or HX espresso machines) are most commonly found in prosumer of higher-end consumer-grade machines. However, they’re also often found in commercial settings. One main reason is that the boiler allows for simultaneous coffee making and steaming.

Heat exchanger machines have one boiler for steaming, and it’s far larger than the single boiler outlined earlier. A pipe-like isolated chamber is inside the boiler that retains the optimal temperature. That’s because the diameter and distance of the heat exchanger are precisely measured to ensure a certain temperature.

Around the heat exchange boiler is filled with water and heated. Either pressure stat or PID controls it. As we’ve already stated, PID ensures a more precise temperature control. When the water reaches the steaming temperature, steam appears in the top 1/4, ensuring it is ready for frothing milk. Meanwhile, in the tube, the cooler brew water is ready simultaneously.

It’s worth keeping in mind that once you activate the pump, you can begin pulling your espresso if you’re using an E61 group head. In the meantime, the water in the boiler remains at the ideal temperature for steaming. Therefore, when you turn the steaming dial, you will get steam that is not only instant but powerful – ideal for frothing milk for espresso-based beverages like cappuccino and latte.

Heat exchanger machines are usually more compact than dual boiler alternatives because there is only one boiler. Meanwhile, the machines are not as expensive. Even so, you can brew and steam milk simultaneously, and there’s no reason why you can’t get beautiful espresso.

Who Is A Heat Exchange Machine Suitable For?

The dual boiler espresso machines have a separate brew boiler and steam boiler, and you’ll have full control of the temperature of each. You can raise or lower the brew temp as desired, and it won’t affect the steam temperature as it’s a separate entity.

Double boiler machines are best for espresso aficionados who want full control over their coffee and steam. You can dial in the temperature for the best possible results, which can significantly impact the finished espresso. If you want a higher temperature using light roast beans and a lower temperature for dark roast, you’ll have those options. Heat exchanger machines also have some flexibility, but not to the same degree.

Each boiler has a large capacity, too, so you can make bigger batches of drinks, which is why they’re often used in commercial settings. However, they usually cost more than heat exchangers.

A premium-quality prosumer machine will usually have a PID for each boiler and a more durable and consistent rotary pump than a vibration pump. If you are unsure what the difference between rotary pumps and vibration pumps is, we looked at each in another article. In addition, some heat exchanger machines also have rotary pumps, although most have vibration pumps.

Who Is The Dual Boiler Machine Suitable For?

When buying an espresso machine, there are several aspects to consider, including size, functionality, cost, design and build quality, and the pump. However, as this article has demonstrated, the type of boiler an espresso machine uses is also a consideration based on factors like your budget, countertop space, time preference, and even the type of espresso drinks you enjoy.

We hope this article has helped add clarity so that when you look for an espresso machine, you’ll now have a better idea of exactly which boiler is the best for you.