How Many Types of Coffee Beans and Their Characteristics

October 3, 2022October 3, 2022 // Chris Clark
Last Updated: October 3, 2022
We review and suggest products independently, but if you buy a product via the links in our posts, we may earn an affiliate commission at no cost to you. 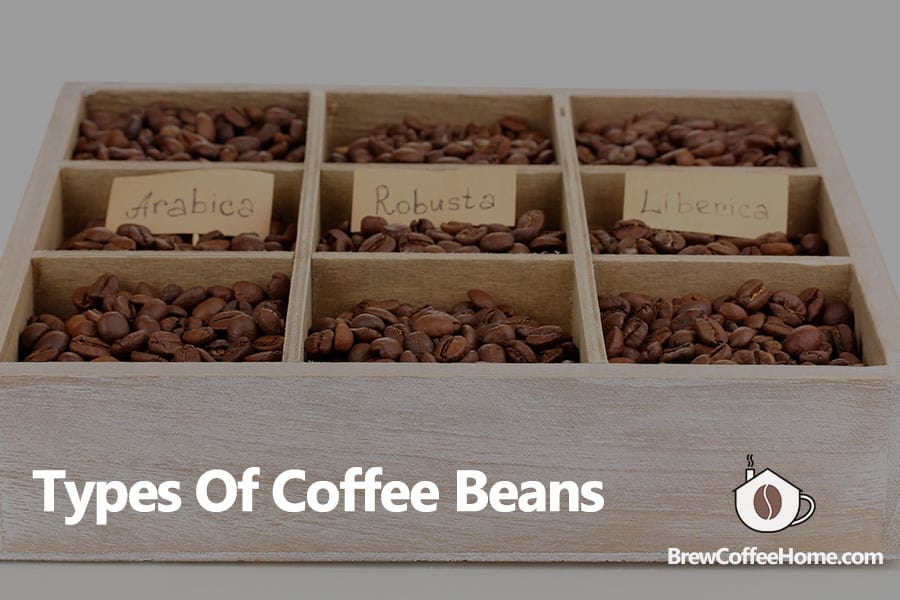 If you’re a coffee connoisseur or are relatively new to drinking coffee, you may have thought about the vast varieties of coffee bean types on the market.

Coffee beans come in many shapes, plant types, and flavor profiles. You’ve likely seen coffee brands advertising their variety, arabica or robusta, and the distinct flavor notes you’ll encounter when you drink it, from woody to flowery to fruity. But, how wide varieties are there? And which are the most popular? Let’s dive into the long history of coffee and which varieties are most popular today.

About Coffee Species and Varieties

There are over 120 species of the Coffea genus, including the immensely popular arabica. Of the wide varieties, like liberica, canephora, excelsa, arabica, and robusta, these two make up the vast majority of global coffee production and consumption.

Coffea is a flowering plant that varies according to species in its environmental needs, the time it takes to ripen, the taste, and much more. For each species, there are dozens of varieties. The arabica coffee plant, which produces the most popular coffee beans in the world, includes varieties like Bourbon, Typica, and many more.

Coffee was first discovered in the 9th century in Ethiopia. By the 15th century, coffee beans had spread to the Arabian Peninsula, where trade and cultivation truly began. There are over 120 species of the Coffea genus grown in countries around the world. By the 17th century, it had made its way to Europe, where it received mixed reactions.

66% of Americans drink coffee daily, more than any other beverage, including water. Worldwide, around 2 billion cups of coffee are consumed every day.

While there may be over 100 varieties of coffee beans, only two of these, arabica and robusta, make up nearly 99% of the world’s marketplace. The remaining percentage goes to liberica coffee beans and a few others.

There are four main types of coffee beans on the market. Two of these, arabica and robusta, make up 57% and 43%, respectively, of all coffee bean consumption. Leaving only a minuscule percentage for the unique liberica and excelsa coffee plants. Each plant has a particular flavor profile and requires different environmental considerations to prosper.

If you’ve heard of a coffee bean, it’s like an arabica bean. They are the most popular coffee bean and are included in around 56% of the world’s coffee production. They’re also thought to be the first coffee beans ever consumed. It is endemic to the Ethiopian highlands but is now rarely found there. It’s grown in dozens of countries worldwide, including Latin America, China, India, and Southeast Asia.

These Arabica plants are more challenging to grow than the other three varieties on this list, taking around seven years to fully mature, and are, therefore, more expensive. They grow better at higher altitudes, approximately 2,000 feet, and can tolerate low temperatures but are susceptible to disease. They need rich soil, shade, and sun in specific amounts to thrive.

The coffee produced from these beans is sweeter with a more nuanced flavor profile. It’s less bitter than robusta coffee beans but only contains ½ the caffeine. It’s well-loved for its smooth texture and many different flavors. Most specialty grade coffee offered in artisan coffee shops is arabica.

It’s not uncommon to find brands advertising their pure arabica beans. But, no single arabica plant is like the next. Several varieties range from earthy to fruity notes. Typica and bourbon are two of the most popular. The typica was the first variety of species to be discovered and produced, and it is still enjoyed worldwide.

For more detailed information about this popular coffee species, check this out: What Is Arabica Coffee?

Another popular type of coffee bean is the robusta or coffea canephora. It’s second only to arabica, the most popular coffee bean variety on earth. It makes up around 43% of the world’s coffee consumption and is usually much cheaper than arabica.

These robusta coffee beans have lower acidity, are woodier, and are less fruity than arabica coffee beans. They are also notoriously bitter. You’re most likely to find robusta beans used in espresso, instant coffees, and as a filler in other varieties of ground coffee.

Coffee varieties that combine robusta and arabica are cheaper and usually less commonly enjoyed. But, some coffee-drinkers believe that a blend of the two beans deepens a coffee’s flavor profile and is a good thing. Those who enjoy this mixture cite the harsher, more bitter notes as appealing.

Robusta is considered to be more disease resistant than the more popular arabica. It can also endure high temperatures, up to 90 degrees F, and full sun. The plant also thrives at lower altitudes and is often less expensive. It’s lesser-popularity stems partly from the fact that it wasn’t discovered as a strain of coffee until nearly 100 years after arabica.

This coffee bean variety is also popular due to its high caffeine content, nearly two times more than arabica beans. It is less aromatic than arabica but has a fuller-bodied texture. It is primarily grown in Vietnam but is also found in India, Brazil, and Africa. You can easily find robusta used in Vietnamese iced coffee.

While arabica is more popular than robusta, many coffee lovers opt for the latter because it contains more caffeine, even if the flavor profile isn’t quite as exciting or traditionally good-tasting. Good quality robusta are often dark roasts that taste even stronger.

If you want to know more about the pros and cons of Robusta, read this: What Is Robusta Coffee?

Liberica, or coffea liberica, is a variety of coffee plants native to Africa. It is less popular than Robusta and arabica beans, making up only 1.5% of total coffee production. Liberica coffee bean is sometimes considered the rarest coffee on the market and is unlike any other coffee you can buy in a regular grocery store. Opinions are mixed on whether liberica beans should be more popular and widespread or are less interesting than arabica beans.

The plant was first introduced to a broader market in the late 1800s when a disease known as coffee rust decimated the world’s arabica stock. Farmers turned to liberica as an alternative, and, for a time, it rose in popularity. This trend all changed after a US-Philippine conflict resulted in the U.S. cutting off supplies from the Philippines. It took until 1995 for the beans to return to the world market, albeit in minimal numbers.

The beans’ flavor is woody, earthy, dark, smoky, and metallic. This variety of coffee is usually at least somewhat bitter but less so than the two main coffee bean types. The flavor usually comes as an aftertaste that is too overpowering to enjoy for some people. Liberica plants are hardier than the fickle but popular arabica variety, capable of being grown in hot climates. The plants also resist disease and pests in a way arabica does not.

These coffee plants are unique in that they grow to nearly 70 ft in height, the tallest of any other coffee plant. Their beans are also fairly large, growing to about the size of cherries, but contain less caffeine, around 1.23g for every 100g of beans. The plants thrive in light shade and well-drained soil, making them easier to cultivate than the more popular arabica variety.

The Liberica beans are more expensive than other varieties due to the lesser demand and supply. Today, the majority of liberica coffee plants are grown in Malaysia. This variety accounts for nearly 95% of all coffee grown in the country. It’s also grown in the countries of Indonesia and the Philippines.

Coffea excelsa was discovered in Africa in the 20th century as a strain of coffee beans. It is rarely used in the global coffee market and is primarily consumed in Africa and Asia. Excelsa is classified as a variety of liberica, and the two plants are often grown side by side without differentiating too much between them.

But, unlike the most commonly grown liberica beans, excelsa coffee beans are much smaller and rounder. The beans grow best at marginal altitudes, but the plants are difficult to care for, which only adds to the lack of excelsa products on the market. The excelsa plants can grow up to 50 feet tall with a large treetop diameter.

Excelsa is very productive, which can pose an issue to farmers who find it difficult to manage the plant’s height. It also has a longer ripening period. The excelsa beans are also low in caffeine, with around .8-1.13g of caffeine per 100g compared to the 1.2 to 1.5g per 100g  found in arabica coffee.

Some scientists have suggested that growing excelsa coffee beans may be an important way of reacting to climate change as their optimum altitude and temperature are lower than arabica.

Although there are 120 varieties worldwide, only four make up the coffee bean market. These four, arabica, robusta, liberica, and excelsa, are not consumed in equal measure.

The first, arabica, was also the first variety of coffee beans ever consumed. It is by far the most popular, even though it’s also one of the most difficult varieties to grow. The second, robusta, makes up the rest of the market, around 43%. The remaining coffee bean varieties make up the remaining 1% of all coffee consumed worldwide.

Different types of coffee beans have their own characteristics. If you can source them in your local coffee shops, it’s a great experience to sample them all.