What Is Ristretto? Ristretto vs Espresso And Long Shot (aka Lungo) 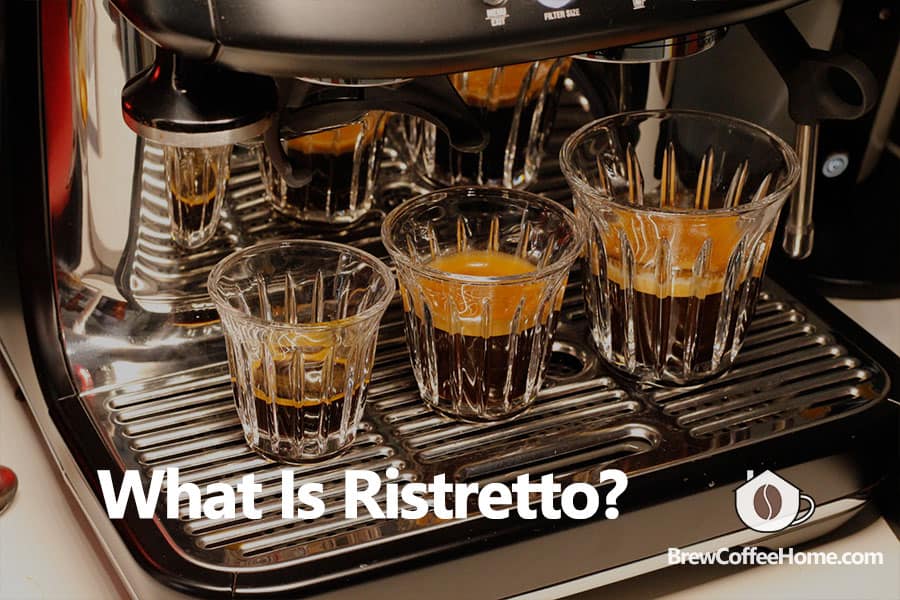 We all know that espresso is a very concentrated coffee, but ristretto even goes a step further.

You may have seen ristretto as an option on coffee shop menus, but what is a ristretto shot? Also, what does this coffee drink offer that a standard espresso can’t? This guide takes an in-depth look at the ristretto and gives you the details you need to make the perfect ristretto shot.

However, before we concentrate on ristretto, let’s look at the drink’s foundation, the espresso.

Contents show
1 What Is Espresso?
2 What Is Ristretto Shot?
3 About The Brew Ratio
4 How To Make Ristretto
4.1 Making Ristretto With Semi-Automatic Espresso Machines
4.2 Stop The Shot Early
4.3 Pull One Gram Of Liquid Per Second With A 1:1 Ratio
4.4 Use A Finer Grind For A Longer Extraction
4.4.1 Note:
4.5 Making Ristretto With Automatic Espresso Machines
5 Why Ristretto?
5.1 More Concentrated Flavor
5.2 Fewer Extractions
5.3 The Perfect Option For Certain Milk-Based Drinks
6 Ristretto vs Espresso
6.1 Ratio And Serving Size
6.2 Flavor
6.3 Caffeine Content
7 Ristretto vs Long Shot (Lungo)
8 Final Thoughts

Espresso is a brewing method that produces coffee using high pressure. An espresso machine generates at least nine bars of pressure to force the water through the finely ground coffee. This produces a very concentrated shot topped with a rich brown layer called crema. The beverage is named after the brewing method, the espresso.

Most coffee lovers find neat espresso too strong to enjoy. Because of this, water, milk, or other ingredients are usually added to the espresso to produce a range of espresso-based drinks. These include Americano, cappuccino, latte, and flat white.

Some people alter the extraction time and length of the drink for a more concentrated, shorter beverage, called ristretto.

What Is Ristretto Shot?

A ristretto is a shorter shot of espresso. So, it uses the same amount of coffee but with less liquid, which increases the concentration of the drink.

Ristretto is an Italian word, meaning “restrict.” So, you can see a ristretto as a restricted, more concentrated espresso shot. Plus, with a ristretto, you only get the first part of a full-length espresso shot.

About The Brew Ratio

For many years, baristas used volume to measure an espresso drink. So, a shot of espresso would be around 30ml. However, nowadays, coffee lovers use a more precise weight unit for measuring shots. As a result, you’ll regularly find baristas placing a scale under the cup before pulling a shot. For example, using a 1:2 coffee to water ratio means that for 36g of espresso, you’ll use 18g of coffee grounds.

Using precise measurements, it’s easy to experiment with brew ratios and create variations of espresso. Below are several ratios that you’d commonly use for different espresso drinks. The ratios are not strictly defined, but there is general agreement in the coffee world that they are optimal.

This sounds simple enough, but it’s harder to extract the coffee using less water. Therefore, you’ll need to iterate to find a sweet spot for the best sweetness and balance.

How To Make Ristretto

If you search for ways to make a ristretto online, you’ll find variations on making single or double ristretto shots, depending on the barista. Let’s examine some of the methods.

Here are the three most common methods. If you’re making double shots, use your preferred method to pull two shots.

This is the same process as pulling regular shot. In other words, each parameter of an espresso shot, including grind size, dosage, and tamping, is identical. You simply pull the shot at a 1:1 coffee to water ratio and stop it when you reach the required weight.

Also Read: How To Make Espresso At Home.

For example, you may use 18g of espresso grounds to yield 36ml of liquid for a double espresso shot in 24 seconds. However, to make the ristretto, you would stop the flow when it reaches 18ml for a short shot, regardless of the length of time it takes.

This is a straightforward way to pull a ristretto shot, but it risks under-extraction and a bitter, unpleasant flavor.

Pull One Gram Of Liquid Per Second With A 1:1 Ratio

This method aims to give a shorter extraction time, and ideally, you need to pull around 1 gram of coffee per second. So, if you’re using 18g of grounds, you’ll aim to pull 18 grams of coffee in 18 seconds. This is regarded as the traditional way of pulling a ristretto shot. However, you will need to alter the grind size to dial in and achieve the desired flow rate, so some patience and expertise are required.

Use A Finer Grind For A Longer Extraction

Many people think that a shorter extraction time causes under-extraction. However, this method uses a finer grind size than standard espresso grounds. This allows the espresso machine to pull a smaller volume of coffee in an extraction time for a standard shot of around 25 to 30 seconds, although doing this increases the possibility of over-extraction, creating a bitter and hollow flavor.

The methods outlined above are general guides for making ristretto. You can tweak them based on the coffee beans and roasts you’re using, your espresso machine, and your grinder. In our opinion, method two offers the best balance. However, we suggest experimenting with different methods.

Because espresso is already such a small, intense drink, it leaves some people wondering what the need is for an even more concentrated alternative. Nevertheless, there are some good reasons for choosing ristretto.

While espresso brews, you’ll notice the color of the shot change as it is pulled. It starts a rich dark brown before transitioning to tiger striping. The last part of the shot is pale blond. This final part is the thinnest part of the flow and the most diluted. In contrast, a ristretto shot doesn’t include the final, blond part, producing an even more robust shot than espresso.

Coffee extraction is a complex process. First, water dissolves the soluble compounds in the grounds, allowing you to enjoy the best possible coffee flavor. Then, the more water moves through the grounds, the more soluble elements will appear, leading to greater extraction.

Using more water increases the extraction but dilutes the strength of the coffee. This means that eventually, the coffee will begin to lose its texture and concentrated flavor.

Ristretto offers a chance to brew a coffee with a stronger taste, bolder flavor, and fuller mouthfeel than regular espresso shots.

Starbucks is one coffee outlet that’s increasingly using ristretto in its milk-based drinks. For example, its grande flat white uses three ristretto shots, amounting to 195g of caffeine. Flat white is a shorter drink than a latte, so a shorter ristretto guarantees bold flavors in the coffee. Meanwhile, Starbucks allows customers to choose ristretto instead of espresso for other drinks too.

Ristretto is made with the same Starbucks Espresso Roast used for full espresso shots, but less hot water is pushed through the grounds. The result is a smaller, more concentrated serving with a sweeter, richer flavor.

The primary difference between an espresso shot and a ristretto shot is the ratio and serving size.

Depending on how much coffee you use, a ristretto shot is around 15ml to 20ml (approximately 0.7fl oz) of liquid. Ristretto typically has a coffee to water ratio of between 1:1 and 1:1.5.

Finally, the correct way to serve both espresso and ristretto is in a small demitasse espresso cup.

Not surprisingly, espresso and ristretto share some similarities. One is their mouthfeels, which are both syrupy and concentrated. Meanwhile, each beverage has an intense flavor.

Different chemical compounds in ground coffee dissolve in hot water at different speeds. With ristretto, the number of bitter compounds that reach your cup is restricted thanks to the absence of the final, pale blond part of the shot. Because of this, it ought to be more intense and sweeter than espresso.

The extraction of a full-length espresso is easier to control than ristretto, leaving a familiar espresso flavor.

Because you can adjust the coffee to water ratio with espresso, you can significantly alter the flavor. So, if you use more water for long shots, it’ll produce lungo.

“Lungo” is the Italian word for “long.” As the name suggests, it’s at the other end of the scale from ristretto. Instead of using less water, you use more for a longer shot. As we explained earlier, using more water causes higher extraction but weakens the drink. A typical long shot is more bitter and has a less complex flavor than espresso. However, it’s also less concentrated and therefore more palatable for coffee enthusiasts more used to drip coffee.

The more you learn about espresso, the more you’ll realize that tiny changes can cause a significant difference. For example, the difference between a beautiful or undrinkable shot can be as little as one or two seconds of extraction time or a few more or fewer grams of coffee.

Because of this, it’s worth trying ristretto, even if you’re not a huge fan of espresso. It may surprise you how much it differs from espresso, and it may even become your new favorite coffee fix!

Contents
1 What Is Espresso?
2 What Is Ristretto Shot?
3 About The Brew Ratio
4 How To Make Ristretto
5 Why Ristretto?
6 Ristretto vs Espresso
7 Ristretto vs Long Shot (Lungo)
8 Final Thoughts