Can You Reuse Coffee Grounds For Another Cup? We Tested It For You

August 13, 2021April 28, 2021 // Chris Clark
Last Updated: August 13, 2021
We review and suggest products independently, but if you buy a product via the links in our posts, we may earn an affiliate commission at no cost to you. 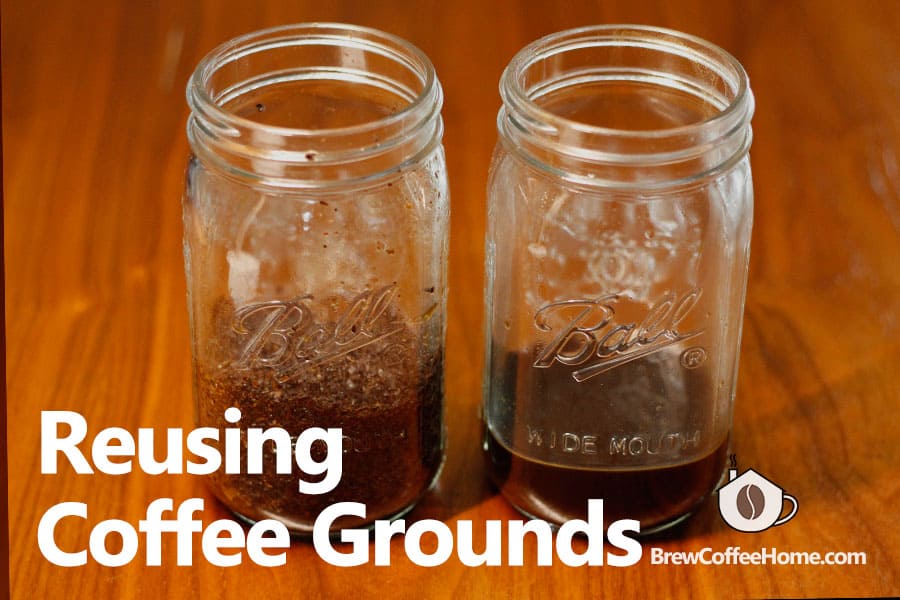 If you drink several cups of coffee every day, you’ll be well aware of the amount of used grounds that consumption generates. But do those grounds need to be disposed of after one use, or can you reuse coffee grounds for another cup of coffee?

We have conducted a few experiments using different brewing methods with reused coffee grounds to see how the finished coffee turned out.

We have also come up with some new ways you can use old coffee grounds so you can get the best possible value from the grounds your coffee-brewing endeavors generate.

Make sure you read on before you throw those used coffee grounds away!

Can You Use Coffee Grounds Twice?

Our short answer is yes! However, if you are hoping for high-quality results, we don’t recommend doing it. That’s because if you reuse coffee grounds, you will get weak and dull coffee for your efforts. Still, on the plus side, it will be caffeinated.

Another consideration is the build-up of bacteria. Used coffee grounds have exposure to the air and are moist, meaning they are an ideal breeding ground for bacteria. If you do choose to reuse the coffee grounds, do so once they are cool, and don’t use old grounds that have been exposed to the air all day. Also, make sure you only reuse them once, as the benefits of using them more than this will be negligible.

How Much Caffeine Is Left In Used Coffee Grounds?

If you brew coffee with used grounds, is there enough caffeine to have an effect?

One report states that most coffee beans contain a caffeine concentration of between 10 mg/g and 12 mg/g. However, a separate report reveals that with used coffee grounds, those numbers drop to between 3.59 mg/g and 8.09 mg/g.

By analyzing those figures, we can see that used coffee grounds still hold a reasonable amount of caffeine content despite the drop. The question is, does this mean that, even with diminished coffee flavor, we can still feel the effects of the caffeine from coffee brewed with used grounds?

Not exactly. Caffeine is extremely water-soluble. The amount of caffeine contained in the spent coffee grounds changes depending on the brewing method. Factors including brew time and coffee grind size will affect the amount of caffeine that ends up in the coffee. Therefore, if you’d like your coffee brewed with reused grounds to have the same caffeine amount as the original brew, you will have to alter the amount of water you use, the brewing time, and the water temperature, among other things.

However, considering the analysis conducted in the studies quoted earlier, we can get a good idea. If you use the same brewing method with reused coffee grounds, you will extract some caffeine, but it will be less than the first time. Indeed, it might not be enough to have a particularly noticeable effect.

As with other articles on this website, we always like to put things to the test rather than speculate. So, to offer some guidelines for using coffee grounds twice, we have used some popular brewing methods, first with fresh grounds, then using those grounds again, to determine how the two compare in the look and the coffee taste.

Using the Hario V60, we have experimented making pour over coffee with fresh and used grounds.

For this experiment, we used Kenya Kiambu Gititu medium-roasted coffee beans. The coffee has grape-like acidity and a heavy sweetness, with a profile that’s fruity and bright.

Unsurprisingly, the second cup was not nearly as dark as the cup brewed with fresh grounds. Indeed, the first cup resembled coffee, while the cup brewed with the reused grounds was more like a cup of tea. From the appearance alone, you will be able to gather that the taste will be weaker too.

The batch brewed with fresh grounds tasted beautiful. The taste was complex, with sweetness and acidity at the forefront. Meanwhile, it had a good body.

In brewing the second cup of coffee with reused grounds, we reduced the ratio of coffee to water because of the watery appearance during the brewing process.

On smelling the second cup, there was no discernible aroma except for an offputting whiff of oils. Meanwhile, the taste was slightly sweet but seemed under-extracted. Replacing the complex flavors of the original was a taste of sugary water with a hint of bitterness.

To us, the taste of the second batch was more akin to a French press coffee, albeit with only 5 grams of grounds using a whole pot of water. While it was palatable, it wasn’t particularly appealing. We think the results will be about the same with a drip coffee maker, too.

Next, we pulled an espresso shot using the Barista Pro. We opted for our local roaster’s freshly-roasted espresso blends. Meanwhile, rather than a bottomless portafilter, we used a pressurized one. That’s because we wanted to avoid mess while brewing the second cup because the channelings would cause the coffee to spill.

For the first shot using fresh coffee grounds, we measured 18 grams of coffee to give us 36 grams of espresso in around 30 seconds. As expected, the result was a tasty and intense espresso topped with a rich crema.

Using the same portafilter, we brewed the second shot using the same grounds. The result was a far lighter effort (both in look and flavor). Meanwhile, the crema was far more bubbly, and the overall brew was more watery.

The first espresso shot had a balanced taste with a pleasant texture, clarity, and sweetness. It was an enjoyable espresso shot that we would expect using the Barista Pro with those coffee beans.

Meanwhile, the second shot was weak, hollow, and virtually tasteless. The taste (or lack of) was a particular sticking point. To our palates, it was undrinkable and bore no resemblance to an espresso.

Can you reuse coffee grounds for cold brew? Ordinarily, we opt for a significant amount of coarsely ground coffee for extraction. And, when filtering, we can tell that the grounds still have a pleasant, inviting smell. We steep the grounds for 16 hours, as well. So, can they be used again in another jar?

We’ve learned from the previous experiments that using old grounds leads to a weaker coffee. So, we steeped the coffee grounds for the cold brew for 24 hours to see if that improved the result. We used the identical ratio of 1:3 for the concentrate. Since the coffee grounds absorbed lots of water, so we thought the 2nd batch of coffee should taste stronger.

The jar of cold brew made with the fresh grounds was highly condensed and well-balanced once we’d diluted it with milk or water. That’s because the low brewing temperature and lengthy steeping time leveled out the acidity and bitterness.

Meanwhile, the batch that reused the coffee grounds tasted more akin to ready-to-drink cold brew than concentrate. It didn’t have as robust a flavor as the first batch. However, unlike the espresso, it was still drinkable.

Conclusions From The Experiment

Overall, the results weren’t good enough to warrant using the coffee grounds more than once.

In our opinion, you shouldn’t feel bad for discarding coffee grounds after a single use. After all, the coffee beans are only supposed to be used once, so as long as you enjoyed the original coffee, the coffee beans have served their purpose.

If you do want to reuse the coffee grounds, we suggest only doing so with cold brew. That’s because it’s the only brewing method where the results were pleasant enough. As for considering using coffee grounds a third time, forget it!

As we have outlined in this article, generally, used grounds are not suitable for brewing another batch of coffee. However, you can still repurpose old coffee grounds to get the maximum value from them.

Read on for our list of additional uses for coffee grounds once you have used them for brewing coffee.

1.To Absorb Food Smells In Your Fridge

Scatter your spent coffee grounds on a baking sheet and leave them to dry, and they can take on the qualities of baking soda. To that end, the used grounds will make an effective means of reducing the odor of food in your fridge.

Place some of the used grounds in a small open container and place it in the fridge for a few weeks. Then, let the grounds get to work on absorbing the odors. We tried it and were impressed with the results.

2.Remove Unpleasant Odors From Your Hands

Anyone who regularly chops pungent vegetables such as garlic and onions or handles raw fish will be aware that the odor can transfer to your hands. Used coffee grounds can help combat this issue.

Keep the grounds in a container in your kitchen so they’re easy to access. Cover your hands entirely with the coffee grounds and rub them together with some water, and the smell will disappear.

You can produce an effective body or hand scrub using old grounds by adding a cup of coarse sea salt to one cup of the coffee grounds. Next, add a cup of coconut oil and mix them well.

This will leave a rough natural body and hand scrub that will remove dirt particles and exfoliate the hands, leaving them clean and shiny.

Coffee grounds are excellent for scrubbing pots and pans and even removing grime from your stovetop cover.

Take a thin cloth and place some of the spent coffee grounds onto it, then begin scrubbing the food and grime that’s collected on either your stovetop, pots, and pans to make them impressively clean.

5.Use Them In The Garden

A great way to stop pests from eating vegetables and plants in your garden is to scatter some of your used coffee grounds in among them. Doing this will stop bugs, slugs, and ants from making a meal of your garden.

Also, if you sprinkle the used coffee grounds over your flower and plant beds, the acidity in them will lead to a healthier garden.

Used coffee grounds also double as an effective fertilizer because they’re nitrogen-rich. Plus, they have garden-friendly minerals, including calcium, magnesium, and potassium. If you aren’t ready to use the coffee grounds immediately, put them in your compost bin or heap. Then, when you are ready to do your gardening, the fertilizer will be available.

If you enjoy the aroma of coffee, you can turn used coffee grounds into a candle.

You can do this by microwaving for around 90 seconds or using the double boiler method. Melt some candle wax at a temperature of around 170F. While the wax cools to around 150F, place a wick in the middle of a far and gradually pour in some of the melted wax. Then add some of the used coffee grounds. Wait for around a minute, then continue adding layers of wax and coffee grounds until the jar is full. Finally, cut the wick to the correct size, and your coffee-scented candle will be ready.

Conclusion: You Can Reuse Coffee Grounds In A Number Of Ways

While our experiments told us that reusing coffee grounds twice to brew another cup of coffee is almost always a poor idea, there are many other ways to ensure you don’t waste the used grounds after you’ve enjoyed your coffee with them.

Now you just need to work out how you would like to repurpose them and give one of the methods we’ve described in this article a go!