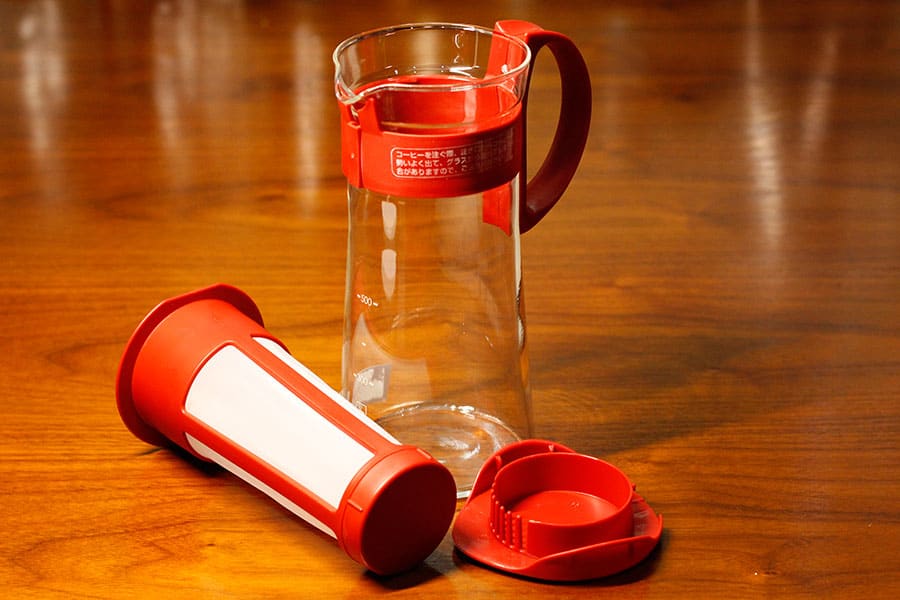 We’re big fans of cold brew. One of the main reasons is it’s not too difficult to make. You can use simple brewing devices to achieve the similar coffee quality you’d expect from a coffee shop.

Cold brew has risen in popularity in recent years. Therefore, the variety of cold brew makers that have come onto the market has increased. This is great, but it does make the issue of choosing the best one for you that bit more difficult.

In this detailed review, we’ll take a look at one of the better options available with a hands-on review of the Hario Mizudashi Cold Brew Coffee Pot – a budget-friendly, easy-to-use way to make cold brew at home.

If you’re familiar with Hario’s products, you won’t be surprised to see how simple this cold brew coffee maker is. It is reminiscent of the V60 dripper, with a simple design and red coloring.

This cold brew coffee maker consists of a glass carafe with a lid and handle made from plastic. Meanwhile, there’s also a strainer with a filter of fine nylon mesh. Indeed, the filter should stop most of the fine particles from making their way to your cup.

In keeping with Hario’s other products, this coffee maker has a simple, clean look. This immediately reassures the user that operating the coffee maker will be a straightforward affair. It’s the typical minimalist Japanese design that emphasizes functionality and user-friendliness rather than gimmicky extras.

The materials used in this coffee maker’s build are likely one of the main reasons it is so affordable. However, you can take reassurance from the fact that Hario is regarded as the “King of Glass.” So, as long as you are careful with it while moving it around or cleaning it, you shouldn’t have any durability problems.

The Hario Cold Brew maker comes in two sizes (one 600ml, the other 1000ml). Meanwhile, there are three color choices – red, black, and brown.

The one we are reviewing is the red one with a capacity of 600 ml.

This is a very easy-to-use cold brew maker, taking all the hassle out of brewing great cold brew coffee. All that’s required is to grind your coffee beans and place them in the filter. Then, gradually add water to the carafe until it has submerged the coffee. After the brewing process is complete, remove the filter from the coffee container, empty it of the grounds, and place your carafe in the refrigerator.

If that sounds straightforward, the process is made even easier by measurement markings that are prominent on the side of the carafe.

One drawback is that the manual supplied with the coffee maker is Japanese-only. We found the English version for you.

Also, the product is dishwasher safe. Cleaning and washing the filter is also extremely easy, thanks to the lid at the foot of it. Unscrew the lid so you can easily clean the coffee grounds out.

Quality Of The Brewed Coffee

The Hario Mizudashi has been specially designed to make cold brew coffee that’s ready to drink instead of coffee concentrate. You don’t need to dilute it with either milk or water.

If you aim to concentrate using a coffee to water ratio of either 1:3 or 1:5, the grounds will not be completely submerged in the water.

This differs from other cold brew coffee makers, which ensure any amount of water is enough to immerse the grounds. Because of this difference, the Hario won’t give you the cold brew concentrate, and you won’t have the same level of control over the brew ratio. This means that the flavor may suffer somewhat and not be quite as rich as alternative cold brew methods.

Despite this, you will still be able to change the brew ratio. By adding more ground coffee, you’ll be able to recover some of that missing flavor. Even if you do this, you will be restricted to 100g of coffee in one go (if you’re using the 600ml size).

Another option is to try making finer grounds. However, this will increase the possibility of over-extraction because of the drawn-out immersion time. Keep this in mind, as it’s not ideal to have a bitter taste in a cold brew coffee intended to be smooth.

The more you tweak, the closer you’ll get to finding your ideal ratio that gives the intensity of flavor profile you’re looking for without the acidity or bitterness.

As we noted earlier, there are two versions of the Hario Mizudashi – a 600ml and a 1000ml version, and the latter is around the size of the OXO Good Grips cold brew system we reviewed before. However, because the Hario isn’t able to produce coffee concentrate, you’ll get fewer cups of coffee. It can’t compare with the Toddy cold brew system or Filtron that can brew a big batch of coffee. We previously reviewed the Takeya Cold Brew Coffee Maker, which can brew two quarts at once.

If you’re an occasional drinker of iced coffee or only drink one or two cups a day, this isn’t likely to be a problem, and that drawback is at least partially offset by the Hario’s simplicity too. With the Hario, there’s no need to dilute more concentrate whenever you want a cup of coffee – you pour it out and begin sipping.

Despite this ease of use, the fact remains that the Hario won’t offer you the ability to store a couple of liters of concentrate in the fridge, meaning this could be a deal-breaker for particularly enthusiastic cold brew coffee drinkers.

As with most of Hario’s other products, the Mizudashi coffee brewer is available at a very reasonable price, meaning even those on fairly tight budgets can try out cold brew coffee made at home if they want to.

Other cold brew processes involve allowing the ground coffee to interact with the water for between 12 and 24 hours. However, with this product, Hario is clearly attempting to reduce that time. The manual suggests grinding your beans to a medium or medium-fine size rather than the coarser grounds you’d normally need, then brewing the coffee in the fridge for 8 hours (rather than 12-24 hours). We followed the manual and tried it out.

Recipe In The Hario Mizudashi Manual

Please note: This recipe’s measurements are for the 600ml version of the Hario Cold Brewer. If you’re using the 1000ml capacity version, use 80g of coffee and 1000ml of water.

Our opinion and adjustment

This recipe provided a brew taste that was a little too weak for our tastes. So, we made a few tweaks to find a sweet spot we were happy with. We opted for a medium grind we’d use for a Chemex and changed the coffee to water ratio to 1:9. That means using 70g of the coffee grounds for each batch of cold brew coffee rather than the recommended 50g. Also, rather than placing it in the fridge, we brewed the coffee at room temperature for 12 hours and more extraction.

Also, don’t pour the late drop since there are still a small amount of residues settled at the bottom.

Of course, individual tastes vary. Feel free to make your own tweaks until you find a brew that incorporates the flavor profiles and brew strengths you’re happy with.

Our Verdict – A Budget Option for Everyone

We’ve attempted cold brewing in several different ways, from using mason jar to a French press cold brew, as well as the specialist coffee makers that are meant for brewing cold brew coffee. Regardless of what you use, there’s no reason why making cold brew coffee should be frustrating or difficult.

The Hario Mizudashi Cold Brew Pot takes all the hassle out of making cold brew coffee and at a price that should be appealing to most budgets. Not only that, but it is easy to clean. It doesn’t require any particular expertise. Just add some ground coffee to the water and let the machine do the rest.

Yes, the product has its limitations, and it may not be ideal for people who drink several cups of cold brew coffee a day. Still, if you’re an occasional cold brew coffee drinker or only want one or two cups a day, this is about as hassle-free as making cold brew coffee you’re ever likely to find.