Frappe vs. Frappuccino – What’s The Difference Between Them? 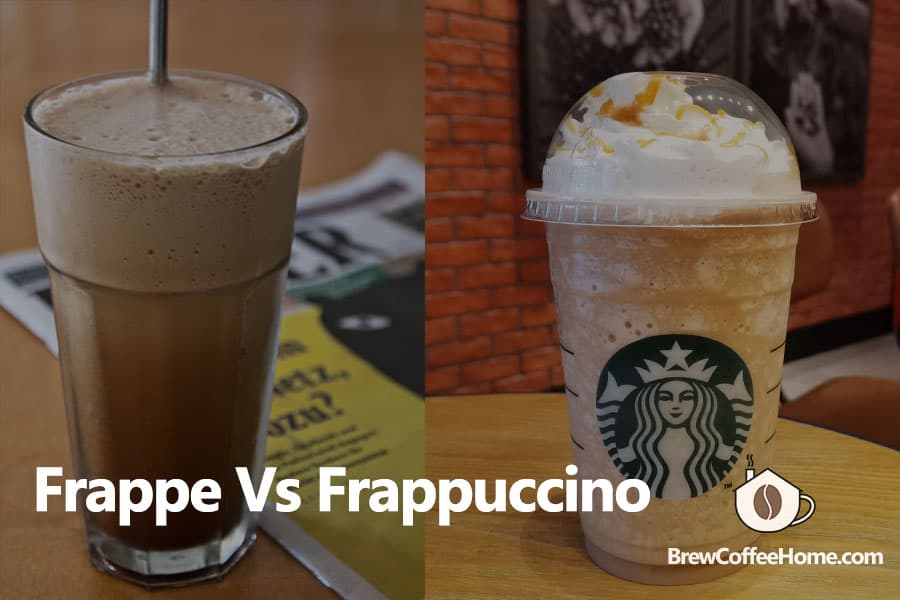 Particularly in the summer, you’ll often see frappes on the menu in regular coffee shops or Frappuccino in Starbucks, but what are they, and how are they different?

Most people who enjoy iced coffee drinks in the warmer months will be aware that frappe and Frappuccino fall into this category, but what separates the two beverages is not as commonly known.

This article will take a look at those questions, so you’ll know which to order next time you need a refreshing coffee drink.

Frappe is a Greek iced coffee drink made with instant coffee, sugar, water, and milk. It was invented in 1957 in Thessaloniki, when a Nescafe representative, Dimitris Vakondios, created the beverage through experimentation.

Vakondios was eager to find a way to enjoy drinking sweetened instant coffee without overheating. So he added instant coffee, ice cubes, and sugar to a shaker and made the first frappe.

However, that wasn’t the end of the story. Before long, Starbucks bought Coffee Connection and made coffee drink with a blender. That is the version of a Frappuccino the coffee giant serves today.

Similarities Between Frappe And Frappuccino

First of all, both are iced drinks.

Over the years, the two cold coffee drinks have become more similar to each other than the original versions. So, while the frappe originated in Greece and was made with instant coffee and shaken, the Frappuccino began in the US, used espresso, and was blended using granita, then soft-serve coffee machines.

Nowadays, they are virtually indistinguishable from one another. Each beverage is made using a blender, and frappes can use espresso too.

Starbucks trademarked the name Frappuccino, so you should only see it on the menu in its outlets. Elsewhere, frappes are served instead.

However, while there may be slight variations in frappe recipes depending on where you buy the drink, they are effectively the same as a Frappuccino – an iced beverage made in a blender with espresso, ice, sugar, and milk.

Differences Between Frappe And Frappuccino

While espresso is a common feature of frappe nowadays, it’s still not that unusual to find it with instant coffee instead. However, a standard Frappuccino always uses espresso as a base.

Another significant difference is the wider variety of Frappuccinos Starbucks offers. So, there are creme based-Frappuccinos which are largely caffeine-free and include mocha, caramel, strawberries, and creme and chocolate. Various syrups and sauces are also often added to create different Frappucino flavors. As a result, Frappuccino often tends to be sweeter than frappe.

In contrast, if you’re using instant coffee for an authentic frappe, it will have a more bitter coffee flavor, giving it a distinct character.

Related to the predominance of syrups and sauces in Starbucks Frappuccinos, this iced drink is often the more calorie-dense of the two drinks. For example, a vanilla-flavored frappe contains around 150 calories, while a strawberry Frappuccino contains 250 calories.

Another reason the calorie count is often lower in frappe is that instant coffee has virtually no calories. Also, because one of the main characteristics of frappe is the coffee taste, it is often prepared with only two tablespoons of sugar to accentuate it.

Because Frappuccino is made an espresso-based, it also more closely resembles a creamy cappuccino – as its name suggests. Meanwhile, a frappe tends to have a darker color.

Another difference is their availability. You’ll typically find frappe more common in Europe than in the US, which isn’t surprising considering its origins.

Of course, except for the geography, these differences depend on the recipe you choose. For example, if you order a frappe with syrup or whipped cream, you could easily have a drink with a similar calorie content and sweetness as a Frappuccino. Typically, though, that isn’t the case.

The ingredients of the two drinks are very similar – coffee, ice, milk, and sugar. Both frappe and Frappuccino can use different varieties of milk and either sweetener instead of sugar, for example.

However, the main difference between a frappe and a Frappuccino is often the type of coffee you use. For a frappe as true to the original as possible, use instant coffee. For a frappuccino, use espresso.

In addition, there are also several creme Frappuccinos, such as the varieties we listed in the previous section and Chocolate Cookie Crumble, Matcha, and Chai Creme. Of course, Starbucks is also well known for its vast range of options, so these can be modified to suit the customer’s preferences.

As for frappe, there is no reason why similar recipes can’t be used to create them. As we outlined earlier, the primary difference is that Frappuccino is trademarked, meaning outlets other than Starbucks are forbidden from calling it a Frappuccino.

Preparation And Recipes – Frappe vs Frappuccino

As we’ve established, there is often little difference between a standard frappe and a Frappuccino. If you want to stay as authentic as possible to the original frappe recipe, opt for spray-dried instant coffee as the base and use a shaker to blend the drink’s ingredients.

However, you can also use an espresso base and a blender to combine the ingredients, more in keeping with a present-day Frappuccino. Here is an excellent recipe to try.

Method For Making Frappe At Home:

You can also use a cocktail shaker or blender. If you’re using a shaker, shake it for around 30 seconds until you have a smooth foam. Blend for around five seconds in a blender.

Note: A blender is a must-have for making Frappuccino at home.

Method For Making Frappuccino At Home:

Final Thoughts – Are Frappe And Frappuccino The Same Thing?

While the original Frappe recipe had some significant differences from the first Frappuccino, the two beverages have become somewhat interchangeable. The main difference nowadays, in fact, is probably the name, with the latter reserved for Starbucks.

That’s not to say that there’s a hard-and-fast rule for making a frappe or a Frappuccino. Indeed, Starbucks has many varieties of refreshing summer drinks. Not only that, but the brand gives its customers scope to tweak its recipes to their preferences, too.

Similarly, while there is an authentic way of making a frappe (instant coffee, ice, sugar, and milk blended in a shaker), there are many ways you can make one, using syrups, sauces, and different types of milk and different ratios. Similarly, you can also prepare them differently, including a blender like a Frappuccino.

Like many coffees, how you enjoy your frappe or Frappuccino is virtually up to you. One thing is for sure, though – if you find your perfect recipe, you’ll have a delicious and refreshing summer drink, regardless of the name.