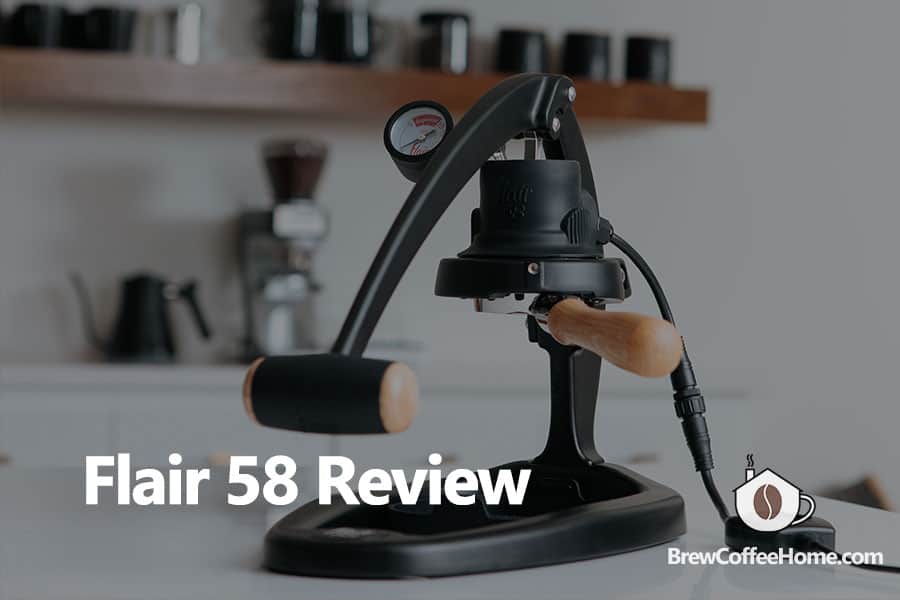 The Flair espresso maker is well-loved among coffee enthusiasts for its solid build, beautiful aesthetic, and ability to make gorgeous espresso shots. However, the workflow of the machine can be tricky. The Flair 58 promises to solve that issues and introduce other improvements, including more control of your shots. But is it worth upgrading?

This article answers that question so that by the end, you’ll know whether the Flair 58 is worth buying.

If you’re familiar with Flair espresso maker products, you’ll know they have solid materials, and the Flair 58 maintains the tradition. A more robust frame is made of die-cast aluminum. Meanwhile, the machine’s components are stainless steel, which means they’re not only hard-wearing but ensure a plastic-free water path.

The lever is longer than other Flair models, while in place of the rubber-covered handle of those machines is a classy wooden T-shaped grip that’s far easier to pull.

When the lever isn’t extended, the machine is compact, too, at just 7.5in wide, 14in deep, and 11.5in tall. However, with the lever fully raised, the height becomes a substantial 24.25in, so you need to consider where it’ll fit in your kitchen.

The Flair 58 also has a 58mm bottomless portafilter, hence the name. Its handle also has the same wood finish as the grip, which looks great.

Finally, the machine is only available in black, which is a slight disadvantage over previous Flair lever machines available in several colors.

Overall, this is a sleek and beautifully finished machine with easy-on-the-eye curves. It’ll look great in any kitchen.

What’s Special About The Flair 58?

As we mentioned earlier, the Flair 58 has a 58mm portafilter. Meanwhile, there is a significant improvement in the workflow of the Flair 58 over previous Flair products, thanks to an electric preheat controller.

58mm portafilter – you’d typically expect a portafilter of this size in a commercial setting. The portafilter is also bottomless, so if you encounter any extraction issues, they will be easier to pinpoint. Another advantage of the Flair 58 is that it’s compatible with most 58mm portafilters and accessories.

Puck screen – the puck screen is designed with even extraction in mind. The grounds screen has the Flair 58 branding, which is a nice touch, but the performance makes it stand out. It softens the delivery of the water to the coffee bed to stop channeling. Another advantage is it ensures the brew head doesn’t need as much cleaning, as it traps any coffee residue that collects in the mesh, meaning you just need to rinse it out under a tap.

Preheat temperature controller – you needed to preheat the brew chamber for the best espresso shot in previous Flair products. However, the Flair 58 introduces three heat settings (85°C, 90°C, and 95°C), allowing you to adjust depending on whether you’re using light, medium, or dark roasts (choose a lower temperature for dark roasts and the highest for light roasts).

You can ensure proper preheat with the press of a button. Preheating takes around four-and-a-half minutes, and when it’s ready, you can pull your shot. The preheat controller ensures a far easier workflow, mimicking the process of a standard espresso machine. You can easily pull multiple shots with less preparation.

Indeed, Flair is known as a non-electric level machine, now requiring a power supply makes it less portable. However, many flair owners are using it as an alternative to espresso machines for their everyday coffee routine instead of a portable coffee maker. This is definitely a great update.

Valve plunger – with older Flair products, you remove the stem to fill the chamber with water, then reinsert it before pulling the shot. Now, the process is more straightforward. Leave the plunger in its natural position after pulling a shot, fill the reservoir, and raise the lever to open the valve, allowing water through.

Pressure gauge with stainless steel stem – the integrated pressure gauge makes it easy to control the pressure as you pull the lever. It has clear markings, so you know exactly the force you need to apply to ensure you pull the shot correctly.

The biggest difference between the two machines is the improved workflow of the Flair 58. The preheat controller is the most significant we mentioned earlier. In contrast, the Flair 58X requires heating the brew unit using steam from your kettle.

Meanwhile, there’s a funnel to prevent spillage when you lift the lever after filling the hot water into the brew chamber. The brew head funnel is integrated into the 58X, while you have a removable one for Flair 58.

Overall, we think the Flair 58 has enough improvements to make it well worth upgrading. It offers a more streamlined workflow and – significantly – more consistent shots.

Workflow – How To Use The Flair 58

Whereas the Flair 58X required preheating using the steam from a kettle, the Flair 58 has an electric preheat.

Using the 58X, you boil some water in your kettle, remove the cap and place your brew cylinder on top. At this stage, place the stem on top of the cylinder, leaving a small gap to allow the steam through. The steam will rise into the cylinder, preheating it and the stem. Then you can add the pre-heated brew head to pull a shot.

In contrast, preheating the Flair 58 is far more manageable. Place the brew cylinder on the base and rotate it counter-clockwise until it clicks into position. Plug the temperature controller into the power supply. A single long press of the button on the controller sets it to the lowest temperature. A further short press changes it to medium, with a final press setting it to high. Each setting is indicated by the number of lights illuminated on the controller. A final long press turns it off.

Because you’re using a naked portafilter, you’ll need to prepare your coffee puck.

Once the coffee grounds are in your portafilter, distribute them evenly by tapping the side, sweeping your finger over the top of the grounds, or using the Weiss Distribution Technique. This involves using a WDT tool with thin wires to level the grounds.

Next, tap the portafilter base to settle the bed, then tamp. Finally, place the puck screen on top, lower the Flair 58’s lever and lock the portafilter in the brew group head.

In the previous models, you need to remove the stem to pour water into the chamber, but you don’t need to do this with the new Flair 58 and 58X. Now, you pour water in with the lever down, then slowly lift the lever to the top, ready to pull your shot. This is far less fiddly than the previous design and significantly improves the workflow and guarantees the optimal brewing temperature thanks to the upgraded valve plunger we mentioned above.

Step Five – Pull Down The Lever

Slowly begin pushing the lever down to get pre-infusion. The coffee will soon emerge, with the aim of 36ml of liquid in around 25 seconds. Once done, pull the lever back to the top to halt the flow.

Replace the espresso cup with a purge cup and bring the lever down again to remove the remaining water, then take off the portafilter and knock out the puck.

The espresso quality produced by the Flair 58 is seriously impressive, matching the quality of more expensive espresso machines. As a manual machine requires such a small space, this is impressive.

One reason is the ability to control the pre-infusion of the grounds manually – a feature usually reserved for pricier machines. With this fully manual professional-grade lever espresso press, you can manage lower or higher pressures for the best shots. Such pressure profiling is not available in many other espresso machines. Meanwhile, the machine’s long arm allows you to easily retain control over the shot’s flow and the subsequent espresso profile. The result is a sweet, balanced shot every time.

There aren’t many drawbacks with the Flair 58. However, it is tall with the lever up, so it won’t fit beneath many kitchen cupboards.

Another issue concerning storage is the power supply box is large, and the cord is long. Meanwhile, the PCB controller isn’t as elegant as the machine.

Finally, the drip tray is too small to hold a standard coffee scale.

Overall, though, these are minor issues that shouldn’t hold much sway over whether you should purchase the machine.

The Flair 58 is the most expensive in the brand’s line-up. It also costs more than many other entry-level espresso machines. However, the ease of use it offers, control over the shots, and incredible quality of the espresso it produces make it one of the best manual espresso makers around for the price.

The simplified workflow, 58mm filter basket, and automatic preheating mean it’s a significant improvement over its predecessor and well worth upgrading. However, if you’re not worried about the heating control the Flair Pro 2 is worth considering as an upgrade to the Flair 58, too.

We’re fans of the Flair 58X, but the improvements in the Flair 58 far exceeded our expectations. Almost every aspect of the new model, including its improved design, smoother workflow, and more consistent results, mean this is one upgrade that is well worth considering. You don’t need the second machine at for your daily coffee if you own this fully manual professional-grade lever espresso maker.

There are a few minor quibbles. However, these mainly concern storage rather than performance. Therefore, if you have the countertop space and want espresso at least as good as that produced by more expensive semi-automatic machines, the Flair 58 is the best option you’ll find in its price category.