Most Popular Coffee Chains in the World 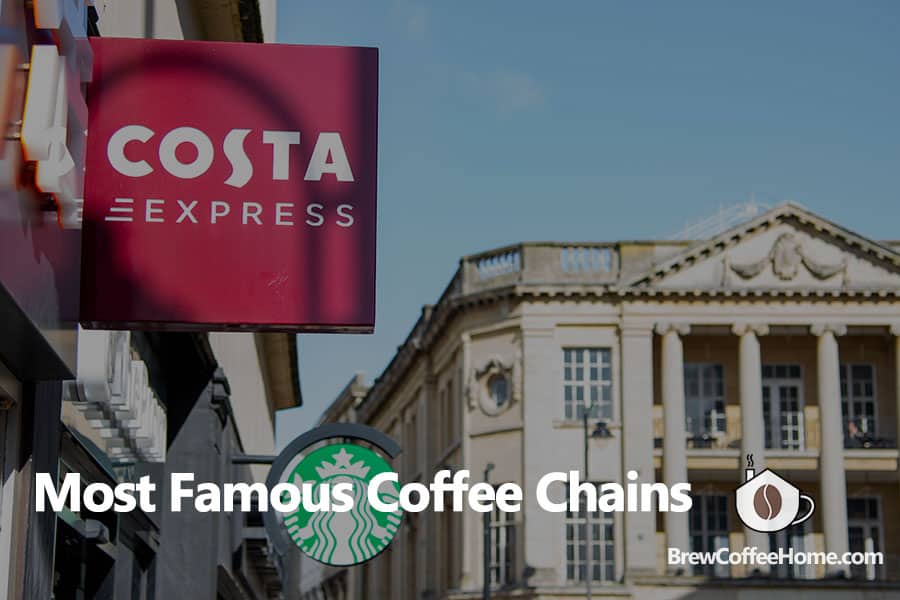 There’s no beverage more crucial to morning routines than coffee. Most of us have our favorite brand to throw in the coffee maker while we scramble to get ready for work. However, few homes have espresso machines, milk foam, and dozens of flavored syrups.

Below, you can read about the most popular coffee chains in the world to give you some insight into the coffee chain you patronize.

The following list of international coffee chains will explore the origins, growth, locations, and popular menu items unique to each chain. No matter where life takes you, you won’t be far from a tasty latte as most of these coffee shops have thousands of locations around the world.

Starbucks began selling espresso by the mid-80s, expanding its operations to include coffee shops in Canada, the Pacific Northwest, and the Midwest by 1987. Now Starbucks is one of the largest coffee companies in the world, with around 35,000 locations in 34 countries. Their headquarters remain in Seattle.

Starbucks has a reputation for great customer service along with decadent flavored coffee drinks topped with whipped cream and syrup. Some of their popular menu items this year include:

Besides hot and cold coffee drinks, their tea and refreshers are also worth trying. Here is a list of the popular Starbucks drinks gone viral on TikTok.

Dunkin Donuts is one of the oldest fast food breakfast chains, originating in Quincy, Massachusetts in 1950 as a donut and coffee shop.

Founder Bill Rosenberg noted that the most popular breakfast products requested by factory and construction workers were coffee and donuts, thus inspiring him to open a brick-and-mortar restaurant dedicated to the popular breakfast pair.

His idea paid off, as Dunkin Donuts now has over 11000 locations globally. The Rosenbergs sold Dunkin Donuts to Baskin Robin’s owner in 1968. While their signature products remain coffee and donuts, Dunkin Donuts has expanded its menu to include sandwiches, bagels, muffins, and more.

Their high-quality coffee has earned them the most praise, a fact that they have capitalized on by selling packaged coffee and pods at most major grocers around the US. Their original blend and iced coffee are the best value for the cheapest price. Other popular coffee drinks include:

Using his experience roasting coffee for his father along with the connections he made as a coffee and tea importer in London and the US, Peet opened Peet’s Coffee near UC Berkeley’s campus.

Peet’s Coffee was first a coffee roaster, selling beans exclusively. Then it has expanded to a mere 200 locations in the U.S., but they’ve become one of the most famous coffee brands in the world.

Their coffee roasting achieves an unparalleled level of excellence, with fan favorites sold in grocery stores around the US. Dark roast blends are the most popular, namely the Major Dickason’s and French Roast.

The most popular coffee at Peet’s is the purest form, iced or cold brewed coffee, and their lattes.

Founded by Gloria Jean Kvetko in a suburb outside of Chicago, Gloria Jean’s began as a mom-and-pop neighborhood coffee and gift shop in 1979. The popularity of the sugary and creamy coffee soon expanded to include 50 locations in the US before Coffee People bought the coffee chain.

A newer contender to the coffee house scene, Caribou Coffee started in 1992 in Edina Minnesota. The company’s origin epitomizes the hipster dream of quitting their corporate job to pursue their passion for coffee. In the case of founder John Puckett, his dream not only manifested but also bore fruit.

Puckett named Caribou Coffee after the majestic beasts he witnessed on a backpacking trip through Denali, Alaska. Using his background in business strategy, Puckett operated his coffee houses on weekdays to coincide with major businesses in the area.

Now there are over 700 locations globally, and Caribou Coffee is now under the leadership of Panera Bread. They sell unique breakfast sandwiches along with baked goods to accompany a wide selection of coffee and tea. Their most popular drinks include:

Unfortunately, Tim Horton died tragically in a car crash and would never see the heights of his shop’s success. Today Tim Hortons has over 7000 locations worldwide with headquarters in Toronto. Tim Hortons is as ubiquitous in Canada and the Western New York region as 7-eleven, selling coffee, donuts, and a myriad of baked goods, sandwiches, smoothies, and more.

Costa Coffee is an English coffee chain, originating in London in 1971 and expanding to include over 3400 coffee shops globally. Founder Sergio Costa used his Italian roots roasting expertise as a supplier to Italian espresso bars around England for a decade before opening the first Costa Coffee shop in 1981.

Their signature drinks are espresso derivatives, whether it’s a cortado, Americano, or Flat White.

McCafe is McDonald’s famous coffee brand; however, it originated as its own coffee shop in Australia in 1993. The Australian McCafe concept is intended to attract the working professional crowd by offering high-end espresso and coffee drinks. The concept caught on and McCafe’s soon opened in 13 countries, arriving in the US in 2002.

While the chain of McCafe coffee shops is relatively small, you can get the McCafe coffee brand at any of McDonald’s over 35000 locations worldwide. You can also find McCafe coffee sold packaged and in K-pods at grocery stores around the US.

Some of their most popular drinks include:

A predominantly US coffee shop chain, The Coffee Bean & Tea Leaf originated as a coffee catering service for offices around Los Angeles in 1963. Founders and married couple Herbert and Mona Hyman drew inspiration from their honeymoon to Sweden to begin importing high-quality coffee to roast and sell in their native LA.

They opened the first Coffee Bean coffee store in 1968, marketing themselves as authentic high-end coffee roasters where customers could watch the roasting process and sample the product before purchase. They began importing exotic tea, selling brewed tea and coffee in the 1980s, and expanding to include 10 locations in Southern California.

Today, The Coffee Bean and Tea Leaf have over 1000 locations in the US, with a growing international chain of coffee shops in Asia and the Middle East.

Some of their most popular drinks include:

Their passion for coffee caught hold, spawning their first brick-and-mortar coffee shop followed by the first franchise in 2000. Now they have over 600 locations in 11 US states.

They offer friendly and fast service with a small counter and a drive-through window at every location. Their menu includes classic coffees, frost milkshakes, energy drinks, tea, sodas, and hot cocoa. Some of their most famous drinks are:

The 10 most popular coffee shop companies in the world come from both humble beginnings and innovative business concepts. Most of them are fast-casual counters, specializing in quality coffee to-go.

You can delight in a delicious, well-crafted coffee in your hometown or on vacation at one of the thousands of coffee shop chains listed above.