What Is The E61 Group Head In Espresso Machines? 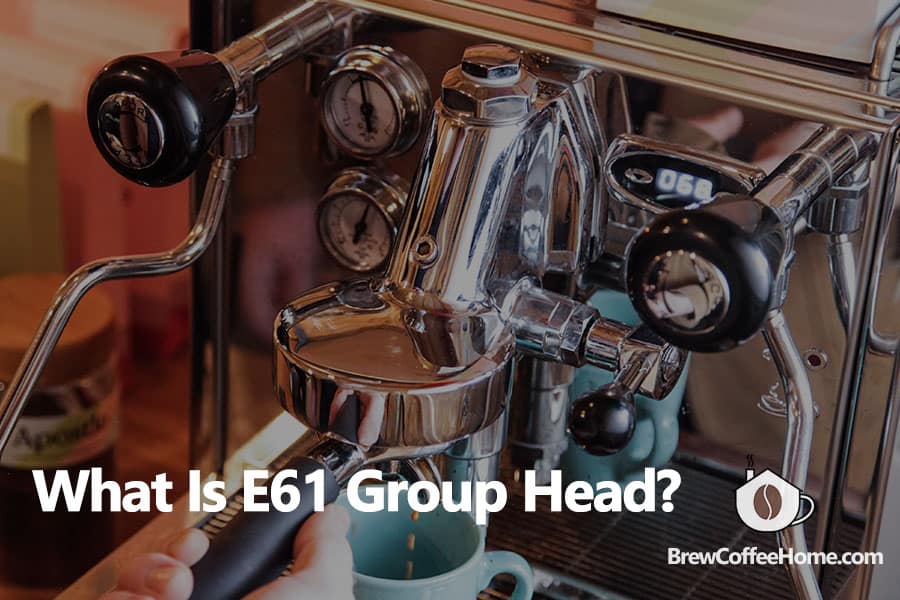 The E61 group head is commonly found in prosumer-level double boilers and heat exchanger machines. Therefore, before buying a high-end espresso machine, it’s essential to understand what E61 is and its advantages and disadvantages.

This article will examine the E61 group head, its pros and cons to give you a rounded idea of whether it’s something you’d like to look for before purchasing an espresso machine.

The E61 group head originated in the Faema E61 coffee machine in 1961. It has an exquisite design that has since become a classic in Italian machines. Even though it’s over half a century since its introduction, many high-quality prosumer espresso machines have an E61 group head today, such as the Rocket Espresso machines, Lelit Bianca, Profitec, Bezzera and more.

The E61 is a substantial chrome-plated brass group head with a lever attached to many brands and sizes of machines. For this reason, many prosumer-level machines may look similar at first glance.

The E61 has retained most of its original design features, although different manufacturers may have tweaked some of the elements internally. However, the mechanism is primarily the same regardless of the machine.

In short, you dose and tamp the grounds into the portafilter, lock it into the E61 group head, pull the lever, and the espresso comes out.

The thermosyphon effect in the group head assists in stabilizing the temperatures by constantly allowing the flow of water between the unit and the heat exchanger or boiler.

Also, the pressure gradually increases during the extraction process thanks to the ingenious internal design. This results in the automatic preinfusion feature – one of the most revered advantages of the E61 group head.

How Does An E61 Group Head Work?

First, let’s examine the anatomy of the E61.

The lever has a cam with a specially designed shape incorporating a mechanical three-way valve. There is a brew valve at the top, a pre-infusion valve in the middle, and a pressure relief valve (also known as a drain valve or exhaust valve) beneath it.

To make coffee, you need to lift the lever to a horizontal position. Then, the cam at the end of the shaft will open the brew valve and shut the preinfusion and pressure relief valves. At the same time, the switch behind the lever is pressed, and the pump begins working.

The pressure increases when the hot water reaches the brew chambers of the E61 group head. When the pressure exceeds 1.5 bars, the preinfusion valve opens, and the brew water enters the preinfusion chamber. This means that, beforehand, the coffee puck is soaked with hot water at low pressure. Once the pre-infusion chamber is filled, the hot water pressure begins to rise further until reaching the necessary 8-10 bars, where coffee begins to extract.

Once the coffee is brewed, you need to return the lever to a vertical position, which turns off the pump switch and stops the water pump. The cam can now shut the brew valve while simultaneously opening the preinfusion and pressure relief valves. The hot water under pressure is then discharged from the pressure relief outlet to the machine’s drip tray.

Benefits Of An E61 Group Head

The E61 group head and a standard brewing head differ insofar as two water pipes connect the E61 to the boiler or heat exchanger. The hot water in the boiler reaches the upper chamber from the top pipe. As this begins to happen, the temperature decreases while the density of the cooled water increases and has greater gravity. It then flows down the lower pipe back to the boiler.

Hot water naturally circulates in the piping between the boiler and the brew group. The phenomenon is called the thermosiphon effect, which stabilizes the temperature of the brewing head for a better extraction. As a result, it’s one of the most significant advantages of the E61.

Another benefit of the E61 group head is its automatic preinfusion.

The hot water pressure needed for making authentic espresso is the equivalent of 9-15 bars. If such a high water pressure is forced through a puck at once, it is not great for extraction and often causes channeling.

On the E61 group head, a preinfusion chamber is designed to slow the pressure. Also, the hot water from the boiler passes through the water inlet to several chambers and then the portafilter. To do so, it must go through narrow pipes, further restricting the flow.

So, with the E61 group head, the hot water pressure builds slowly, while this preinfusion process is completely mechanical.

Pulling a lever to pull an espresso shot is simply more satisfying than pressing a button. Meanwhile, the presence of a robust and shiny brew head lends any espresso machine a premium feel and aesthetic.

The E61 group head also weighs around 4kg to 5kg and is made from a substantial amount of chrome-plated brass, meaning it’s incredibly durable. In fact, it ought to work perfectly for many years with the correct maintenance.

Because the E61 has been available for so long and is so well-loved, there are lots of accessories you can buy to improve the machine. This means you can buy pressure or flow control accessories and thermometers. Also, gaskets, shower screens, o-rings, and other parts are easy to find from many sources.

Additionally, there are many guides online, meaning it’s easy to learn how to dismantle it, clean it, and troubleshoot if you encounter problems.

Drawbacks Of An E61 Group Head

As we explained earlier, the preheating is achieved by circulating hot water between the brew head and boiler. While this has advantages, it takes a relatively long time – between 20 and 30 minutes. Preheating your machine is important for the high-quality espresso, but that may be too long for many domestic brewers, especially those with a tight morning schedule.

The internal design of the E61 group head is simple, but because it’s made from a massive chunk of brass and copper, it’ll need descaling regularly to remove the build-up of limescale.

Also, because of the chambers’ design, you should back flush the group head every day after use and scrub the group head to remove the coffee oil and residue.

The gaskets are important parts of the E61 group head as they seal the valve and prevent leaking. Most leaking issues are caused by the gasket, so that’s another area it’s important to be mindful of when using an E61 group head. Overall, the E61 will need more care than a saturated brew group to ensure it remains in optimum condition over the longer term. Whether you think the extra effort is worthwhile will ultimately depend on preference.

In the 1960s, when automatic control technology was still expensive, the E61 group head offered a viable solution. However, nowadays, when microelectronics technology is very popular, it is relatively straightforward to achieve preheating and preinfusion.

There are debates about whether the E61 is effectively obsolete today because the saturated brew head offers similar or even better performance.

The heat will transfer far more rapidly from the boiler to the group head with a saturated group head. It’s also substantially lighter and has a quicker warm-up time. With PID control, the saturated brew group is also good at maintaining stability in the temperature from shot to shot without as much metal.

The saturated group head is the more complex of the two to build because everything is inside the boiler. Therefore, if it encounters an issue, such as leaking, you have to get inside the machine. In contrast, the E61 group head is easier to fix or even replace.

In the end, it will come down to preference and budget. For example, a dual boiler or heat exchanger machine with a saturated brew group usually costs more than machines with an E61.

The E61 group head has been around for over half a century and while it may not be the ideal solution nowadays and certainly has drawbacks, it still offers an elegant way to make espresso.

Of course, the rising saturated group head may appeal to some people and has its advantages too, but brewing with the E61 group head is unquestionably more enjoyable.

Suppose you’re a domestic brewer who considers the process of making espresso as enjoyable as the finished product. In that case, the E61 group head could well be the better option, as it will also ensure you get a beautiful espresso at the end of it.

Therefore, in our opinion, while the E61 group head may no longer be the only option on the market, it remains iconic and far from an obsolete piece of equipment.