Why Is Coffee Called Joe? – Cup of Joe Origin 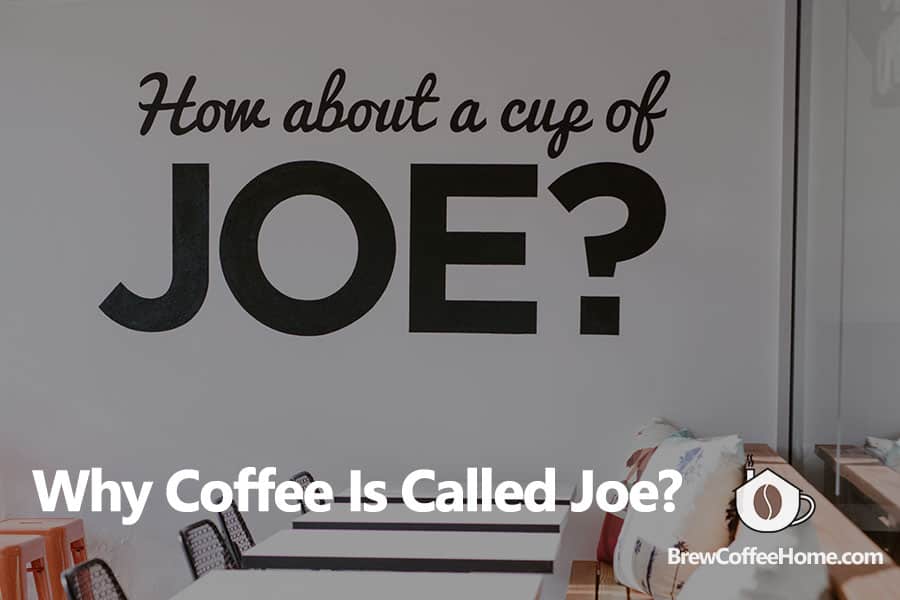 For millions of people, coffee is more than just a beverage. We rely on it to start our days and for a burst of energy, focus, and productivity.

Coffee has been a beloved part of our daily routines and cultures for hundreds of years. Its history dates back to the 1400s in Ethiopia, but coffee eventually made its way to the Arabian Peninsula, Europe, and the New World.

Throughout that time, we have given coffee many nicknames and slang terms. The origins of some of these names are easy to trace. A Cup of Joe has less clear origins.

Why is coffee called a Cup of Joe, and what is the Cup of Joe meaning?

Where Did a Cup of Joe Come From?

The phrase Cup of Joe first appeared in print during the 1930s. There are several competing theories for how the term originated. Theories range from references to historical events and people named Joe to basic linguistic evolution.

While coffee drinkers are not sure about the exact origin of “a cup of Joe,” the main stories that might explain its usage are below.

Four Main Stories about a Cup of Joe

Urban legend states that Navy crewmen, banned from drinking alcohol, chose the next strongest drink they could find, coffee. In a sarcastic jab at Josephus Daniels, they called a cup of coffee a cup of Josephus. The term eventually became a cup of Joe.

The Josephus Daniels theory is a popular origin story for Cup of Joe, but it is probably not true. Historians note that alcohol was not widely available on Navy ships before Order 99, so the prohibition likely did not have much of an effect. This theory prevailed in pop culture, however.

An Average Joe is someone who is not special and does not have any unique characteristics. Other variations of Average Joe include Joe Schmoe and Joe Blow.

And what does your average man or Average Joe drink? Coffee, of course! Average Joe isn’t sipping thousand-dollar bottles of champagne. He reaches for the accessible, affordable, and beloved pick-me-up drink and starts their day by drinking coffee.

The Common Man’s Drink Theory posits that we began referring to a cup of coffee as a Cup of Joe because it was what a hypothetical typical American male drank. An Average Joe drinks a Cup of Joe.

Joseph Martinson founded Martinson Coffee, Inc. in New York City in 1898. Martinson did door-to-door sales and promotions with his cart of freshly-roasted coffee. He developed a following as the product grew in popularity.

Joe’s coffee became a cultural phenomenon, and artist Andy Warhol depicted the Martinson Coffee brand in a 1962 painting. Consumers eventually began to refer to his product as Joe’s Coffee or a Cup of Joe.

Martinson Coffee still sells its good coffee today under the Mother Parkers Tea & Coffee Umbrella. The coffee description notes that the Martinson Cup of Joe is a trademarked phrase based on the care Joe took in preparing his coffee.

One popular theory for why we call a cup of coffee a Cup of Joe is based on linguistics. Two popular slang terms for coffee are java and mocha.

The Jamoke Theory is that people began combining the words java and mocha into the word jamoke. However, a cup of jamoke has a lot of syllables to say. Eventually, people shortened jamoke to Joe and a cup of jamoke became a Cup of Joe.

Other Fun Names or Slang for Coffee

While we might never know the true origin of the phrase Cup of Joe, we have some plausible and fun explanations. Experts have mostly narrowed it down to four leading theories.

Whether Joe refers to Joe Daniels, Joe Martinson, Average Joe, or a play on the word jamoke, Americans at some point in the early twentieth century began calling their beloved energy-inducing beverage a Cup of Joe and never looked back.

However, the origins of the nickname hardly matter. Millions of Americans – and people across the planet – love their coffee, no matter why we call it a Cup of Joe.

Contents
1 Where Did a Cup of Joe Come From?
2 Four Main Stories about a Cup of Joe
3 Other Fun Names or Slang for Coffee
4 Conclusion