What Is Peaberry Coffee?

August 17, 2021August 17, 2021 // Chris Clark
Last Updated: August 17, 2021
We review and suggest products independently, but if you buy a product via the links in our posts, we may earn an affiliate commission at no cost to you. 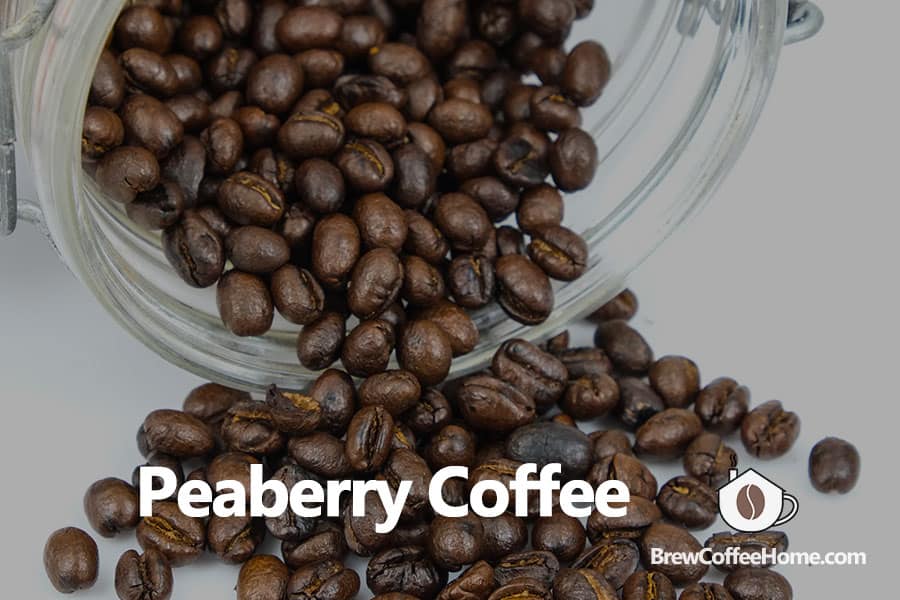 Peaberry coffee beans are extremely rare, and that’s reflected in their cost. But what is peaberry, and does it offer a cup profile superior enough to justify the price tag compared to regular beans?

This article will examine peaberry coffee to see whether the hype is justified.

What Is Peaberry Coffee Bean?

Regular coffee beans have two seeds inside the coffee cherry. However, the peaberry has only one. This represents a natural mutation of a bean that occurs in around 5 to 10 percent of the harvested coffee cherries. But how does it form?

Most coffee cherries have two beans that face each other, and the internal pressure forces it to form a flat side of the bean. This is why normal coffee beans have that familiar rounded side and a flat side.

However, with a peaberry, one of the beans dies early due to mutation. As a result, that bean forms a small wrapping around the other seed in the coffee cherry, leaving a round shape to the bean.

If you examine the two types of bean as cross-sections under a microscope, you’d see that the regular coffee seed resembles a sea sponge with abundant air holes, whereas the peaberry seed is far denser than other coffee beans.

Where Does The Peaberry Bean Come From?

Peaberry beans are naturally occurring mutations of coffee cherries whose prominence in a harvest is unaffected by region. In other words, a farmer can’t grow a coffee crop that only produces peaberries – they need to be separated from regular cherries after harvesting.

That’s not to say that certain coffee-growing regions don’t have better reputations than others for their peaberry coffee beans. Indeed, Brazil, Kenya, Kona, and Tanzania are well-regarded peaberry producers. In our best coffee beans buying guide, we also included peaberry beans on the list. However, this reputation is to do with their ability to process, sort, and produce peaberry coffee, while they also enjoy the ideal climate for growing coffee beans in general.

Why Is Peaberry Coffee So Expensive?

Peaberry coffee is generally more costly than regular beans, even when they originate from the same roasters. Here’s why.

As we touched on earlier, only around 5 to 10 percent of a harvest is peaberries, and, like diamonds, an item is usually more expensive when it has a limited supply.

Once coffee cherries are harvested, processed, and dried, the beans need sorting. This is necessary to remove defective beans, grade the coffee, and find the peaberries. This process mainly takes place by hand, although it is possible to do it with a machine. To do this manually is tricky and takes time because finding five to 10 peaberries in every 100 is no easy process. This extra labor, along with the rarity, adds to the expense. For example, the Kona peaberry has a strict sorting standard to make sure the quality of the beans.

The consensus in the coffee community is that peaberry coffees have a superior flavor to normal beans. One reason is that because of the higher price, they are treated with extra care from the moment they are harvested.

There are many steps to take coffee from seed to cup, including planting, harvesting, processing, sorting, grading, and roasting the beans. Because of their higher price, the peaberry bean is the highest priority. Therefore, if you buy peaberry coffee from a well-regarded brand or roaster, it will usually have premium quality.

Does Peaberry Taste Better Than Other Coffee

We now know why peaberry coffee is more expensive than regular coffee, but does it taste better? The short answer is yes, but maybe not for the reasons you’d think.

Many coffee lovers say that peaberry has a higher flavor concentration because the nutrition is stored in one seed rather than two, creating a better flavor profile. This is a logical argument. However, many coffee experts conclude that any advantages of this are negligible.

The growing condition, variety, processing method, and roasting affect both regular and peaberry beans’ flavors. How you brew each bean will also affect the taste. You may even find the occasional peaberry bean in a regular bag. That’s because both regular and peaberries come from the same batch, so they are grown, roasted, and processed in the same way. This means that the flavor profiles will be similar, and you might not notice much difference in your cup of coffee.

However, peaberry beans are usually branded as “peaberry coffee” and sold as a premium product, so they were probably grown in the best possible conditions, processed, and roasted in a more optimal way than regular beans. Naturally, this leads to a better quality overall.

In other words, the superior quality flavor of peaberry coffee is likely to be primarily a result of the extra care given to it as it made its way from seed to cup.

Another element that ensures peaberries are superior is the roasting process. Peaberries are spherical, meaning they roll during roasting, allowing a more efficient and even heat transfer. In contrast, the regular bean can get stuck on the flat side when roasting, leading to uneven roasts, with charring on the flat side and not enough roasting elsewhere. The more even roasting is probably why some people find coffee brewed with peaberry coffee beans sweeter.

Another factor is that heat is transferred through peaberries differently as they are denser and have a rounder shape. So, roasters tend to use different speeds and variables when roasting peaberry coffee beans.

We don’t think peaberry coffee tastes significantly better than regular coffee because of its mutation. However, the extra care given to peaberry coffee beans at each stage of the journey undoubtedly improves the flavor. In our opinion, this is the main reason for the superior taste of the peaberry bean.

If you are a coffee aficionado, Peaberry coffee should be on your radar. When choosing peaberry beans, we recommend ensuring you’re paying extra because they have received this extra care, rather than simply because of the time and effort needed to separate them from regular beans. In other words, purchase them from a reputable, specialty roaster where possible. Doing this will help ensure your coffee has a fantastic flavor that warrants the extra expense.