What Is Nitro Cold Brew Coffee? 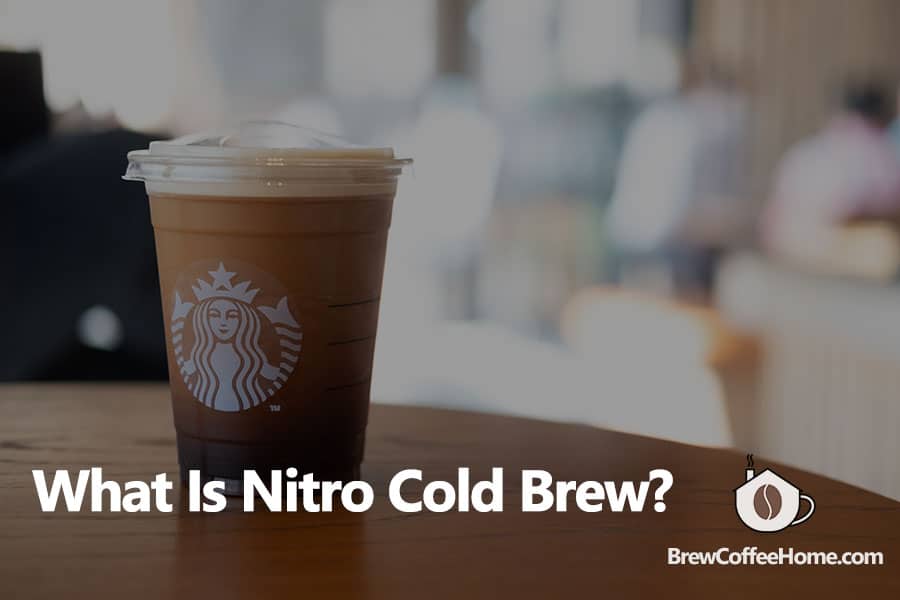 In recent years, you may have noticed the appearance of a new iced coffee on the menu of your local coffee shop, particularly in the warmer months – nitro coffee. The drink is essentially cold-brewed coffee with the twist that it’s infused with nitrogen to give it a creamier mouthfeel, sweeter flavor, and more appealing look. The drink is also made more enticing thanks to its foamy head.

Nitrogen-infused coffee is fast becoming a must for coffee drinkers, but where did it originate? Where can you get it? Can you make it at home, and what are its most attractive qualities?

This article will answer all of those questions, so you’ll know all the essential information about this different and delicious drink.

What Is Nitro Cold Brew?

As we mentioned earlier, nitro cold brew uses a cold brew and nitrogen gas (N2) to produce an altogether different drink from a standard cold brew. The result is a drink that is a little sweeter than a regular cold brew, thanks to the infusion of nitrogen.

This offers health benefits as coffee lovers with sweet tooth are less likely to need sugar. It’s not just the flavor that is appealing, though. The drink feels creamier than cold brew, while its signature foamy head and beautiful cascading bubbles resemble that of a freshly pulled dark beer.

Until fairly recently, nitro coffee was only available in coffee shops like Starbucks – and at a relatively high price of around $6. That’s all changed in recent years. Nowadays, you can also brew nitro coffee at home using either N20 or N2 gas cartridges, typically with a whipped cream dispenser, a specialist nitro coffee dispenser, or a keg system.

Nitro cold brew is thought to have originated in 2013 at craft coffee houses in Austin, Texas, and Portland, Oregon. However, there are also reports it emerged in New York two years earlier. Regardless, it began to take off when Starbucks began selling it across 500 of its outlets in 2016, increasing to over half of its US locations by 2020. Other companies also got on board, including Dunkin’ Donuts and Canadian coffee giant Tim Hortons.

To begin with, making the beverage at home was a hit-and-miss process, often involving improvisation with home brewing equipment. However, an increasing variety of specialist equipment has entered the market in recent years, making it a popular beverage to try brewing at home. Additionally, pre-made nitro cold brew is becoming more widely available in grocery stores and other outlets.

Why Is Nitro Coffee So Popular?

There are several reasons why nitro coffee is becoming so popular. One of the main advantages is making big batches by preparing them in advance. The drink can be kept in a keg for up to 10 days, meaning it’s easy to have a coffee whenever you want one.

Another advantage is the beautiful texture, which is creamy and velvety. In that sense, it’s not dissimilar to cappuccino, making it a healthy, less calorific option for people who usually prefer milk-based drinks. The drink is slightly sweet, too, meaning you’re less likely to need to add sugar or sweetener, which can also be healthier.

Nitro coffee is one of the most aesthetically pleasing beverages you’re likely to encounter. Its small bubbles cascade looks stunning, while it’s topped by a head of tight, small bubbles.

Overall, it’s an intriguing, refreshing, and delicious drink perfect for the summer.

Nitrogen is the magic ingredient of nitro coffee. It is that which offers this cold coffee its creamy mouthfeel, while the white, foamy head looks like the head of a Guinness beer. As the coffee enters the glass, there is a stunning cascade of colors and textures thanks to the cascading bubbles, again like a dark stout. The head can even give the drinker a cold crema mustache if poured correctly!

One thing the cold brew is mainly responsible for is the sweet taste, which isn’t so different from a standard cold brew. You can detect a naturally sweet taste as you sip your beverage.

What Makes It Different? Nitro Cold Brew vs. Cold Brew

Because cold brew is one of the main ingredients of nitro coffee, it won’t be a surprise to learn that it accounts for much of its characteristics. So, when you try nitro cold brew, you can expect a coffee brewed at room temperature water, with a natural sweetness, lower acidity, and less bitterness than standard black coffee.

Frankly, nitro coffee retains all the elements you’re likely to enjoy in cold brew, and you shouldn’t expect a radically different taste. However, the significant differences are the mouthfeel and appearance. The nitrogen adds the creamy mouthfeel that almost has you believing it’s a coffee with milk. Meanwhile, those tiny nitrogen bubbles add a beautiful foamy top, creamy texture, and overall aesthetic appeal.

Can You Make Nitro Cold Brew Coffee At Home?

The first is to use a whipped cream dispenser with N20 cartridges. Prepare your cold brew coffee, then pour it into the dispenser. Next, add the N20 cartridge, then shake the dispenser for 30 seconds. Finally, turn the machine upside down and dispense the coffee.

A more efficient way to make nitro cold brew at home is to use a nitro dispenser. This dispenser looks like a whipped cream dispenser but is only for making nitro coffee. You’ll need N2 cartridges this time, which offer the smoothest, creamiest texture and best head for nitro coffee. First, pour the cold brew into the dispenser, then screw on the lid. Next, screw on the cartridge until there’s a hissing sound, then shake it for 30 seconds before turning the canister upside down and dispensing the coffee.

Finally, you can use a nitro keg system such as Royal Brew, which is perfect for making larger batches. There’s a keg for holding the coffee, a cap with a valve, a spout with a handle, and a faucet for releasing the coffee. Another good thing about a keg system is it’s compatible with both types of cartridges. You first fill the keg with the cold brew, put the components together, and add your cartridge. Next, you shake the keg for between one and two minutes and place it in your fridge for an hour. Finally, dispense your coffee and keep it for up to 10 days in the keg.

The short answer is “yes.” That’s because of the natural sweetness of the coffee, meaning it won’t need any calorific sugar or milk to add sweetness. So, even though the taste isn’t too dissimilar to a cappuccino or latte, it’s significantly lower in calories, making it a refreshing, dairy, and sugar-free alternative. Of course, the lack of dairy also means it’s also an excellent option for anyone with milk sensitivity.

The coffee also has lower acidity than regular coffee, so if you love coffee but have a sensitive stomach, it may be the answer you’ve been looking for.

Other Benefits Of Nitro Cold Brew

Aside from the health benefits, another advantage of the nitrogen-infused drink is that when you remove the air, the product is sealed, which won’t oxidize and deteriorate the taste. So, if you’ve made nitro cold brew, it should keep in the fridge for at least 10 days and possibly as long as two weeks. This means you can make larger batches because they will be good for a while. This can be hugely convenient, particularly as a time-saver if you’re otherwise rushed in the morning and don’t have time to prepare coffee from scratch.

Don’t Want To Make It Yourself?

Even though it’s not difficult to make nitrogen coffee using the proper tools, the cold brewing process does take a long time to make a cold brew concentrate. You need to steep ground coffee in cold water for 12 to 24 hours.

However, there are ways to enjoy nitro brew coffee even if you don’t want to wait for a day for a cold brew to extract fully. Let’s examine those options.

This nitro cold brew is made with the company’s small-lot coffee beans and infused with nitrogen. It has 280mg of caffeine per 16fl.oz serving.

This is made using Starbucks’ Toddy cold brew maker, where the coffee grounds steep for 20 hours. The result is a soft citrusy flavor with deep syrupy sweet notes in the coffee. The texture is added with the infusion of nitrogen gas.

As its name suggests, this option is topped with sweet vanilla cream. It offers 265mg of caffeine per 16fl.oz serving is higher in calories, with 70 instead of five.

If you want to learn more about the caffeine in Starbucks Nitro cold brew, we explained it in another article.

Several alternative brands offer nitro coffee in cans. These include High Brew Coffee, Lavazza, and Rise Brewing. There are different flavor options too.

Nitro coffee is rapidly growing in popularity, and it’s not difficult to see why. The drink looks beautiful and tastes nice, with a sweet flavor and delectable, creamy mouthfeel.

There are other benefits, too, including the fact it’s healthier than milk-based coffees with a similar flavor, while it’s also a great option to make in large batches for convenience.

Overall, nitro cold brew coffee is a fantastic and distinctive summer option, whether you buy at your local Starbucks or make it at home.

Can you make nitro hot coffee?

Unfortunately not. The working temperature for most nitro cold brew coffee makers is between – and 30 degrees C. As a result, you can’t pour in hot water and coffee and infuse it with nitrogen. Of course, one option is to reheat the coffee after it’s brewed, but we recommend enjoying it as intended – a refreshing cold brew for the summer months.

Is it safe to drink Nitro Cold Brew?

Yes, it’s completely safe to drink. Nitrogen gas has a long history of being used in beverages going back hundreds of years. It’s the same gas that’s often used in beers. It is safe to consume and acts as a carbon dioxide alternative.

Does nitro cold brew have alcohol?

While a beautifully poured nitro cold brew certainly resembles a dark beer, it actually doesn’t contain alcohol. The only ingredients used in the drink are coffee, water, and nitrogen gas.