What Is Arabica Coffee – Origin, Variations, Taste, And More

October 1, 2022October 1, 2022 // Chris Clark
Last Updated: October 1, 2022
We review and suggest products independently, but if you buy a product via the links in our posts, we may earn an affiliate commission at no cost to you. 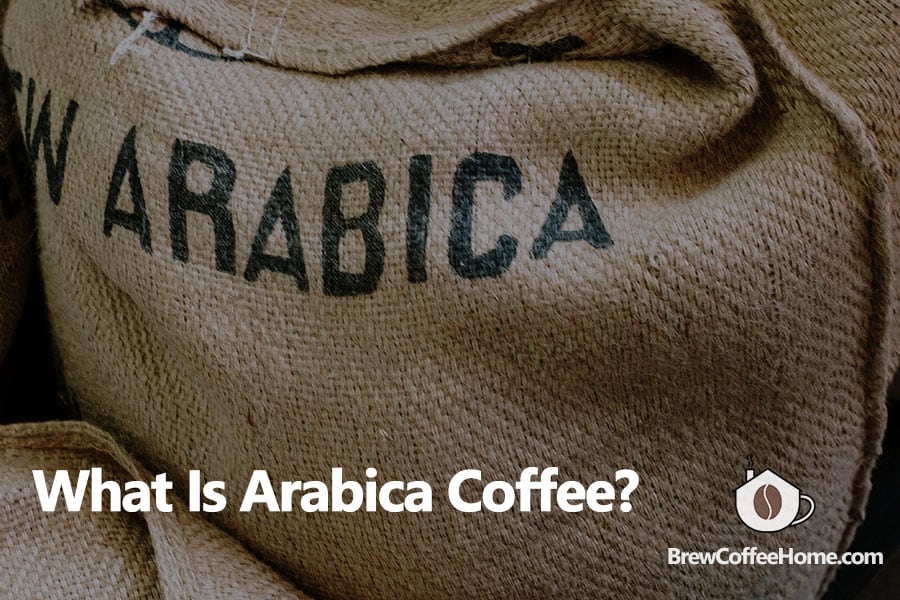 Arabica coffee is extremely popular. You’ve probably noticed your coffee brand of choice claiming 100% of Arabica coffee beans. But what does that mean?

We’ll talk you through everything you’ve ever wanted to know about Arabica coffee. What it is, where it comes from and why it’s superior to other kinds of coffee you might be tempted to buy.

What Is Arabica coffee?

Arabica coffee bean comes from the coffee cherry of the Coffea Arabica plant.

Although Arabica coffee originates from Ethiopia, these days you find this type of beans in many different coffee-growing regions. Its popularity among coffee drinkers means you find it thriving in places ranging from Africa to Latin America, especially Indonesia and Brazil.

Today, more than 60% of coffee in the global production industry derives from Arabica coffee beans. The rest are Robusta coffee beans.

Arabica coffee has an interesting history. Originally, Arabica coffee came from Ethiopia, specifically from the Coffea Arabica plant. It’s also a little-known fact that coffee, whether Arabica or Robusta, is a fruit. The berries get lost in the coffee processing, in favor of the beans.

And the story of the Arabica bean is an interesting one. Supposedly, an Ethiopian farmer became aware of coffee’s energy-boosting effects after noticing his goats had more than their usual spring in their step.

Exploration of the nearby foliage revealed the coffee berry, which the excited shepherd took to the local monks. The monks couldn’t see the benefits of coffee, but others could and did. They harvested the Arabica beans, and the rest was history.

A less-apocryphal story traced the origins of Arabica coffee to 800 AD, when men drank coffee for reasons ranging from the medicinal to the religious.

Types of Arabica Coffee – Are All Arabica Beans the Same?

But are all types of Arabica coffee beans the same? It’s an understandable question because over time, several types of Arabica bean have emerged. Here are some of the most common variations and how they are similar and different from one another.

Typica is one of the oldest types of Arabica coffee. It traces back over millennia and comes in several subtypes, including

Although it’s high-quality, its yields are low, and it is more vulnerable to pests and rust than other types of Arabica.

As a sub-species of Typica, Bourbon is prone to many of the same diseases, like rust and coffee berry borers.

It’s popular with coffee drinkers for its beneficial properties.

Whereas Bourbon is medium-yielding, Catuai is a high-yield Arabica variety. That means it produces significant quantities of coffee fruit and bean.

It’s extremely susceptible to leaf rust, more so than other Arabica varieties discussed.

It’s also a compact plant. Despite this, its beans are average size and create a strong, tasty cup of coffee.

The Catimore variety of Arabica first appeared in Portugal in 1959. Farmers created it by cross-breeding the Timor coffee plant with the Caturra plant.

They chose Timor because of its demonstrable resistance to leaf rust. The result is a fast-growing, high-yielding coffee bean.

Unlike other Arabica beans, it can grow at significantly lower altitudes than other plants, which makes farming easier.

When grown properly, it creates a rich, complex cup that is spicy and has peppery notes.

Gesha coffee, like many kinds of Arabica coffee, comes from Ethiopia. These days, it also grows in

It gets its name from the British, who tried, back in 1936, to transliterate the original name into English.

Gesha produces a sweet coffee, and its sweetness depends on the ripeness of the coffee fruit when harvested.

The Caturra variation of Arabica coffee appeared on a Brazilian coffee estate during the First World War. It’s a mutation of Bourbon.

Like many Arabica varieties, these coffee plants are dwarves that produce moderate to average size coffee beans.

Catura also suffers from many of the diseases that plague Arabica coffee plants, including

Where Is Arabica Coffee Grown?

Consequently, one of the best habitats for Arabica coffee plants is on the side of volcanoes. Unlikely as it sounds, volcanoes offer the necessary elevation to help these plants thrive and are incredibly mineral-rich, resulting in a healthy, happy Arabica coffee plant.

Arabica coffee beans vary depending on their subtype and growing regions. Some, like Gesha, are sweet, while others, like Catimore, have spicy undertones.

However, some things are consistent across Arabica coffee beans. For instance, they lack the heft of Robusta beans. That produces a lighter-bodied coffee without the intensity or caffeine content of Robusta.

Arabica beans smell like blueberry and are also sweeter, making them ideal for coffee drinkers who find Robusta bean too astringent. But its acidity is also higher than Robusta, which should also factor into your coffee bean choice. That’s why many instant coffee or coffee blends use both Arabica and Robusta coffee for a more balanced taste.

Is Arabica Coffee the Best?

Often, specialty coffee roasters like to market their beans are 100% Arabica. What they’re really saying is that theirs is a high-grade coffee with an excellent taste.

Many coffee lovers like to compare Arabica Vs. Robusta. It’s difficult to say because coffee preferences are personal. Arabica beans indeed have higher sugar content, acidity, and more complex flavor profiles compared to Robusta coffee. That said, many marketers and coffee drinkers would argue there’s a better quality to Arabica coffee. Indeed, most of our best coffee bean collections are Arabica.

Is it the best? Pour a cup and decide for yourself.

Arabica coffee is an excellent-tasting, high-quality coffee bean native to Ethiopia. It has a fascinating history, which is almost as complex as the drink it produces.

For many, it’s the coffee bean of choice, but that’s a matter of personal preference. You’ll have to buy and sample some yourself to see if it’s the right coffee bean for you.