Adding Salt To Coffee – Does It Improve Taste And Reduce Bitterness?

August 16, 2021August 16, 2021 // Chris Clark
Last Updated: August 16, 2021
We review and suggest products independently, but if you buy a product via the links in our posts, we may earn an affiliate commission at no cost to you. 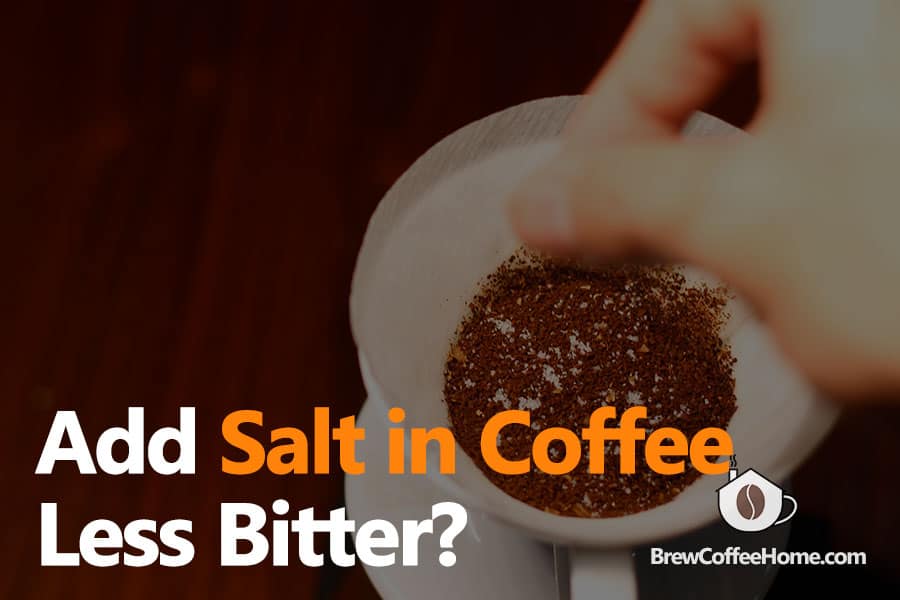 Traditionally, milk or sugar is added to coffee, but that’s not all you can add to improve the taste. Many coffee lovers think that adding some salt to their beverages helps eliminate the bitterness and brings out the flavors. However, some people remain unconvinced. So, is adding salt to coffee genuinely effective? We have looked into this and conducted a few experiments to get to the bottom of this question. This guide examines the results.

Contents show
1 Why Putting Salt In Coffee Became Popular
1.1 Adding Salt To Coffee Isn’t New
1.2 Alton Brown Contributed To Its Popularity
2 Does Adding Salt Improve The Taste Of Coffee?
3 How To Add Salt To Coffee – We Put It To The Test
3.1 How Much Salt Do You Need?
3.2 What’s The Best Type Of Salt To Use?
3.3 Should You Add Salt In Coffee Grounds or Brewed Coffee?
4 Why Does Your Coffee Have A Bitter Taste?
4.1 The Chemical Compounds In Coffee
4.2 The Extraction
4.3 Instant Coffee
5 Advantages Of Putting Salt In Coffee
5.1 Sugar Alternative
5.2 Avoids Low Sodium Levels Because Of Caffeine Intake
5.3 Levels Out Tank-Stored Water’s Stale Taste
6 Any Disadvantages?
7 Our Verdict: It’s Worth A Go

In various places worldwide, putting salt in coffee has been commonplace for many years.

Adding salt to coffee is a critical element of coffee brewing in Scandanavian countries, Siberia, Hungary, Turkey, and other regions. For example, Turkish tradition dictates that brides-to-be make coffee with salt for her partner and his family as part of a pre-marriage ceremony.

There are also places by the coast where the saltwater of the sea mixes with the freshwater rivers. This brackish, salty water is added when making coffee in some European coastal areas. In Northern Scandanavia, people have placed salt in their coffee for generations.

Alton Brown Contributed To Its Popularity

Brown didn’t pioneer the concept of putting salt in coffee, but he was responsible for it gaining widespread traction. Nowadays, many coffee enthusiasts refer to the method as the “Alton Brown Trick.”

Here’s the footage of Brown demonstrating the method on Good Eats.

Does Adding Salt Improve The Taste Of Coffee?

Salt is known for being one of the five basic tastes: sour, sweet, salt, bitter, and umami. The human tongue has a series of taste receptor cells and taste buds for picking out every basic taste.

The cells also detect a range of tastes at different levels of sensitivity. This means that the tastes combine, sometimes enhancing and sometimes smoothing them out.

In general, saltiness brings out the sweetness, and it can reduce or eliminate bitterness.

Without delving too deeply into the science, this quote from Science Focus should suffice:

Salt is used as a universal flavour improver because at low concentrations it will reduce bitterness, but increase sweet, sour and umami, which is desirable for sweet recipes.

Why does salt enhance flavour? – https://www.sciencefocus.com/science/why-does-salt-enhance-flavour/

How Much Salt Do You Need?

According to theAlton Brown Trick, you need to use a quarter of a teaspoon of Kosher salt to 6 tablespoons of coffee grounds. Honestly, that’s very confusing and may not work for everyone.

When making coffee, we prefer not to use units such as pinch, scoops, teaspoon, shake, et cetera, as they are not specific measurements. We recommend using a coffee scale with grams. That way, you can weigh a precise amount and iterate until you find the right level for you.

The amount can also differ depending on the type of salt you use, whether it’s sea salt, kosher salt, or table salt. If you weigh salt using a Timemore Black Mirror coffee scale, it can measure to 0.1g.

Our sweet spot is about 0.1 grams of salt for a cup of freshly brewed pour-over coffee (approximately 200ml). And for instant coffee that tastes bitter, 0.2 grams is good. If we add more, that cup of coffee is noticeable salty. If you don’t bother weighing, just a very small pinch of salt will work.

In order to show you how much salt is suitable in our preference, here is a photo. As you can see, it’s just a very small amount of table salt.

We prefer to add salt after brewing, so we can start from a very small amount then taste the coffee. If it is not enough, add more. It’s more flexible and not likely to ruin the whole pot of coffee.

What’s The Best Type Of Salt To Use?

Kosher salt’s grains are large, which makes them ideal for the process of koshering. If you let the salt dissolve in the food, though, there’s little difference between it and table salt.

Bear in mind that a teaspoon of kosher salt is considerably lighter than a teaspoon of ordinary salt, Don’t use a 1:1 ratio for replacing one with the other as your drink will be too salty. We have experimented with regular table salt and have concluded that any salt is suitable, so don’t overthink this.

Should You Add Salt In Coffee Grounds or Brewed Coffee?

Many people recommend adding salt to the ground coffee before you brew. Meanwhile, others think adding salt after you brewed the coffee is the best option. Because you’ll only use a small amount of salt, we don’t think it matters. After testing both methods (We are quite serious), we find that the difference in taste is not very noticeable.

However, putting salt in the coffee once brewing is complete offers greater control. You can begin with a minimal amount and increase in increments until you are satisfied. We each have different tolerance levels for salt and bitterness, so you must find the level to suit your tastes.

Why Does Your Coffee Have A Bitter Taste?

The Chemical Compounds In Coffee

With coffee bitterness, a compound you’d often test is caffeine. Caffeine is inherently bitter. However, it only counts for a small proportion of coffee’s overall bitterness. If you drink decaf coffee, you’ll be aware that even with so much caffeine removed, the coffee is still bitter.

Most of the bitterness comes from phenylindanes and chlorogenic acid lactones. They appear while roasting and are related to the time it takes to roast the coffee beans. More phenylindanes are released in darker roasts, which is why coffees of that nature are more bitter. Different coffee beans may also differ in bitterness, some low-acid coffee beans naturally have lower bitterness but higher acidity, while robusta is more bitter than Arabica.

The process you use to brew coffee affects the bitterness. Coffee will have a more bitter taste the longer you steep it, use boiling water or use fine grounds. This leads to more water-insoluble grounds making their way into your cup.

Coffee also has a bitter taste when it’s left on a hot plate for too long. The rich and rewarding taste of freshly brewed coffee starts to break down. When your coffee stands on a source of heat for too long, the water begins to evaporate. You’ll then have a concentrated and stale flavor that leaves a lingering sourness in your mouth. Altering your brewing habits can improve your coffee taste.

If you make instant coffee rather than coffee with freshly brewed beans, your taste buds are more likely to experience unpleasant bitterness. Many coffee drinkers have discovered that putting salt in the coffee made a significant improvement to the mouthfeel and flavor of poor-quality instant coffee. It won’t turn your NESCAFÉ CLÁSICO into Geisha, but taste better than NESCAFÉ Gold.

Advantages Of Putting Salt In Coffee

Apart from reducing the bitterness of coffee, what other benefits can you derive from adding salt to coffee?

Many coffee enthusiasts put milk and sugar in black coffee to reduce bitterness rather than because they prefer sweet coffee. Salt offers a viable alternative.

There is a range of health benefits to drinking coffee. It has essential nutrients, including magnesium and potassium, and is filled with antioxidants. Coffee also assists in fighting diseases affecting the brain, such as Alzheimer’s and dementia.

Coffee on its own is virtually calorie-free, while it can also boost your energy and adrenaline and trigger fat-burning.

Of course, the effects are negated if you add things like cream, sugar, and syrups to coffee. This can also lead to health complications, including weight gain because of the high levels of sugar.

This video explained why salt make food taste better and also points out studies found that salt is better at reducing bitterness than sugar.

Caffeine affects your urinary production – in other words, it increases the amount you need to pee. When you pee more, your body turns more sodium into waste. To offset this, some people add salt to the coffee.

So, a small amount of salt in your coffee not only reduces the bitterness but also helps you maintain your health.

Salt helps improve the water. Alton Brown explained that water that stands in the coffee maker can become stale over time via his Facebook page. The quality of any coffee you brew will be dependent on the quality of the water, so using stale water will harm the finished product. So, adding a little salt can improve the overall quality. It will also add density to the water, lending your beverage a thicker quality.

It’s entirely possible you won’t detect such a subtle improvement, and we always opt for fresh water and fresh beans for the best-quality coffee.

Health-wise, we don’t see any issue with adding a small amount of salt to your coffee. Any disadvantages in it are no different from adding salt to anything else.

During our experimenting, a small amount of salt (0.1 to 0.2 grams) improved the flavor of the coffee and led to a smoother taste. However, finding the right balance is vital as too much salt will lead to the coffee becoming too salty to taste.

Our Verdict: It’s Worth A Go

Putting a little salt in your coffee is an effective trick, especially if you don’t like the bitterness in coffee.

However, it comes down to preference, as some people may not notice the reduction of bitterness salt brings than others. You’ll have to experiment to see if it works for you.

We enjoy the bitterness in coffee, as long as it’s balanced with acidity and a little sweetness. After all, the flavors in coffee are complex, with bitterness an element of those. We enjoy the unaltered flavors of coffee and always look for the optimum taste when brewing coffee.

However, in the same way that adding cream, milk, or sugar can improve the taste, salt might make it more pleasant for you too. For that reason, it’s well worth giving it a go.