Baratza Virtuoso Review: A Closer Look At The Virtuoso Plus

December 16, 2021February 18, 2021 // Chris Clark
Last Updated: December 16, 2021
We review and suggest products independently, but if you buy a product via the links in our posts, we may earn an affiliate commission at no cost to you. 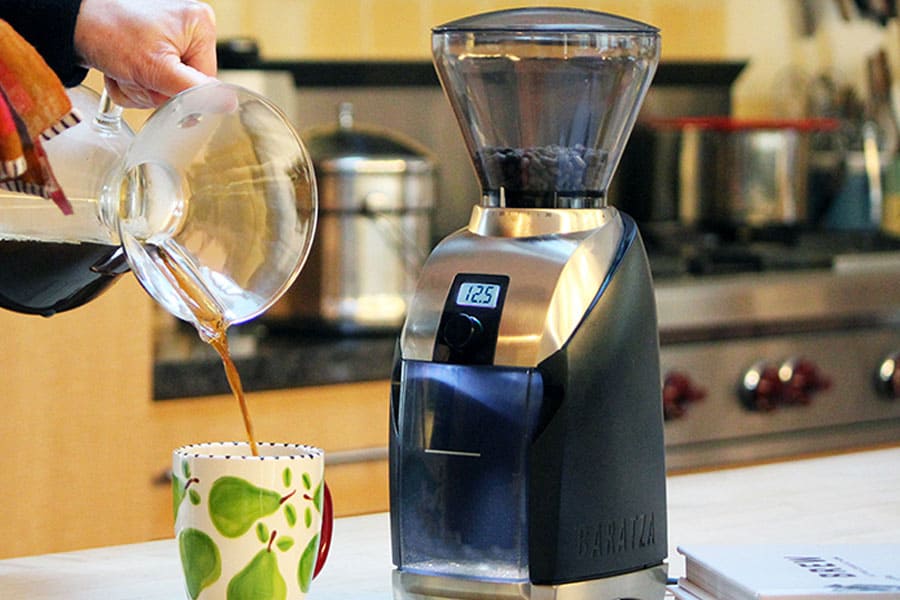 If you’re serious about making consistently excellent home-brewed coffee, one of the best investments you can make is a high-quality burr grinder.

Formed in 1999, Baratza swiftly established itself as one of the most popular brands for coffee grinders. If you heard of the Baratza Encore, one of the best-selling burr grinders for home brewing, its big brother should be on your radar as well.

This Baratza Virtuoso+ review will examine in detail the pros and cons of this popular product to help you work out if it’s the right fit for you.

See On Amazon
See On 1stInCoffee

What We Love About It

What We Dislike About It

At first glance, the Baratza Virtuoso+ coffee grinder looks both sturdy and reliable, which is precisely what you would want from a burr coffee grinder in this price range.

The front of the grinder’s body houses a digital display with an LED backlight and a circular knob. The top and base of the grinder are made of sculptured stainless steel, while the chassis is a smart black. Overall, the impression it gives you is one of high-quality, and more so than the smaller Baratza Encore, which is the company’s entry-level burr grinder.

Another nice touch the Virtouso+ has is a blue LED on the grounds bin that lights up while grinding occurs, so you can see clearly during the grinding process.

Considering all these features, we think this is one of the most beautiful-looking coffee grinders we’ve seen. It oozes class and is the kind of product you’d love to have on display for friends and guests to see.

Operating the Baratza Virtuoso+ is relatively straightforward. Adjust the bean hopper to the grind size you want, then turn the timer knob to the grinding time you desire. Finally, press the knob to begin grinding.

There is a learning curve in figuring out the different grind settings of the Virtuoso+. However, once you’ve got to grips with the precise time needed for grinding the particular amount of coffee grounds you desire, you’ll have the exact required dose for brewing without having to weigh your coffee beans. That’s incredibly useful.

Another benefit of the Baratza Virtuoso+ is the pulse-grinding setting. It’s a simple case of pushing the pulse button to begin pulsing and releasing it to stop. Even better, the digital readout will show a “P” to let you know when you’ve activated the pulse-grinding mode.

The Virtuoso+ grinds at between 1.5 and 2.4g per second, allowing you to grind more coffee beans in less time. When you begin grinding, the blue LED light, situated on the grounds bin, lights up the interior of it so that you can keep a check on the ground coffee.

All this means you can say goodbye to complex settings and buttons with this Virtuoso grinder. Indeed, even those new to home coffee brewing will be able to operate the Viruoso+ with few issues.

The Baratza Virtuoso coffee grinder measures 4.7 x 6.3 x 13.8 inches. This means it is compact enough to put away in a kitchen cabinet without taking too much space.

However, it’s such a visually appealing product that we can’t see why you would want to do that! Another consideration is its weight – at 8lbs, this is quite a heavy grinder, which means moving it to and from a cupboard each day won’t be particularly convenient.

The bean hopper is constructed from food-grade plastic that is transparent, it can hold 8oz of coffee beans. The LED-backlit ground bin, meanwhile, has a 5oz capacity.

Quality Of The Burr And Motor

The Baratza Virtuoso+ comes equipped with 40mm steel burrs. Constructed in Europe, this steel conical burr set is one of the best quality around. As a result, they’ll give you years of durability and grind consistency before you even need to consider replacing them.

The Baratza Virtuoso+ houses a high-torque DC motor alongside a gear reduction system that helps the conical burr turn at a consistent rate of 550 RPM. Because of the DC motor, the virtuoso burr grinder can run cooler than similar home grinders on the market while being so compact. It’s also faster and quieter than the Baratza Encore.

To add protection to the steel burrs and motor, Baratza has also fitted the Virtuoso+ with a thermal cut-off switch, meaning it will avoid overheating the motor due to excess use.

One of the most significant benefits of the Baratza Virtuoso+ is its ability to be used for any type of coffee you desire, thanks to its wide range of grind settings and fantastic grind consistency.

The adjustable hopper boasts no less than 40 grind settings, with each within range by merely turning the bean hopper so that it lines up with the white line and whatever number you want. For example, “0” will give you very fine grinds (which is fine enough for espresso) while, at the other end of the scale, “40” is the coarsest setting (for French press coffee).

Baratza recommends particular settings for certain coffee brewing methods. However, you can tweak these depending on your preference, so we suggest using them as a base and then adjusting from there. Here are the settings suggestions:

Hint: Despite the fact that the Virtuoso+ has only a small number of grind retentions, you should still purge any leftover grounds whenever you adjust the grind setting.

The 40mm conical burr of the Baratza Virtuoso+ makes for consistent particle sizes in the coffee you grind. However, there is a caveat: the higher the grind setting (anywhere from 30 to 40), the less consistency it will achieve.

This is not unusual, though, because the more coarse the grind, the larger gap there needs to be in the burrs, leading to more chunks finding their way between the cracks. Because of this, it is challenging to achieve entirely consistent particle size in coarser settings.

Despite this issue, it’s not enough to spoil either a French press or cold brew coffee. The Virtuoso+ will still make a coarse enough grind at a marginally lower setting that will be consistent enough.

When using grind settings in the middle of the range (between 20 and 30), the grind consistency will be excellent. These are the settings you’ll need for pour over or drip coffee brewing methods, and the Baratza Virtuoso+ is one of the best products around at this price point for achieving those brews.

Towards the lower end of the scale, the product achieves pleasing consistency with the finest grind settings. Even then, though, in our opinion, it’s not enough for a non-pressured portafilter. Because of this, if you’re operating a semi-automatic machine, your best bet is to find a product with even more range or that is exclusively designed with espresso brewing in mind.

The plastic bean hopper, chassis, and grounds bin give the product a sturdy feel, and there’s virtually no flex. Further rigidity comes courtesy of the sculpted metal of the base and top of the device, giving the (justified) impression that the machine can withstand years of regular use.

Baratza is well-known for providing superb customer service with a quick and straightforward warranty. They will handle any issues you have over the phone with simple directions on fixing their coffee grinders.

Not only that, but if anything does break on your grinder, you can order replacement parts. Alternatively, you can simply send the grinder back to Baratza for repair. The company will then take care of everything and return your grinder to you in almost new condition.

The Virtuoso+ comes with Baratza’s first-class support and a one-year warranty, offering some all-important peace of mind.

While the Baratza Virtuoso+ is a robust machine that should work well for years, we still recommend cleaning the burrs once a month if you use it regularly. Basic maintenance such as this can stop dust from getting into the device’s harder-to-reach parts, adding to its longevity.

Thankfully, Baratza has made this process easier by making the top burr of the Virtuoso+ removable to ensure a virtually effortless cleaning routine.

There’s no getting away from the fact that the Baratza Virtuoso+ is one of the more expensive home coffee grinders on the market. If you’re on the lookout for a first grinder or would like to upgrade, there are cheaper alternatives. However, for those not restricted by budget, we believe that you get what you pay for with the Virtuoso+ as it is one of the best burr grinders for making coffee every day.

Baratza Virtuoso+ Grinder: What Does The Plus Mean?

The most significant difference between the two devices is the grind timer. The upgrade has both a digital timer and LCD. This adds to the ease of use for a product that previously had a timer dial located on the side of the main body. It’s not merely a gimmick, either – that digital grind timer really does speed up the process, as well as making it that bit easier.

The advantages of the Baratza Virtuoso+ of its predecessor don’t end there, though. The grind range for the upgrade goes spans from 200 to 1200 microns, whereas the previous model of Virtuoso is limited to 250 to 1200 microns.

The other big difference between the two is the blue light in the grounds bin that we mentioned earlier. As well as being a nice touch from an aesthetic viewpoint, this addition also makes keeping an eye on your ground coffee as they fall into the bin that much easier.

What Are The Alternatives to Baratza Virtuoso+?

If you’re looking for a cheaper option…

For someone who is on a tight budget, the Baratza Encore is well worth considering. Two significant advantages of opting for the Encore are that its motor setup is similar to the Virtuoso+ and has a similar conical burr. It lacks some of the more nifty features of the Virtuoso+, but if your primary concern about is grind quality, it does as good a job – and for around $100 less. Check out the Baratza Encore review >>

If you’re looking for more room to dial in espresso…

For a similar price to the Virtuoso+, you can invest in an excellent espresso grinder that will also allow for plenty of other brew methods. Our pick would be the Breville Smart Grinder Pro.

This home grinder isn’t as good as some of the more expensive coffee grinders built for espresso, but the beauty of the Smart Grinder Pro is that it will allow you to iterate your espresso shots until you find your sweet spot.

Baratza Sette 270 is also an option if you have a larger budget, check out our Sette 270 review here.

Our Verdict – A High-Quality Coffee Grinder for Home Use

The Baratza Virtuoso+ is a high-quality coffee grinder that you can rely on to do a consistent job for years. It’s great for plenty of different brews, too, so whether you’re grinding for AeroPress, pour over, or French press, it is incredibly reliable.

Having said that, if you’re more interested in grinding for espresso, the Virtuoso+ can be a bit fiddly, as you’ll need to tweak and calibrate. Because of that, if you’re in the market for an espresso grinder whose settings you can tweak until it delivers the perfect shot, it might not be your best option.

If you can see past that slight disadvantage, the Virtuoso+ is a sturdy, well-built product that comes with a considerable number of grind settings that will grind consistently. Yes, it’s expensive, but for the extra money, as long as you’re not using it exclusively for espresso, it may well be the last grinder you’ll need to buy.