AeroPress Vs. French Press – Which Is Suitable For You? 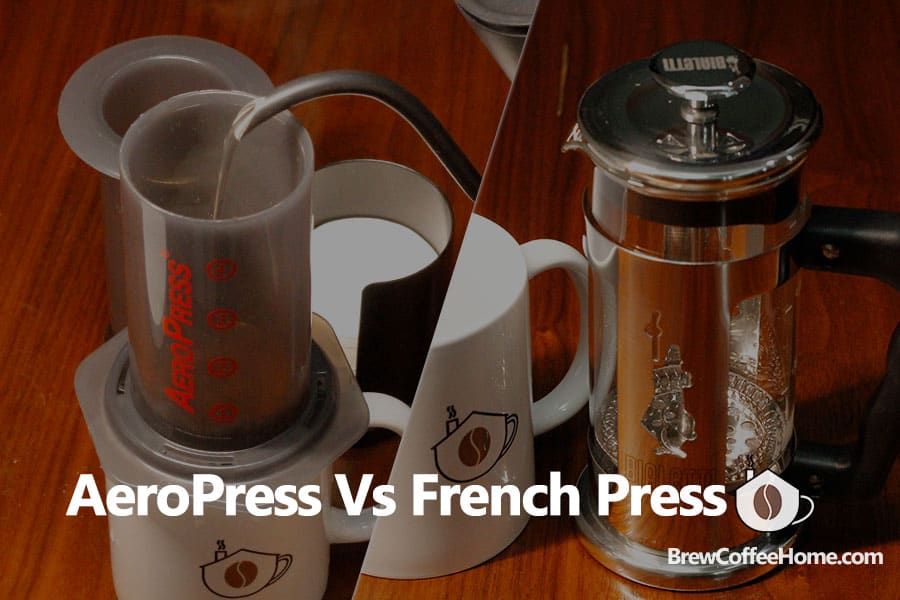 Coffee lovers who enjoy high-quality roasts are keen to get the best results when brewing their coffee. Drip machines are convenient, but they produce brews that are sometimes inferior. So, coffee connoisseurs use various brewing methods to improve the flavor of their coffee, including the pressing process.

In the past, the pressing method was done with a simple and handy tool called a French press. Now, there is a competitor for the crown of presses. The AeroPress is a newer brewing device that seems to work in a similar way as the venerable French press, but actually, they are quite different in many ways. Since they’re locked in ongoing competition, there is a debate between using an AeroPress Vs. French press.

Which is suitable for you and your coffee-making needs? Let’s find out.

What Is the AeroPress?

AeroPress is a relative newcomer to the coffee scene. The Aeropress is the brainchild of Alan Adler, the president of AeroPress. It first hits stores in 2005 and has become quite popular, not just because it makes a clean cup of coffee fairly quickly, but also is super portable, versatile, and affordable.

It’s a pistol-style coffee maker, where you pour hot water into a chamber with finely ground coffee. Then, after steeping and agitating the coffee grounds, the user presses the piston down, forcing the liquid through a filter cap and into a cup. The resulting brew is free of any sediment, thanks to the paper filter.

When finer coffee grounds come in contact with the hot water added to the brew chamber, they release their flavor much quicker. After only about a minute, you can use your hand to drive the piston down and pass the coffee through the paper filter, resulting in a very quickly brewed cup of coffee.

Aeropress coffee tastes similar to the concentrated drink you get from an espresso machine. It’s also one of the most versatile coffee brewing methods. You can make Americano, Espresso-style concentrated coffee, cold brew coffee, and more. Many coffee drinkers all over the world are sharing their recipes online.

Who Is AeroPress Suitable For?

The Aeropress is ideal for people making one cup of coffee at a time. It also works well for anyone who wants their coffee fast and completely grit-free and those who like experimenting with different brewing recipes.

What Is a French Press?

The French press is iconic in the coffee industry. It is a more traditional coffee-brewing method with roots in early 20th century Italy. The invention led to modifications and developments, and versions of the French press exist in cultures and countries worldwide.

The plunger is like a piston with a handle on top that allows you to drive a mesh screen down through the water, separating it from the coarsely ground coffee. Brewing coffee with a French press is easy, first place the coffee grounds into the carafe, followed by a bath of hot water.

Then the lid and plunger assembly are set on top. When the coffee has steeped long enough, usually between three and five minutes, it’s time to depress the plunger. Doing so forces the screen down through the water, and you can then remove the lid and pour a cup of coffee.

Who Is French Press Suitable For?

A French press is suitable for anyone who likes strong coffee and doesn’t mind a bit of grit in their cup.

Difference Between AeroPress and French Press

The AeroPress is made from a combination of BPA-free polypropylene for the housing and brewing chamber, a paper filter, and a plunger with a silicon seal. It’s lightweight and designed for portability and is only about 5.4 inches tall. The AeroPress Go takes that on-the-road mentality to the next level with a nesting design for easy, compact carrying. This smaller version of the AeroPress is only 4.6 inches tall! Check out our hands-on review of AeroPress.

Many versions of the French press exist, made by different brands and in varying volumes. They typically come with a glass carafe, you can also find many stainless steel french presses. Though the design and operation are usually fairly standard, there are even some variations on the idea, like stainless steel insulated presses to keep coffee hotter longer. You can also find different french press filter designs, some are basket, and some are single or dual filters.

At their heart, all French presses have a water chamber, plunger, and mesh filter. Here is our round-up of the best French Press coffee makers.

The AeroPress is versatile and effective, plus you can brew in two methods. The packaging explains the standard AeroPress method, which is quite simple. Place the filter-side of the chamber onto the top of your mug, and then add your coffee. Now, add your water, stir and wait one minute, and push the plunger down.

Alternatively, you can use an inverted method, where the AeroPress starts with the filter-end on top, sitting on a counter. Add the coffee, add the water, close the lid, flip the AeroPress on top of your mug, and plunge it into your cup below. If you’re looking to fine-tune your results, you can find entire libraries of creative recipes online.

Here is the detailed instruction on making Aeropress coffee.

Making coffee with a French press is also relatively easy to use. All you need is a coarse grind and hot water. Let the coffee grounds sit for 4 minutes then press the plunger down.

AeroPress can brew coffee very flavorful coffee, as it takes on a lot of flavor from the fine grounds quite quickly. You can easily make a cup of coffee that resembles espresso in its strength and concentration.

Since the brewing time is so short, the resulting coffee drink is usually free of most of the coffee bean’s inherent bitterness, which is less oily.

For campers, commuters, travelers, and anyone on the go who wants the convenience of a press coffee maker to take along with them, this is a handy device that yields a delicious brew and requires no electrical power. You will, however, have to heat water and grind coffee beans.

French presses yield a cup that is robust and rich, with a deep flavor. That means it can also taste quite bitter if coffee steeps for too long. The mesh filter doesn’t screen the coffee as finely as AeroPress’s paper filter. The result is that cups of French press coffee leave a slight residue at their bottom. However, it allows natural coffee oils to get in the coffee drinks, this is one of the French press pros for many coffee enthusiasts.

Brew Time – From Beans to Cup

Let’s assume that it takes the same time to grind your coffee and boil your water regardless of which device you’re using to make your coffee.

From that point onward, the AeroPress has an advantage over the typical French press because it only takes a quick one to two minutes for a completed brew.

The French press will typically take three or four minutes or even more.

Making cold brew coffee is possible with both Aeropress and French press, which takes significantly longer. Here are the tutorials and brewing tips:

A French press has a metal filter, whereas AeroPress uses paper filters that sift the coffee far more finely. The result is that the brew in your cup is quite clean, unlike a French press brew that notoriously has a bit of sediment as some grinds pass through the filter.

To take advantage of that filter, limit the steeping time, and minimize the uptake of oils and bitterness into the water, use a finer grind in an AeroPress like you would for an espresso. This will speed steeping.

Conversely, when you’re using a French press, you want coarse ground coffee so that they are more likely to end up in your filter than in your cup. That larger grind also means that it takes a bit longer to brew your coffee, increasing the bitterness, caffeine, and oil transferred to the water, resulting in the dark drink in your cup.

An AeroPress is a single cup coffee maker, the Aeropress Original makes up to 10 oz of coffee, while the Aeropress Go can make eight ounces per batch. Or, use it to make up to three espresso-style coffee and dilute it into more than one cup with hot water according to your taste preferences.

A French press’s capacity varies tremendously from brand to brand. Some travel sizes aren’t much bigger than an AeroPress, which can also make a single cup (8-12 oz) at a time. But 32 ounces capacity is common, and there are some products that allow you to brew more than fifty ounces of joe at a time.

The AeroPress is affordable, and that’s a trivial cost compared to many automatic coffee makers. Many coffee drinkers love to use it as a cheaper alternative for entry-level espresso machines. The AeroPress Go costs the same as the original, but the base doubles as a cup, so you don’t even need a separate mug.

The cost of a French press can vary wildly, based on the materials used to make it, the quality, and the design. Typical models are around the same price as an AeroPress, but you can also spend more on designer models that match your decor and promise to keep your coffee hot for hours.

Since the AeroPress aims for faster brewing and has a paper filter, finely ground coffee is the preference. That fine grind transfers its flavor to the water, letting you plunge it through the filter sooner than with a French press filled with coarse grinds appropriate for its paperless filter.

The water to coffee ratio and the strength of the coffee beans themselves are far more influential on the caffeine content of your brew than how you made it. But, the longer steep time with a French press may increase the caffeine level slightly.

Here’s the bad news: There really is no winner in the battle of AeroPress versus French press.

They both offer a flavorful cup of coffee, and you can easily adjust the water to coffee ratio to your preference. The AeroPress is ideal for coffee drinkers who like to brew on the road or at the campsite, as they are more rugged than the typically fragile glass French press. However, French presses offer a more robust and thicker brew and are available in a variety of styles and capacities to suit your needs and decor.

It’s a matter of personal taste which brewer and what kind of coffee you prefer. But the good news is that you can buy both of them for a modest sum of money and enjoy exquisite coffee easily!

Contents
1 What Is the AeroPress?
2 What Is a French Press?
3 Difference Between AeroPress and French Press
4 The Verdict